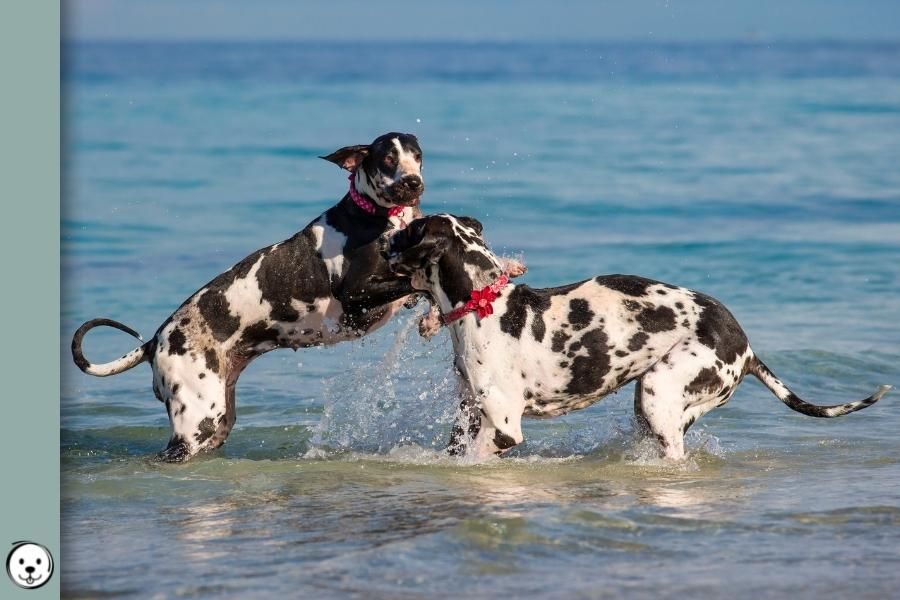 The Harlequin-Locus in Great Danes acts as a merle modifier. Harlequin turns the semi-random patches with reduced eumelanin found in merle patterns to white. This creates a white base color with dark irregular patches that match the dog’s regular pattern.

Harlequin is not the same as harlequin merle (Mh)!

What is Harlequin in Great Danes?

What exactly is harlequin?

Harlequin only affects dogs that express a merle pattern (H/h M*/-). Without being merle (H/h m/m) a dog can’t produce a harlequin pattern.

Merle by itself reduces eumelanin in some areas and creates semi-random patches with diluted color.

The harlequin modifier increases the size of dark patches but removes all pigment in between those patches so the base color turns to solid white. Sometimes some ticking or single black hairs will grow in the white base color.

Even black merle harlequin dogs are not always only black and white with small patches.

Some dogs can have pretty large mantle patches. And even dilute patches with a grey or brownish shade are normal although purely black and white dogs are preferred by breeders.

Not all of the affected dogs are bred from solid black Great Danes, combinations with other colors and patterns can create different porcelain or Porzellantiger colorations:

On a blue Great Dane with diluted pigment and merle, all the harlequin patches will be blue which is called blue harlequin.

Harlequin not only affects eumelanin (black pigment), unlike merle it also has an effect on phaeomelanin (yellow pigment).

On a sable merle, only the black hair tips or a black mask would normally be affected by merle. But harlequin can create a white dog with torn sable patches known as fawnequin.

A brindle merle would normally only have irregular brindle striping but the harlequin modifier again can create a white base coat with torn brindle patches known as brindlequin.

Interestingly, the tiny Yorkshire Terrier is another breed carrying this mutation! But since Yorkies traditionally don’t come in merle there is no pattern that harlequin could modify[2].

Harlequin is an autosomal dominant mutation and also a homozygous lethal trait. Every carrier or affected dog is heterozygous (H/h) since homozygous dogs (H/H) will not be born.

This is the dominance hierarchy of alleles at the Harlequin locus:

There are only 3 possible allelic combinations at this gene.

A potentially reduced litter size is not the only reason to best never to breed from two phenotypically harlequin Great Danes (H/h M*/m). All dogs with a harlequin pattern are also merle so breeding these dogs together can produce puppies with double merle (M*/M*)!

Harlequin removes pigment from a dog’s color pattern. It creates pigmented patches on a white background. But the actual pattern depends on the dog’s genotype.

White spotting can create areas without any pigment as seen in mantle patterns.

On a dog with a harlequin pattern, a white chest patch, bell, tail tip or white legs are just not as obvious because of all the additionally deleted background pigment.

The desired standard color is harlequin on a black merle pattern creating a black and white dog (H/h M*/- KB/- D/-). To produce a dog with evenly distributed patches this pattern is bred from solid black dogs.

Almost solid white dogs with only very few black spots might in some cases be double merle with harlequin (H/h M*/M* KB/- D/-).

In blue Great Danes, all the eumelanin is diluted to blue. So on a bluequin dog all the colored patches will not be black but blue (H/h M*/- KB/- d/d).

Dogs that still have regular merle patches on a white background are not really harlequin!

If they produce typical merle patches that are grey with black hairs and mottles they are in most cases merle with white spotting (h/h M*/– sP/sP) or double merle (h/h M*/M*) or both.

Because this creates a similar pattern to harlequin these dogs are sometimes called merlequin which is a somewhat misleading term since harlequin isn’t actually involved.

Another possible explanation for dogs with large black, grey and white patches might be longer merle variants like Mh or combinations of merle variants (e.g. M/Ma).

These versions of merle are rare in Great Danes but can produce a tweed merle or harlequin merle (not to be confused with H-Locus harlequin) pattern. They express with an increased pigment deletion to white or a combination of pretty big merle, black and white patches.