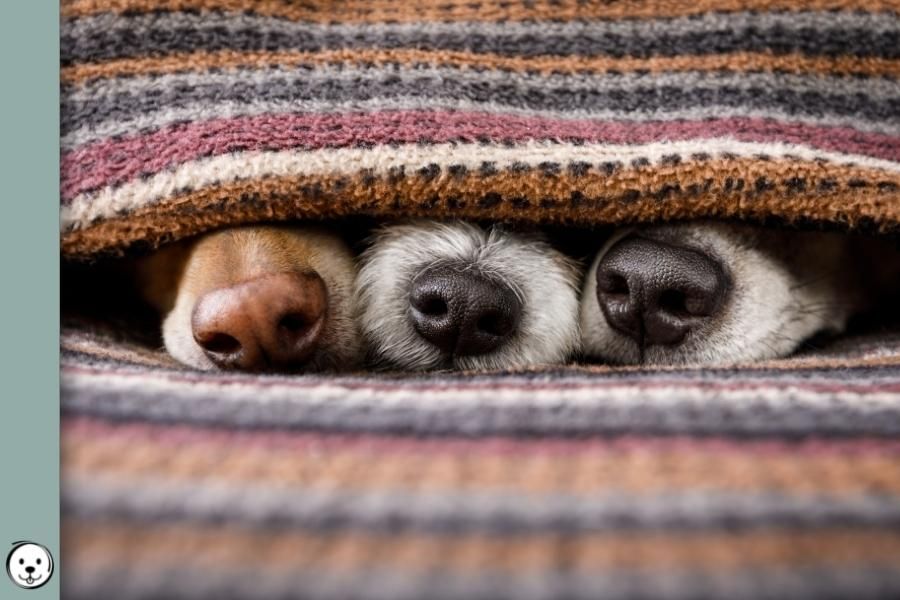 Dogs can have black, brown, grey or lilac noses. Nose coloration can be solid or lose some of its pigment due to various reasons. Here we take a look at all the different versions of nose pigmentation in dogs.

The nose leather, nails, skin, paw pads, eye rims and nails on a dog gets their unique color from a pigment called eumelanin. Eumelanin is black by default but variants at different gene loci can alter the eumelanin color a dog can produce.

Dogs can only ever produce one distinct shade of eumelanin depending on their genotype at the B-Locus and D-Locus. So the eumelanin on a dog is always is either black, brown, grey or lilac.

Many dog breeds are fixed for one of those colors, e.g. all Rottweilers produce black eumelanin and all Vizslas produce brown eumelanin.

A dog with black eumelanin will have a black nose while a dog with brown eumelanin will also have a brown nose (also called a liver nose, chocolate nose or even red nose in some breeds) and so on.

Dogs with eumelanin dilution will have a paler nose color.

The nose color will always match the original color of eumelanin we find in a dog’s coat.

But the nose color doesn’t always mirror the exact shade of eumelanin found in the coat. Nose pigment can be very dense, dark and solid or somewhat pale or weaker than expected. So for example, a brown dog can have any nose color in the range from very dark brown to very light brown.

If the eumelanin color in a dog’s coat and skin don’t match we should first consider if there is something going on with the coat pigment.

Another thing to consider when trying to determine a dog’s pigment colors: The nose and skin always get their color from eumelanin even if a dog does not express any eumelanin in his coat.

Some dogs can only produce the red pigment type phaeomelanin (due to being recessive red or clear sable) or have a white coat (e.g. due to being extreme white).

On solid yellow, red or white dogs the only way to tell the color of their eumelanin is by looking at their skin and nose pigment where eumelanin will still be visible!

Usually, we expect a dog’s nose to be solid-colored. But there are some traits that can meddle with nose pigmentation.

Domino or grizzle are known to often cause a pink stripe down the nose. And recessive red is often associated with fading nose pigment (aka snow nose, dudley nose). White spotting, whitehead or merle on the other hand can remove some nose pigment and cause patches of bright pink on the nose (butterfly nose, part nose).

It’s easy to confuse different versions of pink on a dog’s nose with other types of weak or fading nose pigment.

Please note that some of the terms we use have no clear definition. Some people don’t distinguish between fading nose pigment, domino noses or snow noses.

The most common nose color in dogs is black.

Any dog with a black-based coat pattern like black sable, solid black, black merle or black-and tan will also have a black nose color. And even dogs without any black in their coat will have a black nose if they have neither brown nor diluted pigment (B/- D/-).

Black noses can fade or have pink patches. But since there are not really different shades of black there is not too much color variation in solid black dog noses.

Dogs with diluted black pigment (B/- d/d) will be blue-nosed. In some dog breeds, this nose color is also called grey or slate. Depending on the pigment density a blue nose can look light grey or almost black.

In some cases, it can be hard to tell the difference between a very dark blue nose and a truly black nose.

Dogs with greying coat or atypical merle can look as if they had a diluted coat color. But these traits only affect the coat pigment and not the nose color which will still be black.

Dogs with liver pigment (b/b D/-) will also have a liver-colored nose.

There are different possible shades on the range from dark brown to light brown. Brown noses can have a very dense or very light color.

As with any other nose color, brown noses can fade or have pink patches or stripes depending on the coat color of the dog.

The color palette on dogs with lilac pigment ranges from almost normal brown to very pale brown, sometimes with a purplish tinge.

In many cases, it is virtually impossible to distinguish between brown dogs and lilac dogs by nose color alone. The color ranges of both colors simply have too big of an overlap.

Some dogs are born with a solid nose color that begins to fade after some months. But it’s not clear what causes the nose pigment to disappear.

This type of nasal depigmentation is commonly found in dogs with a recessive red coat color, e.g. Golden Retriever, yellow Labrador or white, yellow or red Poodles. In some cases, fading nose pigment can also happen in dogs with other coat colors. Liver-colored noses seem especially prone to lose some of their intensity.

At least for dogs with a recessive red coat, it’s perfectly normal to lose some of their nose pigment. But is still often considered a non-desirable and non-standard pigmentary defect that breeders try to avoid.

The color change can be permanent but often seems to wax and wane between the summer and winter months. Due to the seasonal nature of this phenomenon, it is also called a winter nose or snow nose.

In some cases, nose pigment can fade until the color is almost solid pink. But usually, there is at least some pigment left around the edge of the nose.

In some dogs with liver pigment, the nose pigment fades to almost pink. This is sometimes called a dudley nose (a Labrador Retriever term for chocolate-based yellow dogs).

Yellow Labs with brown eumelanin (e/e b/b) are a non-standard combination in this breed. These dogs stand out by not only their pinkish nose but also their unusual light green or amber eyes.

Domino phenotypes are overall pretty rare but very common in a small number of dog breeds.

Ancient domino is found in northern breeds like Siberian Husky or Alaskan Malamute, but also in many other types of dogs like some hounds or even Chihuahuas. Grizzle domino is limited to sighthound breeds like Borzoi or Saluki.

Domino restricts eumelanin production in any given coat pattern and lightens whatever pigment pattern it acts upon. And domino can also interfere with nose pigmentation and cause a pink stripe with crisp edges down the middle of the nose!

Not all dogs with domino have a pink striped nose. And not every dog with a striped nose is truly domino-patterned. But it’s still a good guess to suspect domino whenever you see this nose color pattern on a dog.

Traits that can remove pigment from the skin can also cause a lack of pigment in some sections of the nose. Some coat color patterns that can cause pigment loss are merle, harlequin, whitehead or piebald.

Missing pigment on the nose can create some random patterns. Sometimes this is also called a butterfly nose or a parti nose (parti is a term for white spotting in some dog breeds).

Puppies (especially those with a merle pattern) can be born with varying degrees of pink spotting on their nose. But often the missing color fills in during the first months after birth.

If most of the pigment on a dog’s nose is missing the nose can be almost solid pink.

This happens due to extreme pigment fading or because pigment is missing right from the start.

But even in dogs with extended white spotting this is considered quite rare. Most often, such an extensive loss of nose pigment is associated with a double merle phenotype.

A lack of any pigment in the coat or skin is typical for dogs with some form of albinism or other forms of pathological hypopigmentation disorders or scar tissue.