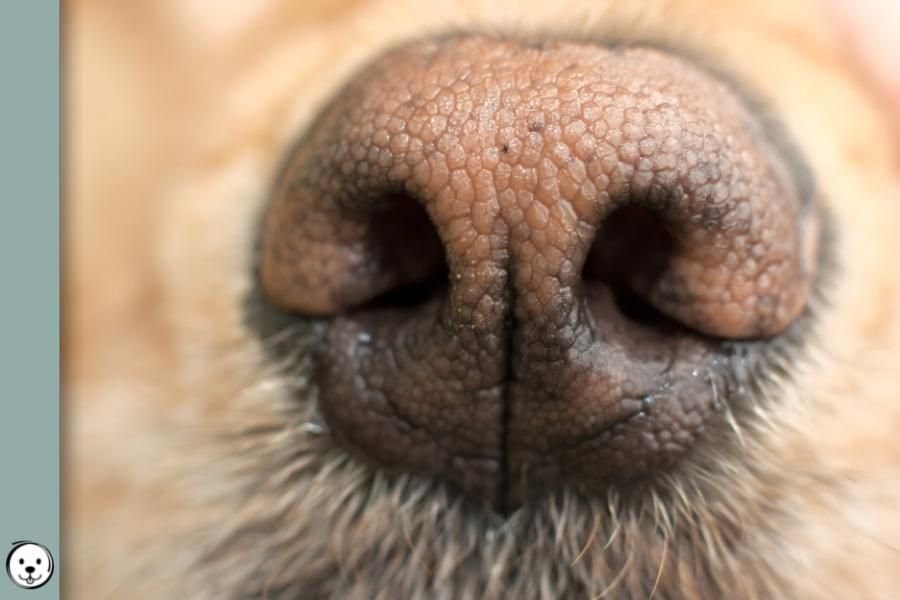 Your dog’s nose is changing color and you try to understand what’s happening? If your dog’s nose has changed its color from black or brown to pink he might have a snow nose. We don’t know exactly why a dog’s nose is losing pigment but it’s most often linked to his coat color.

What is a Snow Nose?

Dogs can have different nose colors depending on the color of eumelanin they can produce. But whether a dog’s nose is black or brown, we normally expect the nose leather to be solid-colored.

But some dogs start to lose some of their nose pigment as they age. Typically this type of nose color fading starts a few months after birth and turns a dog’s nose to a more brownish shade or to pink. Of course, on a black dog (B/-) , the nose will never actually turn brown but rather “translucent black”.

In some cases, the fading pigment is not too bad and affects only the center of the nose.

In other cases, the dogs have a solid pink nose with only some tiny speckles of pigment by the time the color fading stops. Typically, there is some of the original pigment left around the nose’s upper rim.

This type of dog nose pigment change often waxes and wanes during a dog’s life. But it sure can look quite dramatic if a dog’s nose goes from black to pink within just a few months.

In many cases, a dog’s nose is getting lighter in winter and gets back some pigment during summer. Due to the seasonality of this phenomenon, some people call it a snow nose or winter nose.

But there is no official definition for these terms. Some people use the term “snow nose” to describe the nose color often seen in northern breeds due to a domino pattern.

Another term to describe a snow nose on dogs is dudley nose.

Some people use this term to describe all kinds of dogs losing color on their noses. But most often it’s used for especially pink-nosed dogs.

Dogs that have pink noses are often liver-based to begin with. We don’t know why, but for some reason, liver-colored dogs seem to lose nose pigment quite easily.

But dog breeds with a dudley nose include other colors as well. Since there is no fixed meaning for this term dog noses of any possible color can turn almost completely pink and be called a dudley nose.

So, whether your dog’s nose turned from brown to pink or from black to pink you are free to call this a snow nose, winter nose or dudley nose.

We really don’t know what causes some dogs’ noses to turn pink!

But we do know that in many cases a dog’s nose color change seems to be related to his coat color pattern. For one, many dogs with a recessive red phenotype (e/e) seem to have especially weak nose pigment.

So it’s perfectly normal for many dog breeds and varieties with a solid white, cream, yellow or red coat to have fading nose pigment that turns the dogs’ noses pink or pinkish-brown over time.

Recessive red stops a dog from producing eumelanin-pigmented hair and only allows the production of the white, yellow or red pigment type phaeomelanin.

But even a yellow Labrador or Golden Retriever should normally have some black on its nose since eumelanin is still the pigment type that is used to give color to his nose, skin, nails, paw pads, lips, eye rims or eyes.

Interestingly, dogs with a domino pattern also tend to have weak nose pigment and domino is also known to restrict eumelanin production in hair pigment cells.

Domino patterns often cause a pink stripe with crisp edges down the middle of the nose.

Domino nose is not the same as snow nose but can look very similar. Some of these dogs only have some fading pigment in the center of their nose. Dogs with ancient domino (eA)seem to be a little more prone to have pink on their nose than sighthounds with grizzle domino (eG).

Not every dog with domino shows this kind of nose coloration. And sometimes even dogs without domino have a very similar nose color pattern.

But from our current understanding, neither recessive red (e/e) nor domino (eA/-, eG/-) should affect the skin or nose color. Except, in many cases, they do!

But this kind of nose color change can also affect dogs with other coat color patterns. Dogs with a tan point pattern like Bernese Mountain Dogs, GSD or Australian Shepherds seem somewhat prone to nose color fading or weak pigment.

There seem to be different modes of progression. In some affected dogs the nose color change seems to be permanent.

In other cases, dogs lose most of their nose pigment during the winter months while some color returns during summer. This might have to do with the amount of sun exposure (dogs living in higher latitudes fade more easily, btw) but we really don’t know for sure.

Is a Dog’s Nose Turning Pink a Problem?

Your dog’s black nose is turning pink and maybe you are wondering if you should be concerned?

Of course, some changes in pigmentation, texture or moisture can be related to pathological problems, age, nutrition, allergies, etc.

But in the case of a snow nose on dogs, there is nothing to worry about! It’s a purely cosmetic color change that doesn’t affect a dog’s health in any way.

And if you are looking here for a snow nose treatment… there is none. We don’t even know what causes the changing color in some dogs’ noses.

Virtually every breed with a recessive red phenotype (e/e) will have some dogs with fading nose pigment. These are just some of the many dog breeds where pigment changes on some dog’s noses are to be expected:

How Can Breeders Avoid Snow Nose?

Fading nose pigment is a purely aesthetic issue associated with some coat color patterns. And there is not that much we can do about this kind of nose color change. Nonetheless, the breed standards for many affected breeds ignore this fact and call for a solid black nose.

Of course, this creates a problem for breeders that want to show their affected dogs at conformation events. In the past, some show dogs were even sometimes be said to have artificially dyed or tattooed noses (!)…

But it seems to be possible to breed away from this type of nose hypopigmentation, at least to some degree. It seems not totally impossible to achieve some good lasting pigment even in recessive red dogs (e/e), e.g. some show line Samoyeds or Westies.

There is some breeder lore on how to go about breeding dogs that don’t lose their nose color.