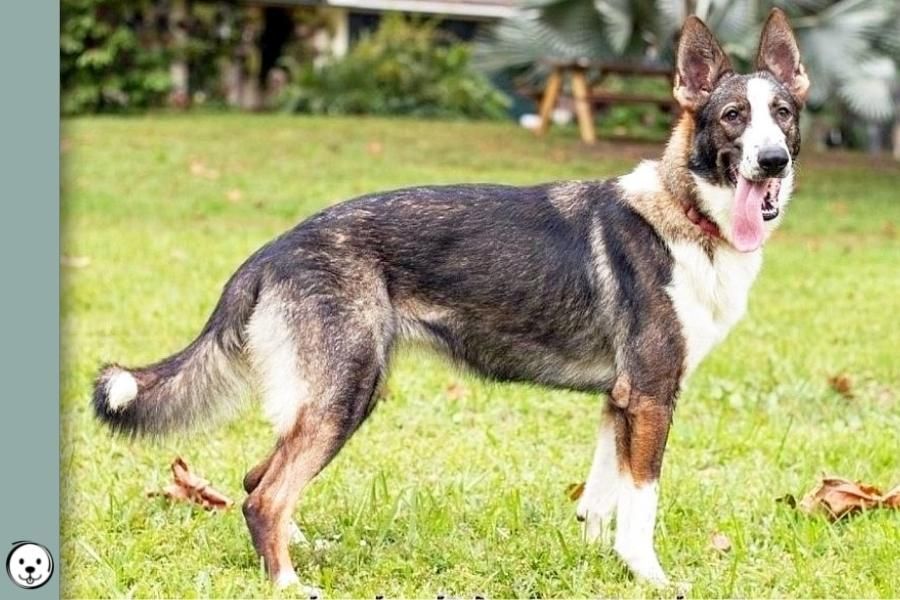 Panda German Shepherds have a white spotting pattern caused by a mutation in the KIT gene. Panda is expressed as mostlly symmetrical white markings on the head and body.

What is Panda Spotting?

German Shepherd Dogs traditionally don’t have white markings. Panda is considered a non-standard coloration and a fault for showing.

Panda markings are the result of a rather recent mutation in the KIT gene. Panda phenotypes range from small white markings on the head up to white areas on the body.

Panda often causes split faces or symmetrical white patches with somewhat irregular edges on the forehead, muzzle, chest, collar, belly and the tip of the tail. Usually, white facial markings are always present while the amount of white on the body varies from dog to dog.

These white patches cover whatever pattern a dog would have expressed at their position. And as any white spotting GSD with a panda pattern can develop ticking in their white markings.

Panda can resemble white markings from piebald, Irish spotting or whitehead. But Panda only occurs in German Shepherd Dogs, a breed that traditionally does not come with any of these white markings.

Panda white spotting pattern is caused by a restricted ability of pigment cell precursor cells to survive and migrate during early development.

But so far, no adverse health defects are associated with this pattern. GSD with Panda can have blue eyes and very rarely some pink on their noses. But they don’t seem to have the same pigment-related hearing impairment risk as dogs with other white spotting patterns.

Panda is a fairly new pattern that occurred in a litter born in October of 2000. This pattern was then propagated by private breeders interested in this new phenotype.

All Panda Shepherds can be traced back to a female GSD of purebred ancestry named Lewcinka’s Franka von Phenom. Franka was born to traditionally colored parents but expressed a white spotting pattern due to a spontaneous mutation in one of her sire’s reproductive cells[3].

Panda spotting is caused by a loss-of-function mutation in the KIT gene on dog chromosome 13[1].

KIT governs developmental processes important for the survival and migration of early pigment cells. KIT-related white spotting is caused by the absence of pigment cells in certain areas.

Mutations in the KIT gene cause white markings in a variety of other animals (cat, fox, pig, horse, cow, etc.) but had previously not been observed in dogs.

Interestingly, a similar de novo event was observed some years ago in a Weimaraner puppy that was born with a white spotting pattern in a litter of otherwise solid-colored siblings[4]. Since white coats in Weimaraners are seen as evidence of cross-breeding this pup was neutered.

Panda is an autosomal dominant trait, dogs need only one copy to express this pattern (P/p). In fact, it acts as early embryonic lethal in dogs with two copies (P/P). KIT is an essential gene that influences many different processes and a dog needs at least one normal copy to survive.

Every Panda Shepherd is heterozygous (P/p) but no homozygous dog with this pattern (P/P) has ever been found[2].

To produce a GSD with a panda phenotype at least one parent must be panda-colored (P/p) which gives each puppy a chance of 50 % to inherit the dominant P allele. But if two panda GSD are bred together there is a chance to produce homozygous (P/P) combinations in some offspring which may result in a reduced litter size.

Breeders should consider that White Shepherd Dogs can mask a panda phenotype since white markings are not visible on a dog with white phaeomelanin intensity!