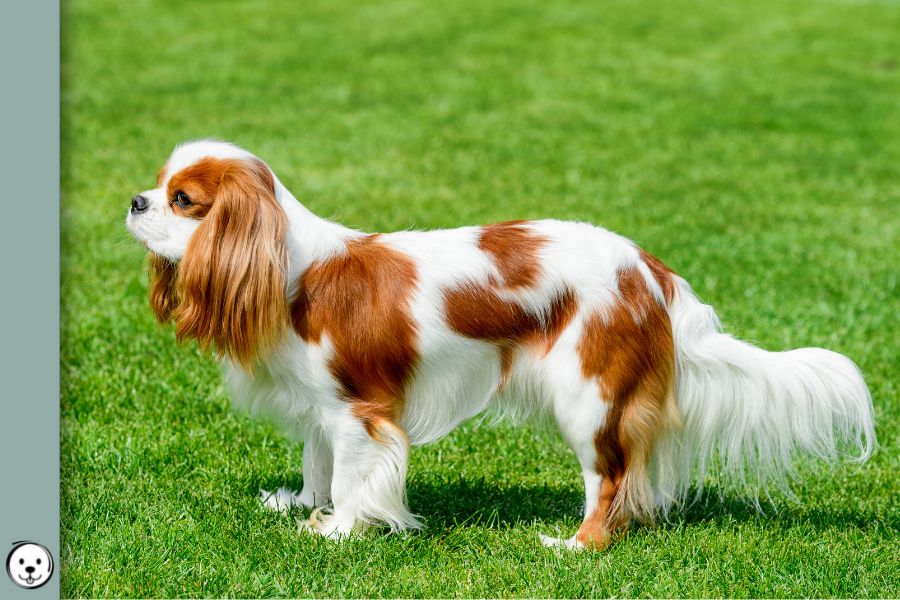 What is White Spotting?

White markings in a dog’s coat are caused by a lack of pigment cells in these areas. The dog can’t produce any pigment during hair growth and the hair in affected areas remains white.

The Spotting Locus has an influence on how far pigment cell precursors will migrate from the neural crest to cover the dog’s body during embryonic development.

The dog’s back and head are good at keeping pigment while more remote body areas like the tail, chest and feet are the first to lose their color.

So, white spotting follows a certain pattern, it does not add white in totally random spots. But it is also influenced by stochastic events which creates a whole range of possible outcomes.

The diversity of white spotting patterns causes phenotypes from minimal white markings to piebald patterns and can even produce a predominantly or completely white coat.

White spotting can occur “on top” of any pattern a dog would normally have expressed. A white coat inhibits the expression of any pigment pattern and can hide a dog’s true phenotype.

The Spotting-Locus was located at the MITF gene (Microphthalmia-Associated Transcription Factor) on dog chromosome 20. Among other things, MITF plays a role in the development, survival, and function of pigment cells.

Mutations at the Spotting-Locus affect the migration and survival of melanoblasts. This causes an absence of pigment cells in certain areas and creates tiny or extended white markings.

But further research is still needed to understand the mechanisms behind different versions of white spotting (and maybe make them testable).

The sp variant represents a short interspersed nucleotide element (SINE) which in many breeds is associated with piebald spotting[4]. At the moment sp is the only allele we can test for at the S-Locus. But in some dogs (e.g. northern breeds) testing for sp doesn’t work reliably.

Solid coat (S) seems to have incomplete dominant control over piebald (sp). This causes a dosage-dependent expression where dogs with one copy (S/sp) on average produce less white than homozygous dogs (sp/sp).

As a rule of thumb, one copy of piebald (S/sp) can cause very limited up to moderate white spotting while two copies (sp/sp) cause more white which can in some cases cover most of the dog[4].

But the interpretation of piebald test results is breed-specific. And selective breeding had an influence on the expression of piebald phenotypes in certain breeds.

In many dog breeds like Bull Terriers or Boxers, S/sp will be expressed as a mantle pattern (also called flashy, etc.) while two copies (sp/sp) result in a predominantly white coat. This can be very surprising for breeders that didn’t realize that their dogs were in fact white-factored (S/sp) and produce all-white puppies.

Dogo Argentinos, Australian Cattle Dogs, English Setters or Dalmatians only come in extreme white and almost all of them test as sp/sp.

But in other dog breeds, dogs with S/sp are almost solid or show a very minimal white pattern expression while only sp/sp produces some white spotting.

This simple tool can help you predict different S Locus combinations. Sure, we don’t know much about what controls the extent of white markings but it’s better than nothing:

Normally, the precursors of pigment cells migrate from the neural crest to certain areas called pigment centers during embryonic development.

These centers can be found at the base of the neck and tail, the top of the head or the ears. From there pigment cells follow certain paths to eventually cover the rest of a dog’s body.

White spotting happens if something interferes with the journey of young pigment cells. And the first areas to be affected are usually the last areas where pigment cells would have arrived.

This can create all kinds of looks from minor to extreme white spotting. There are many phenotypes in between that cause distinct looks, many of them favored in certain dog breeds.

Small white spots on the chest or white toes are called residual white. White areas are always biggest at birth and get smaller while the dog grows, so some thin white stripes on the chest often disappear.

This can happen on any dog and is oftentimes simply caused by a hiccup during pigment cell migration. Some dog breeds seem to have a predisposition for untestable minor white spotting. But overall residual white and very minor white spotting is not considered an inheritable trait.

True Irish Spotting is not testable and is not the same as piebald spotting, affected breeds may test as solid (S/S) at the S-Locus. But Irish spotting is very common in a variety of breeds.

It creates a symmetrical pattern that includes white on the chin, muzzle, chest, belly, collar, lower legs and tail tip. In general, an Irish spotting pattern doesn’t cause too much face white by itself and only creates a white snip or very thin blaze.

There are some breeds where at least some dogs have real Irish spotting.

Since many of these breeds also come with whitehead or piebald markings their pattern may not always be caused by Irish spotting alone.

White-factored Border Collies for example express normal Irish markings but can have additional white on their hind legs, back or tail caused by a piebald variant (S/sp) which extends beyond the Irish white.

White spotting usually starts to appear at the farthest areas from the neural crest. A more minimalistic expression can create a neat trim pattern with white only on the tip of the tail, the muzzle, paws or as a moderately sized chest patch.

If the white areas grow just a little bigger this can look very much like the untestable Irish pattern mentioned above. But many dog breeds that seem to have Irish spotting are in fact heterozygous piebald (S/sp).

This happens in Bull Terriers, Great Dane, Boxers or Frenchies. Oftentimes the white spotting in these breeds creates irregular patterns and will not look the same on every dog. Some breeds call pseudo-Irish markings a boston, irish pied, tuxedo, flashy or mantle pattern.

In a piebald pattern, the white of the collar, legs and tail begins to extend to the dog’s back. This can create very irregular and somewhat random patterns.

Some breeds call this piebald, pied or random white. Shar Peis call it flower, Huskies call it splash coat, Cavaliers call it blenheim and Poodles call it abstract or parti depending on the amount of white.

Piebald can create very random-looking patterns with fully pigmented patches on a white base.

On dogs with extended white spotting, the whole back can be white with pigment only being retained in the original pigment centers at the neck or the base of the tail.

And piebald can create many irregular and asymmetric patterns.

In some cases, dogs are born with no color left on the body and pigmented areas on their head only. These color-headed white dogs can have a wide blaze but the pigment around the ears is always there.

The head is usually the last area to lose pigment (this is what sets piebald apart from whitehead). A color-headed white pattern is found in many gundog breeds but also in terriers or toy and herding dogs.

Dog’s with extreme spotting are predominantly white but can still have some small patches of color on the back, the base of the tail, the ears or around the eyes. But when even the last bit of color on the head is missing a dog can get all white from extended piebald spotting.

White spotting is caused by a general problem of pigment cells to survive and migrate during development. This affects not only pigment cells in the hair follicle but also the pigment cells that should have ended up in the eyes, ear or skin.

Extended white spotting is often associated with blue eyes, pink patches on the skin and nose or congenital deafness.

A pattern not related to white spotting is caused by a theoretical whitehead variant at a not yet identified gene locus.

Whitehead causes the color in a dog’s coat to disappear from the face rearwards. This can create all kinds of patterns like split faces, white faces or hourglass blazes on an otherwise normally pigmented dog.

In more extreme cases, whitehead can extend beyond a dog’s neck and flanks and create a pattern very similar to piebald.

Irish spotting and whitehead are not testable at the moment.

But the piebald variant sp associated with white markings occurs in many, many different dog breeds. Here are some examples.

Other Reasons for Spotting

There are many white spotting patterns not testable at the moment. This includes Irish spotting and Whitehead phenotypes which might not even be caused by MITF mutations.

And there are other traits that can cause white areas in a dog’s coat even when no sp allele is present:

If a dog has a very low phaeomelanin intensity he will have a completely white coat. In this case the coat is in fact fully pigmented just with a very light version of phaeomelanin. This is the case in many all-white dogs like white Poodles, Samoyeds or Westies.

Interestingly, dogs with a white shade of phaeomelanin can still have white spotting, e.g. American Eskimo Dog or Bichon Frisé. But of course it’s nearly impossible to see cream-white patches on a white base color.

Domino patterns like ancient domino or grizzle in sighthounds tend to lighten phaeomelanin in any pattern. This can create some black-and-white phenotypes even if a dog actually had no or only minor white spotting.

Another trait creating very light phaeomelanin markings is the urajiro found in asian spitz-type breeds like Shiba or Akita. These breeds often express a version of countershading with very crips and very light markings on the belly, legs, chest, muzzle and eyebrows. But these markings are not really white but just a very light shade of yellow.

Harlequin Merle (Mh) has a tendency to extend existing white markings and has by itself the ability to delete pigment. In some cases, this produces white patches even without white spotting. And a double merle genotype often creates a very extensive lack of pigment.