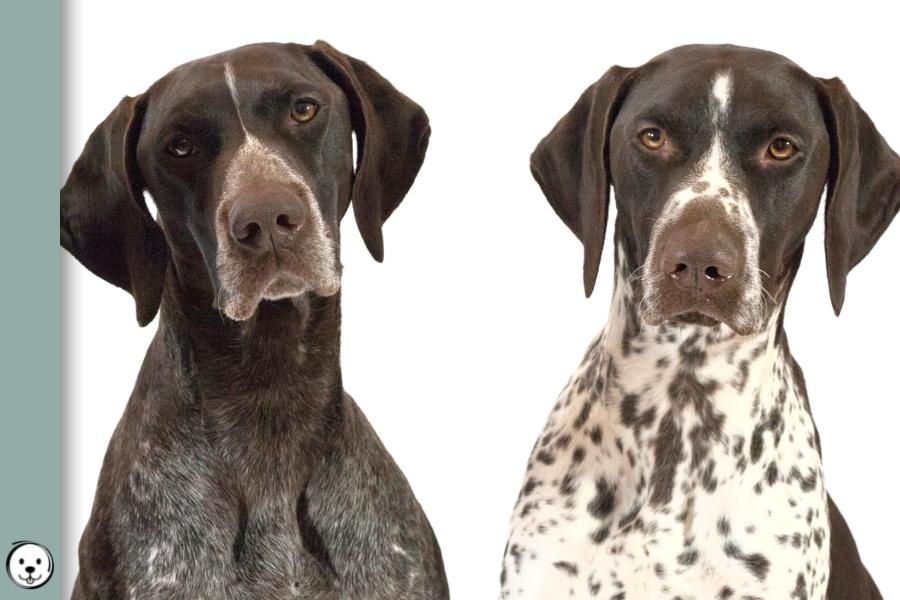 Ticking and roan cause spots or hairs with normal color to grow inside areas that were white at birth. A dog can only develop ticking or roan if it has some form of white spotting.

What are Ticking and Roan?

Ticking, roan and even Dalmatian spots create similar patterns but the mechanisms behind these phenotypes are not fully understood.

Each mottle, roan patch or Dalmatian fleck will always express the color the dog would have had in a normal pattern without white spotting.

So on a genetically solid brown dog all the ticking, flecking or roan inside white markings will also be solid brown.

Ticking modifies areas with white spotting and causes small pigmented spots to appear. But the amount and density of ticking vary between dogs.

Dogs with moderate ticking will have most of their spots on their legs and muzzle.

In dogs with heavy ticking, all areas with white coat can be ticked, mottled or speckled but will still be most dense on the muzzle and legs.

Roan causes pigmented hairs to grow in all areas with white spotting.

This mixture of pigmented and unpigmented hairs without the formation of distinct spots often gives a more evenly grizzled look compared to ticking. But roaning can also be patchy and look similar to very dense ticking[2].

Heavy roan can even cause so many colored hairs to grow inside white areas that a dog can almost look solid-colored with only some scattered white hairs. But again, dogs with a roan pattern are always born with clear white spotting.

Dalmatian flecking seems to be a modified version of roan. Dalmatian spots are larger, more round and more evenly distributed compared to a normal ticking pattern.

Ticking and roan patterns are similar but not the same. Some dogs even display some of both phenotypes at the same time (in ACD this is called a mottled coat).

Both the Ticking-Locus and the Roan-Locus are considered modifier loci that have the ability to change coat color inside white spotting patterns. Mutations associated with ticking and roan are likely located in different genomic regions near the usherin gene (USH2A) on dog chromosome 38[1,2].

But for now, we don’t know with certainty if ticking and roan work as completely separate traits controlled by separate loci. At least in spaniel breeds it seems more likely that different combinations of specific mutations on the same chromosome (so-called haplotypes) work as alleles that can result in a complex range of similar patterns[2].

At the moment our best guess is to assume that there are three major alleles (t clear, T ticked, and TR roan). But the interaction between these alleles is not fully predictable and there might be additional alleles or modifier genes.

Roan seems to behave co-dominant (TR/TR produces more roan than TR/t and mottled roan when TR/T) and ticking is dominant over clear coat (T/T and T/t produce ticking)[2]. But these alleles have only been studied in spaniel breeds and might not work the same in other breeds.

In other breeds like Border Collies, the common idea is that ticking might be incomplete dominant (T/T produces more ticking than T/t). But for now, we have to wait until there is a better explanation that works for all breeds.

The theoretical Flecking-Locus governs whatever mechanism causes the distinct phenotype seen in Dalmatian spotting. Remember, Dalmatians have their own version of large round spotting.

Flecking seems to be a recessive trait (F no flecking , f flecking) where only homozygous dogs (f/f) produce this distinct pattern[1]:

For a long time, the Dalmatian pattern was thought to be a modified version of ticking. But interestingly, all Dalmatians in fact carry the same mutation as dogs with roan (TR)[1].

So the Dalmatian’s flecking pattern might actually be a modified version of roan caused by an unknown modifier of spot size.

One candidate for the Flecking-Locus that could act as the Dalmatian’s spot modifier seems to be associated with a defect in urinary metabolism. High uric acid in Dalmatians was caused by a mutation in the SLC2A9 gene at the huu-Locus (hyperuricosurea) on dog chromosome 3.

This trait was probably fixed in Dalmatians by accident while selecting for their distinctive spotting pattern. In the end, Dalmatians were homozygous recessive for the spotting modifier at the F-Locus (f/f) but unfortunately also for high uric acid[1].

A backcross project with English Pointers produced Dalmatians with low uric acid (or LUA-Dalmatians) while preserving their distinct spotting pattern. So the mutation at the huu-Locus on chromosome 3 is just closely linked with flecking but not causal for Dalmatian dots.

All dogs with ticking or roan are born with clear white markings, these patterns start to emerge over the course of the first few weeks after birth. So of course, roan and ticking are not visible on any solid-colored area.

You first need some form of white spotting (Piebald, Whitehead, Irish spotting or Panda) that can act as a canvas for ticking or roan to appear. And even then they might not be very obvious if the white spotting is limited to very small areas.

By the way, ticking and roan will not be expressed on dogs that only appear to be white as a result of very diluted pheomelanin! That’s the reason why Westies, Maltese or White Shepherd Dogs never have ticking, they’re not really white!

The color of ticking or roan markings matches the color a dog would have expressed if it wasn’t for his white spotting.

So on a dog with a saddle or solid-and-tan pattern, the ticking or roan coloration will follow the color pattern hidden “underneath” the white patches.

Roan and ticking can affect dogs with any coat type. It simply becomes less recognizable in longer and even more so in curly coats.

By the way, it’s pretty common even for heavily mottled dogs to keep some solid white areas on the tail and even on the head or back. But we don’t know what causes these patches where some of the dots are missing.

Roan causes pigmented hairs to grow inside white spotting. A very dense roan pattern can create areas that will look almost as if the dog was solid or solid with white spots.

Different versions of roan are called speckled or mottled in Australian Cattle Dogs.

In many dog breeds black dogs with roan are called “blue” as in Blue Heeler, Bluetick Coonhound, blue roan in English Cocker Spaniels or Blue Gascony in a variety of hunting breeds from France.

These dogs are not really diluted black but get their blue-greyish looks from their roan pattern.

Ticking can be anything from minimal to very dense. Light ticking will first emerge around the muzzle and legs while heavy ticking can affect all white areas but usually still concentrates more around these areas.

Again, in some breeds black ticking is called blue as in blue belton in English Setters.

Dalmatian spots are a little larger than regular ticking but there still is some variation. Flecking can cause medium-sized or large spots and different dogs can have very many or very few spots.

Dog Breeds with Roan and Ticking

Not every dog breed with white spotting also has ticking or roan. There are many dogs with clear white markings like Shelties, Whippets, Boxers or Bull Terriers.

Of course, the Dalmatian is the only breed with their breed-specific flecking pattern. But ticking and roan occur in many different dog breeds. But remember, all of these patterns will only be expressed if a dog actually has white spotting.

So for example, some Belgian Tervuren, Vizsla or Weimaraners seem to have the genotype associated with roan. But since these breeds traditionally don’t have white markings it’s simply not visible[1].

Here are some of the dog breeds that at least occasionally produce dogs with roan or ticking:

Some phenotypes can look a little bit like ticking, e.g. harlequin in Great Danes or some merle patterns. Most often heavily ticked dogs are mistaken for merle or vice versa.

Some dogs with extended white spotting on the head can have some smaller colored dots on their ears that can look lick mottles. But unlike real ticking these pigmented patches were already present at birth and didn’t fill in later.

And agouti with white phaeomelanin as seen in pepper-and-salt Schnauzers as well as grey coat from greying or dilution might in some cases look like heavily “blue roaned” coat.

But again, these dogs are already born with their pattern while dogs with true roan are born with clear white coat.