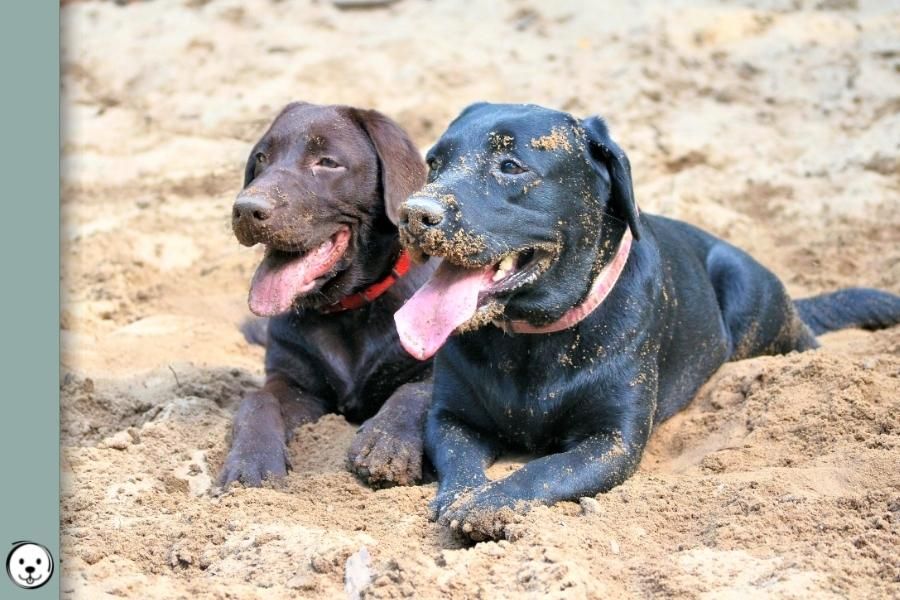 Want to know what to expect in your whelping box?

Here we take a look at the methods we can use to estimate which colors the puppies from a certain mating might have. A popular strategy is to use Punnett Squares as a simplified and easy tool to predict the likelihood of inheriting particular traits.

If you are familiar with the genetics basics you already know about genes and alleles. But let’s repeat some of the basics before we talk about the actual inheritance of coat color:

In body cells (also called somatic cells) a dog has a combination of two of the possible alleles at every gene locus. These can be identical or they can be different versions of the same gene.

These versions of one and the same gene are called alleles.

Example: At the B-Locus there are two alleles we call B and b. B is the dominant allele in this series: B > b. If a dog gets an identical allele from each parent (as in B/B or b/b) he is homozygous at this gene locus. If he has two different alleles (as in Bb) he is heterozygous.

Since B is dominant it will cause a black coat in a homozygous dominant (B/B) or heterozygous combination (B/b). But if no B is present and the dog is homozygous recessive (b/b) he will have a brown coat.

When breeding a dog he does not pass on both of his alleles to his offspring.

Each reproductive cell has a unique combination containing only one allele from each locus.

If parents are heterozygous at a certain locus they are able to offer different alleles.

And since each puppy has a 50 % chance to inherit either version this quickly creates a scenario with multiple possible combinations in the same litter:

Punnett Squares are a simple aid to visualize the outcome of certain pairings.

This simplified notation method was named after British geneticist Reginald Punnett and helps us work out the possible genotypes of the puppies in a litter quite easily.

To make full use of Punnett Squares we sooner or later need to know how to interpret the different genotypes. But for now, we’ll stay with our example from above and look at a B/b x B/b mating.

Btw, the order of letters doesn’t really matter (B/b = b/B). But usually, the dominant allele is mentioned in the first place.

What can Punnett Squares tell us?

If we list the possible combinations in a mating for each gene locus we learn two things:

A common mistake is to think we could determine the ratio of colors we would get in a litter.

But since every puppy is an independent random event (like throwing dice or tossing a coin several times in a row) we can only predict the color likelihood of individual puppies and not predict the color ratio for a whole litter.

The same goes for the gender of the puppies. We very well know that each puppy has a 50 % chance to be a boy or a girl. But it’s impossible to predict the ratio of boys to girls in an expected litter.

Btw, the different genes that produce all the canine coat colors are inherited entirely separate from each other. Every available allele has its own 50 % chance of being passed on. Meaning: If a dog inherits allele B does not influence what allele he inherits on other loci.

How will my Puppies look?

Punnett Squares help us determine how likely the offspring of two parents will inherit a certain genotype.

To calculate the likelihood that a puppy will have a certain allele combination we just have to count how often this combination appears in our table cells:

Punnett Squares also work to illustrate the probabilities of inheritance for more than one gene at the same time. We just have to list every possible pairing of alleles each parent could offer.

In this example, we looked at the B-locus and D-locus that together determine the color of Eumelanin a dog can produce. There are four possible phenotypes:

You can look at even more traits at the same time. But this is rarely needed and is not really advisable since this can get somewhat tedious. If you want to play around there are some Punnett Square Calculators available online.

If you want to learn more about Punnett Squares you can watch this video on how to use them or have a look at this illustrated case study.