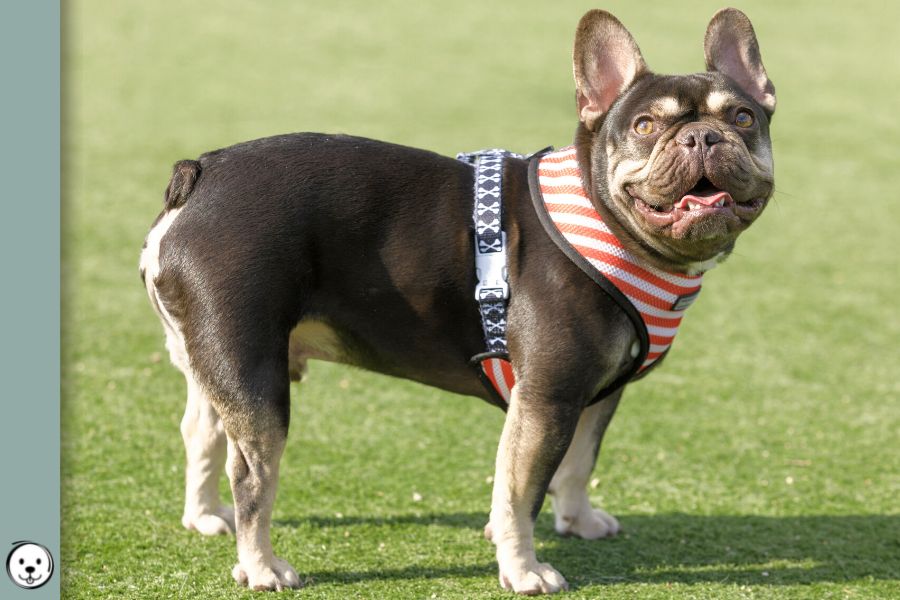 French Bulldog cocoa gives a dark brown coat color that is caused by variation in a different gene than the usual chocolate brown coat found in other dog breeds. Cocoa changes the color of a dogs eumelanin and can occur in a variety of different color patterns.

A b/b genotype at the B-Locus is responsible for liver color in a variety of dogs like chocolate Labradors. But cocoa French Bulldogs express a dark brown eumelanin pigment color in their coat, skin and nose but do not have any of the known variants at the B-Locus.

Cocoa is a brown coat color that is slightly darker than regular chocolate brown in adult dogs. But differences between chocolate (b/b) and cocoa (co/co) may be subtle.

Cocoa tends to darken over time and cocoa Frenchie puppies are often born with a lighter greyish-brown coat. Puppy eyes are green or bluish and turn to green amber eyes in adults.

Before testing was available this color was called untestable brown or non-testable chocolate. For now, this coat color is only known to happen in French Bulldogs but may occur in other breeds.

Cocoa in French Bulldogs is caused by a mutation in the HPS3 gene (Hermansky-Pudlak syndrome 3) on dog chromosome 23. Frenchie Breeders sometimes call it the cocoa gene.

This gene plays a role in the normal maturation and transport of pigment organelles called melanosomes. Without a fully operational HPS3 a dog will produce a cocoa coat color in all eumelanin-pigmented areas and also in his nose and skin pigment.

The exact mechanism behind a cocoa coat color is not yet identified.

Possible causes are a decreased proportion of mature melanosomes and/or problems with eumelanin production in affected dogs. But eumelanin synthesis may be only partially blocked giving a darker phenotype compared to a chocolate coat color in other dogs[1].

Cocoa is a autosomal recessive trait, a dog must have two copies (co/co) to express this phenotype. Carriers (Co/co) or homozygous dominant dogs (Co/Co) will not express a cocoa coat color:

It is not always possible to reliably distinguish a phenotypically liver (b/b) from a cocoa (co/co) dog.

The interaction between the B-Locus and the Co-Locus is not fully understood. Both traits are inherited separately from each other and a dog with B/b Co/co will carry both traits but not express brown pigment.

However, a dog with cocoa can also be liver at the same time. Dogs with two copies of cocoa and two copies of brown (co/co b/b) express a coat color being much closer to liver brown than cocoa.

Liver having a more prominent effect on the coat color than cocoa if both are present indicates epistasis of b/b over co/co[2].

This simple tool can help you predict different Cocoa-Locus combinations:

Mutations in HPS3 in humans and mice are associated with a pleiotropic effect and cause a mild form of oculocutaneous albinism, abnormal eye pigmentation, vision impairment, uncontrolled eye movement or prolonged bleeding time[1].

A homozygous cocoa genotype co/co in dogs seems to have an influence on platelet dense granule abundance. However, no bleeding tendencies or major health problems associated with the cocoa coat color were reported so far[2].

Further research will show if a co/co genotype may cause any pathological phenotypes. This includes other clinically relevant symptoms or subtle effects on visual acuity that may have been overlooked by owners[2].

Usually, a dog’s coloring is lighter at birth and darkens to a richer color as a dog ages. But cocoa can have different shades from light cocoa to dark cocoa even in adult dogs[2].

Cocoa just alters the shade of eumelanin a dog can produce. Cocoa-colored eumelanin can occur in a variety of different patterns.

Piebald spotting can hide some of the coat pattern a French Bulldog would normally express. Of course, on an all-white dog, the cocoa color will not be visible because of the general lack of pigment.

In the color-bred Frenchie community, there are all kinds of terms that describe different color combinations. But these lightened shades of brown or cocoa can be very hard to distinguish from one another without testing the dog.

Cocoa will turn all eumelanin to dark brown and gives a dark brown nose. But since cocoa oftentimes is way darker than regular chocolate brown the effect on the nose pigment can be very hard to spot.

On a clear sable Frenchie cocoa can only alter the pigment of the nose (and the melanistic mask if present). In a brindle pattern it only affects the dark stripes.

A cocoa and tan French Bulldog will have a traditional tan point pattern with all the eumelanin on the dogs back turned to cocoa.

The same goes for a cocoa-tricolor French Bulldog which will also have white markings.