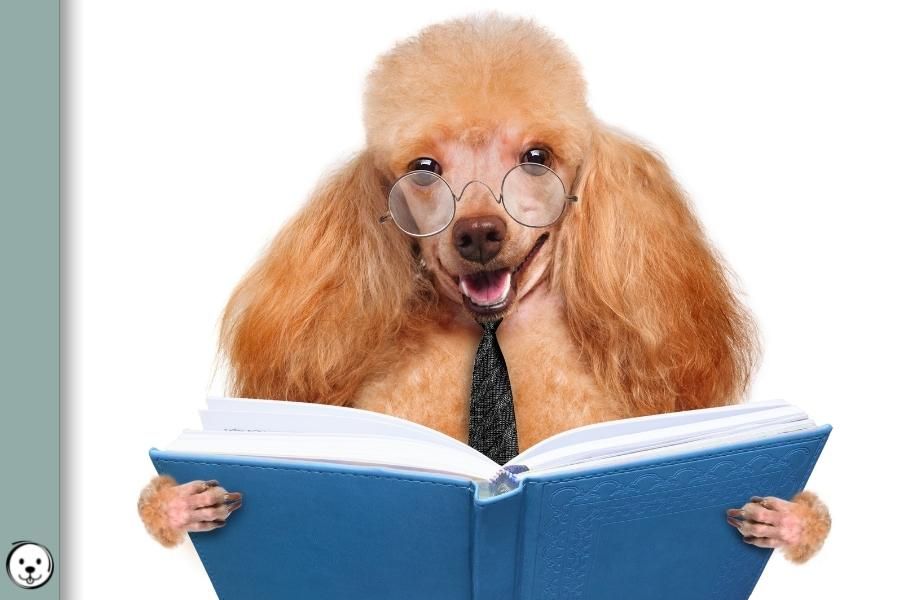 All the different aspects of a dog’s coat like texture, length, color or pattern are controlled by a handful of genes, their variations and their mode of inheritance.

If you want to learn more about dog coat color genetics now is the time to freshen up some of the basics before we dive deeper into the inheritance of coat colors in dogs.

Think of DNA as the instructional manual of your dog.

A single gene is a small unit of DNA that contains the information a cell needs to build a specific protein. The entirety of building plans in a dog’s DNA is called its genome.

But quite obviously not all dogs share the same building plans. One of the reasons is that there are different versions available for many genes. These gene variants are called alleles.

Some genes have a variety of different versions while others only have one or two possible versions present in the dog population.

Alleles are the result of mutations in a gene.

Not all mutations in a gene cause a visible change of phenotypic expression, many mutations are neutral or cannot be detected from the outside. But if we look at coat color genes we are obviously interested in mutations that actually change how our dogs look.

Example: Every dog has a Merle gene in its DNA, but not every dog has one of the mutated versions or alleles that causes the actual Merle coat pattern.

Genes come in pairs, one copy inherited from the dog’s father and one from its mother.

So if we look at a specific gene we find a set of two alleles, one inherited from each parent. And when we talk about genes and their alleles we use a letter code to simplify things a little.

Different genes and their alleles get assigned a unique letter.

Example: The ASIP gene contains the plan to build Agouti-signaling protein. But this gene is simply called Agouti Locus or even shorter A-Locus.

Every newly found allele that behaves in a new way gets assigned its genes letter and maybe some superscripted descriptive letters or symbols.

Example: At the K-Locus we find alleles like KBlack, kbrindle and kyellow that we simply call KB, kbr and ky.

The list of all the possible alleles on a specific locus is called it’s allelic series.

The original gene variant as it typically occurs in nature is dubbed the wild type. Alleles of a gene are derived from the wild type through genetic mutation.

Here you find a summary of all the color genes in dogs.

Sooner or later you’ll want to learn all these letters and terms to understand the big picture of coat color genetics. But don’t worry, we’ll walk you through it.

The DNA in every cell is split into different DNA molecules called chromosomes. Humans have 46 chromosomes, dogs have 78 chromosomes. You can read more about canine genetics here.

A gene locus (plural loci) technically means the actual physical location of a specific gene in a dog’s genome (locus is the Latin word for “place”). But the terms gene and locus can be used interchangeably when discussing a dog’s coat color.

Example: You can find the Agouti gene at the Agouti-Locus or short A-Locus on dog chromosome 24. Every dog has two of the 6 possible versions of this gene (Ay, Ays, aw, asa, at and a).

Different dog breeds act as separate sub-populations within all dogs. Purebred dogs are often limited to only some of all possible coat colors and display a relatively high grade of homozygousity.

Example: We know that all Rottweilers are short-haired and black & tan due to selective breeding for this coat and pattern. So basically all Rottweilers are homozygous for smooth coat (L/L), black eumelanin (B/B) and a tan point pattern (at/at). Alleles for other coat types, colors or patterns only occur at a very low frequency or have disappeared from the Rottweiler gene pool.

The genotype is the representation of an organism’s actual collection of genes and alleles. We use a standardized letter code and universally accepted genetic terms to describe coat colors as precisely as possible.

If we talk about a dog’s genotype we list the gene loci and alleles. If you know the different color genes in dogs you can often predict how a dog looks simply by knowing its genotype.

Example: A dog with the genotype of ky/ky E/e at/at b/b is rather likely a brown dog with a sharply defined and symmetrical tan point pattern like a brown-and-tan Dobermann.

The expression of genes of a dog’s genotype leads to its visible phenotype.

If we talk about the phenotype we discuss what we see as best as we can. The breed standards of different dogs list the desired coat colors for a specific breed in a descriptive manner.

The problem is that phenotypical descriptions often use made-up terms and are not very specific. Additionally, different breeds often use their own terms to describe different coat colors.

Be aware of the information gap when discussing a dog’s genotype vs. its phenotype.

Example: If someone simply tells you their dog is “brown” or “red“, it could be liver-colored with or without tan markings or maybe sable with or without dark shading or even recessive red.

Many of the color alleles we discuss on this site follow a path of complete dominance: If one dominant allele is present it will completely mask the presence of a recessive allele.

Example: On the B-Locus there are only two possible alleles (B and b) so a dog could be either B/B, B/b or b/b. B represents the wild type allele and holds the information a dog needs to build black pigment. The mutated version b lost this information and causes brown pigment if there is no B present.

Recessive traits can skip generations and will only be expressedd if they are inherited from both parents.

In some cases, a heterozygous condition on a specific gene locus can lead to a blend of both traits or an intermediate effect in the phenotype. We call this incomplete dominance or partial dominance.

Here none of the alleles can fully mask the effect of the other allele. Instead of acting completely dominant or recessive the interaction between two different alleles leads to a dosage-dependent effect and causes visibly less intense expression of a certain trait in heterozygous dogs.

Example: On the S-Locus there are two possible alleles (S and sp) so a dog could be either S/S, S/sp or sp/sp. S represents the wild type allele and leads to a fully pigmented coat. The mutated version sp causes white spotting.

Dogs with S/S are usually fully colored without much white. But homozygous dogs (sp/sp) have on average more white piebald spotting than heterozygous dogs (S/sp).

Other examples of color genes that act incompletely dominant are Merle or possibly Ticking.

This mode of inheritance usually allows for a wide range of possible outcomes. The impact of a single dose of a certain trait in a heterozygous dog can have a minimal or huge effect on the phenotype.

If both alleles of a heterozygous genotype are equally visible and don’t mix to create an intermediate phenotype we speak of true codominance. Both alleles are expressed independently in the phenotype.

One example of this is the AB Blood Type where both A and B proteins are expressed at the same time.

But there are hardly any codominant traits regarding coats and color. So we can skip this for now.

Not only single alleles on a certain locus can interact with each other. Some genes can mask or interfere with the expression of other genes at other loci.

Epistatic interactions can also work on a scale from mild interaction to fully repressing the effect of another gene on the phenotype.

Example: Even if a dog has the genotype for tan points (at/at) at his A-locus this pattern will not be expressed if he also has a KB allele at the K-locus. The K-locus acts epistatic to the A-locus as part of the pigment type switch system.

If a gene has an effect on the type or level of the phenotypic expression of another gene we call it a modifier gene. This could be interpreted as a form of epistatic interaction.

Example: The density of a brindle pattern ranges from very minimal striping to very dense striping. Unknown modifiers could explain this range of pattern expression.

Example: In dogs with the seal phenotype the effect of dominant black is mitigated and at least some of the pattern at the A-locus becomes visible. This could be due to a yet unknown modifier.

Example: Domino modifies the phenotypic expression of other colors and patterns in a dog’s coat, e.g. it can cause lighter phaeomelanin and influence markings and coat banding.

If you want to learn more there are plenty of great resources available for free! I recommend you can start here: