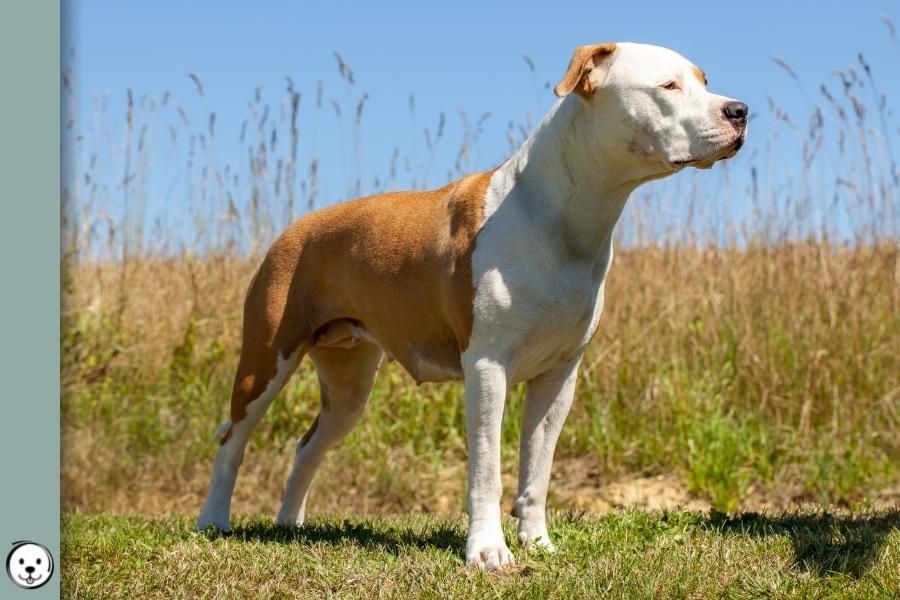 Whitehead describes a phenotype that creates white areas on the face and body. Unlike piebald spotting, whitehead causes white markings to appear from the head rearwards.

Whitehead causes white markings on the face, often with white over both eyes. But extended forms of whitehead can also cover part of the pigment pattern on the rest of a dog’s body.

In some of the dogs with a whitehead pattern, the white markings grow big enough to not only cover the face but also the neck, chest and front legs.

White can even extend beyond the withers and can cause white on the belly, flanks, back or loins until at least the front half of the dog is predominantly white.

All in all, whitehead can cause many different phenotypes:

The genetics behind a whitehead phenotype have not been identified yet (head over to the canine whitehead research website or GoFundMe to learn more).

We can’t explain the exact mechanism causing the whitehead phenotype. But we do know that it works separately from the piebald phenotypes found in many different breeds.

Whitehead can be hard to distinguish from other patterns like irish spotting or piebald. And even some merle phenotypes can contribute to white spotting.

And of course, dogs with whitehead can also be merle, piebald or irish spotted at the same time which makes it virtually impossible to attribute white markings to one cause or the other.

How does Whitehead look?

Whitehead creates many patterns that are considered as mismarks.

Whitehead markings are associated with an extended amount of face white. But some whitehead phenotypes are more subtle than others:

High amounts of head white can sometimes cause blue eyes, pink skin and nose spots. The lack of pigment can alsoincrease the risk for a puppy to suffer from congenital deafness.

Areas that keep pigment the best are usually found around so-called pigment centers. During embryonic development, the body sends the precursors of pigment cells from the neural crest to these pigment centers from where they spread to the rest of the body.

The pigment centers on the head seem to be located at the eyes, ears and forehead. Whitehead seems to be able to partially or fully shut down the ability of the pigment cells to migrate to their designated locations. Sometimes you can see which pigment center lost some of its function and which didn’t.

More subtle expressions of whitehead are easily missed but mating two affected dogs can result in puppies with a surprisingly high amount of white.

Whitehead is an inheritable trait that seems to work in an incomplete dominant manner. But its expression certainly has some stochastic components.

Whitehead patterns are found in many dog breeds from different breed groups[1]. In some of these breeds, whitehead is very common, in others it happens very rarely.

Since many of the affected breeds also very often come with Irish spotting, piebald or merle some additional smaller white markings on the muzzle or forehead from whitehead don’t stand out that much.

Whitehead occurs in very many herding breeds. About every Australian Shepherd seems to have this traita and the white front half in Old English Sheepdogs is one of the breed’s hallmark traits.

Whitehead in Mastiffs and Mountain Dogs

In mountain dog breeds a whitehead pattern can create obvious mismarks with too much white on the head:

Many of the non-solid terrier and bull-type terrier breeds with extended white markings and only very little color on the head. This can make patterns caused by whitehead harder to spot.

Whitehead happens very frequently in a variety of bully breeds:

Even some old or even primitive dog breeds can sport a whitehead pattern:

Some hunting breeds from very different breed backgrounds can have a whitehead phenotype:

These are the smaller fluffy toy breeds with the occasional whitehead pattern:

In sighthounds a whitehead phenotype can look very peculiar: