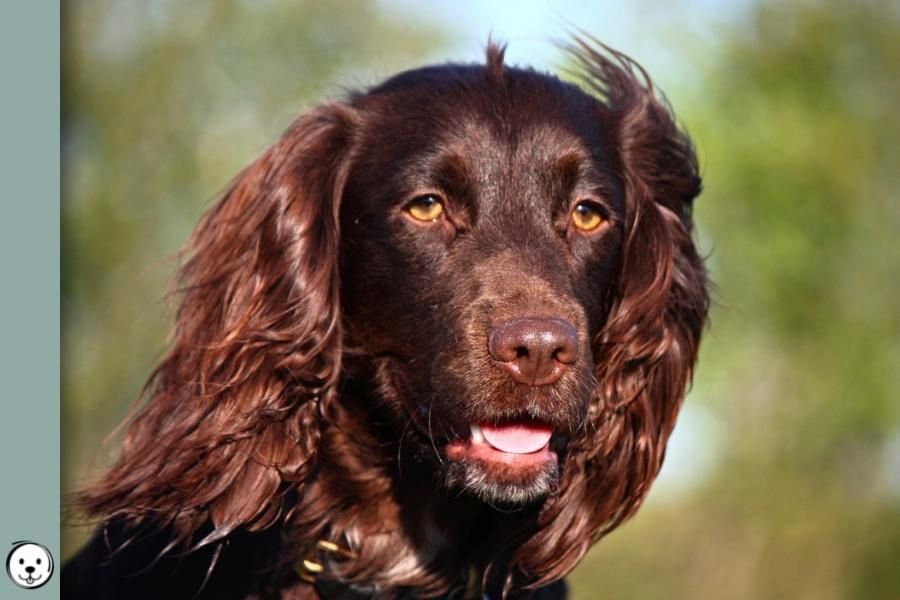 Dogs that are homozygous recessive at the B-Locus (b/b) will express brown instead of black pigment. This affects all the eumelanin in a dog’s coat as well as the color of skin spots, nose, footpads, lips, eye rims or nails which will be brown (liver, chocolate).

What is Brown Coat Color?

When we look at the genetics of different coat colors it’s important to use a terminology everyone can agree on. The term “brown” describes eumelanin that is expressed as liver or chocolate as seen in chocolate Labrador Retrievers.

In some breeds like Australian Shepherds or Border Collies, brown is called “red” (e.g. red-tri, red merle, etc.). But like many traditional descriptive terms, this has nothing to do with the truly red pigment phaeomelanin.

Learn more about pigment types in your dog’s coat.

The B-Locus only affects eumelanin. If a dog is b/b at the B-Locus all of the black pigment found in a particular coat color pattern will be turned to brown. A dog that really is brown will not have any black anywhere in its coat or on its body.

Brown pigment is found in phenotypes like liver-and-tan, chocolate merle and many more. And: The liver gene will also turn all of the pigment in the nose and skin to brown.

Brown is caused by a loss-of-function mutation in the TYRP1 gene (Tyrosinase Related Protein 1) on dog chromosome 11. This mutation interferes with normal eumelanin production.

TYRP1 plays an important role in eumelanin biosynthesis and the maintenance of melanosomes. Melanosomes are large organelles inside pigment cells where pigment is produced, stored and transported into the growing hair.

Without TYRP1 a dog can’t produce black eumelanin pigment molecules. When regular eumelanin production is disrupted the next best pigment a dog’s cells can produce without TYRP1 is brown. This alternative pigment structure reflects light in a different way and looks brown to our eyes. So technically, liver is not a dilution but a modification of eumelanin.

We don’t know all of the mutations that can cause liver pigment. But we currently do know of six different mutations that can break TYRP1 which we call ba, bc, bd, bs, be and bh. The difference between these variants is simply at which exact location in the B gene the building plan is broken.

The wild type B allele is dominant over any recessive b allele:

When will a dog be brown?

Brown coat is an autosomal recessive trait and will only be visible if a puppy inherited b from both parents.

All of the b variants will produce a brown-pigmented phenotype when a dog s homozygous recessive, eg. ba/bc or bd/bs or bd/bd.

From a functional standpoint, every b allele is recessive to the wild type B allele.

To have areas with a brown color a dog must be able to express eumelanin in his coat.

So he can’t be recessive red (dogs that can only produce phaeomelanin) or have extreme white spotting which can hide all the color in a dog’s coat.

But even then we can see if a dog produces brown eumelanin by looking at his nose and footpads where eumelanin is in many cases visible.

This simple tool can help you predict different B Locus combinations:

Brown coat can have different shades from light brown to dark chocolate. The shade of brown on a dog often seems to get lighter with age and sun bleaching can make a chocolate coat look almost orange.

Liver does not affect phaeomelanin but will turn any black pigment in a given pattern into brown pigment. This does not only apply to solid-colored coats but also to a variety of patterns:

There are many dog breeds or varieties that can have a solid liver-colored coat, e.g. Labrador Retrievers, Newfoundlands, German Shorthaired Pointer, Cocker Spaniels or Poodles.

When a dog is brown this also affects the color of his nose, lips, eye rims, skin, footpads and nails. All brown-pigmented dogs will have only brown in their skin pigment.

Usually, brown-pigmented dogs will also have a lighter eye color compared to black-pigmented dogs. Most often they have amber eyes that will be green-yellowish in puppies.

If a dog has extreme white spotting or can only produce yellow pigment (clear sable, recessive red) there won’t be any brown hair in his coat. But he will still have a brown nose and on average lighter eyes.

And even white Poodles or Labrador Retrievers can come in yellow with a brown nose (although most breed clubs consider these non-standard colorations).

White spotting can hide some of a dog’s original coat color. Some brown-white dog breeds even have ticking or roan which subsequently can fill in some of the missing color.

Merle deletes some eumelanin and creates a marbled pattern with patches of varying pigment shades. It does not affect phaeomelanin, e.g. in a liver merle-and-tan or liver merle-tricolor pattern the tan points will keep their original color.

Some breeds call a combination of merle and liver a “red merle” although the dogs aren’t really red but actually brown.

Dogs with a tan point pattern have a eumelanin-pigmented base color and lighter phaeomelanin markings. In brown dogs, the base color will be turned to liver while the tan markings are not affected.

Dogs with tan points and white are commonly called tricolor as in chocolate-tricolor or brown-tri-color (and sometimes even “red”-tricolor).

In dogs with a saddle pattern the saddle will be brown. These dogs will be born with a tan point pattern, the tan markings just grow til there is only some eumelanin left on the back.

A clear sable usually has not enough eumelanin to see brown pigment, especially against a yellow or red base.

But in a heavily tipped sable or shaded sable coat you might be able to detect brown hair tips.

Agouti causes hair on a dog’s back to be banded by alternating between lighter and darker pigment during hair growth.

Liver Agouti is not a common combination but can be found in some liver-colored German Shepherd Dogs or Siberian Huskies.

Brindle causes stripes of eumelanin on any phaeomelanin-pigmented areas in a dog’s pattern. If a dog is brown all his brindle striping will turn brown.

Melanistic Masks add some eumelanin on a dog’s muzzle. Of course, if a dog produces liver-colored pigment this mask will also be brown.

Color dilution at the D-Locus can turn brown to isabella (or: lilac). Diluted brown usually looks like a silvery mousy-brownish color.

Isabella occurs in some breeds but is all in all quite rare. And it is the only acceptable color for Weimaraner or Slovak Rough-haired Pointer which are all b/b d/d.

In some longhaired, wirecoated or curly breeds the brown pigment fades to a beige color. Typical breeds with brown and progressive greying are Poodles, Lagotto Romagnolo or Spanish Water Dogs.

Domino restricts eumelanin production and so can reduce brown pigment in any pattern.

This can be observed in some northern breeds that also come in brown, e.g. Siberian Huskies and Alaskan Malamutes which are either liver agouti domino or tan point domino.

Not every dog that looks brownish really produces brown eumelanin.

Brown is very common in an accepted color in very many dog breeds. But it is not present in many older breeds like some asian spitz-type dogs as well as in many mastiffs or sighthounds.

Here are some examples of dog breeds with brown pigment:

When choosing a company to test a dog’s B Locus you should keep in mind that there are different b variants and not every company tests for all of them.

As said above, a dog will express brown eumelanin whenever he inherited a b allele from both parents and has a b/b genotype. It doesn’t matter which combination of b alleles he has (e.g. bs/bd)

However, some of the mutations causing b can be found inside the same gene. So there are some combi genoytpes like bc+d where the TYRP1 gene is broken in more than one spot at the same time. This can be a source for confusing reports when testing your dog.

Tests scan for the known mutations at the B Locus and will report any of them as b. But what if a dog actually is B/bc+d? In this case, he technically still is B/b since he has one normal wild type building plan and will produce black pigment. But since tests will find two of the b mutations they are looking for (bc+bd) they will report such a dog as b/b!