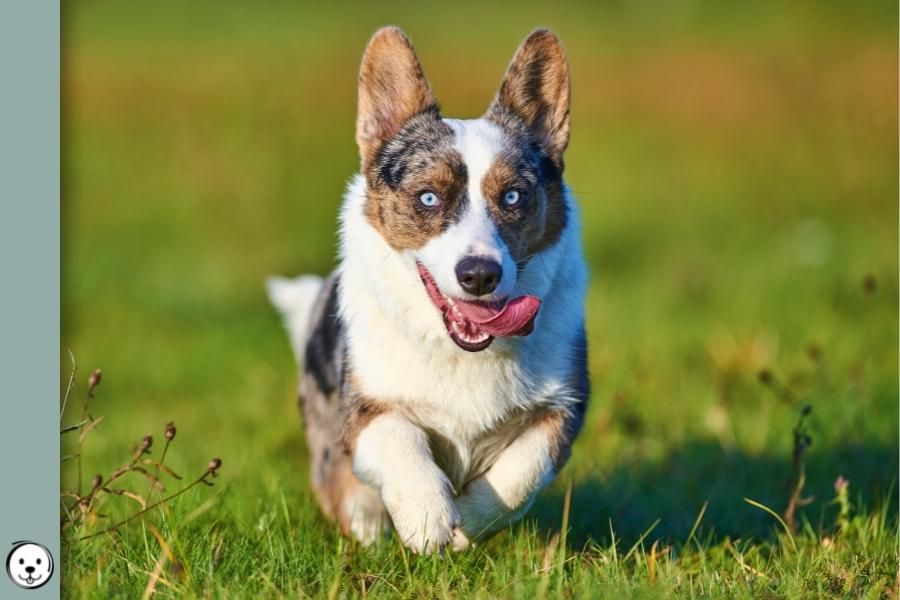 Why Are Some Dog’s Eyes Blue?

The eye colors in dogs range from dark brown to amber up to green and blue. Brown and yellow shades are caused by the pigment eumelanin in the dog’s iris. Eumelanin is a black pigment but some dogs only can make brown eumelanin or diluted colors causing different eye colors from brown to yellowish.

The darker the eumelanin and the more densely it is distributed the darker the eye looks. Eye colors from dark brown, brown, light brown or amber to yellow are variations of pigment colors.

But what happens when there is less iris pigment than expected?

Well, a slight lack of pigment causes the eyes to become greenish-yellow or green often seen in dogs with color dilution. And a complete absence of pigment makes them look blue. These light eye colors are called structural colors.

Dogs don’t have green or blue pigment. These eye colors are caused by an optical illusion when light bounces off the tissue structures in the iris instead of being absorbed by pigment granules.

So, blue eyes are a structural color caused by a lack of any pigment in the iris.

But what causes the loss of iris pigment in some dogs?

Basically, any trait that can interfere with the function of pigment cells or pigment distribution in the eye can cause blue eyes. We currently know of four ways for a dog to have blue eyes:

As you can see there are some different mechanisms behind blue eyes in dogs. Causes are often associated with a lack of pigment in a dog’s coat color pattern but canine blue eyes can also happen on their own. Affected dogs can have solid blue eyes or partially blue eyes.

Aside from albinism, it’s hard to predict if a dog will have blue eyes and if he will have solid blue eyes or partially blue eyes Not every dog with white spotting, merle or the blue eye trait will automatically have a blue eye. There are plenty of dogs with these patterns that have perfectly normal brown eyes.

If a dog will have blue eyes is just more likely when he has at least one of these traits but it is not a given thing. So the genetics of blue eyes in dogs are not as “straightforward” as coat color genetics.

And of course, there might even be some other traits affecting eye color we don’t know of yet.

If you spot a grey dog with blue eyes and a blotty greyish coat he is most likely merle.

Merle creates splotches of dark and light coat by removing some of the eumelanin in a given pattern. It depends on the combination of merle alleles how merle will look on a particular dog. Merle is a highly interesting topic with many different aspects to it, so we wrote a separate post about merle patterns.

Classical merle creates the marbled coat pattern commonly found in typical Australian Shepherds or Border Collies by diluting some of the black or brown pigment in random areas.

Atypical merle creates a more even and washed-out pattern. And harlequin merle or tweed patterns with large dilute spots or white spots are often found in herding breeds or color-bred bully breeds.

Blue-eyed merle dogs are very common. The stronger the merle effect the more likely it happens. And even the most common variant for classical merle can cause blue eyes. Additionally, merle can give solid blue eyes but can also cause especially eye-catching complete or sectoral heterochromia.

Merle only affects the black or brown pigment type eumelanin.

It has no effect on red, yellow, cream or white coats found in dogs with a recessive red or clear sable coat. But even then merle can still give blue eyes because eyes always get their color from eumelanin. It’s often one of the only signs that such a dog is in fact a hidden merle.

Unfortunately, if two of the longer merle alleles are combined (e.g. M/M) this can have a too strong effect and is associated with a too extensive pigment deletion commonly called double merle.

Striking pale blue eyes are very common in Huskies and related sled dogs. And non-merle Australian Shepherds were also known to occasionally have blue eyes without a known cause.

It’s not very common to see a brown or black dog with blue eyes. And since these dogs didn’t have any of the color patterns like merle or extended white spotting commonly associated with blue eyes so the reason for their eye color was unknown.

2018 a study reported having found a mutation on chromosome 18 associated with this trait[1,2]. Dogs that have a duplication of a small region of DNA near the ALX4 gene are very likely to have blue eyes.

ALX4 plays a role in role in mammalian eye development but we don’t yet understand how the blue eye trait found in Siberian Huskies and Australian Shepherds results in blue eye color.

The gene variant of ALX4 has an incomplete dominant mode of inheritance and is highly but not completely penetrant. This means that two copies of this mutation are much more likely to cause blue eyes than one copy. But in both cases, it sometimes doesn’t affect eye color at all.

Blue eyes from ALX4 are sometimes called Blue Eye Trait but since it’s so prevalent in Huskies it’s often called Husky Blue Eyes. Dogs with this trait most often have one or two solid blue eyes but sectoral heterochromia can also happen.

White markings in a dog’s coat happen when pigment cell precursors fail to migrate from the neural crest during embryonic development. And if there is a problem with pigment cell migration to a dog’s head this can also affect the types of pigment cells that should have ended up in his eyes or ears.

Blue eyes due to white on the head are often solid blue in color. In other words: It’s very rare to spot a dog with sectoral heterochromia that got it’s blue eye(s) purely from white spotting. But it can happen.

A higher amount of white coat on a dog’s head is associated with an increased risk for congenital deafness and a higher chance to have one or two blue eyes. But not every type of white spotting causes extended head white.

In fact, with normal piebald spotting the pigment on the head usually is the last to go. This is why you see so many dogs with white coat that still have big color patches on their eyes and ears.

But extended white spotting can cause a dog to be predominantly or even completely white. And extreme spotting with too much white on the head slightly increases the chance of a dog also being unilaterally or bilaterally deaf or having one or two blue eyes or pink skin or eye rims.

This is the common color pattern in many Dalmatians, Australian Cattle Dogs, white Bull Terriers, Dogo Argentino or English Setters. Some of these dog breeds are born with a solid white coat but later get some color back due to ticking or roan.

Breeders try to avoid blue eyes (and of course deafness) with varying degrees of success. Affected breeds often still occasionally produce blue-eyed or deaf puppies. Basically, you sometimes can’t have one (a solid white dog) without the other (lack of pigment elsewhere).

Another trait that can cause white markings and blue eyes is whitehead (untestable at the moment).

This type of white spotting works similarly to piebald but affects the pigmentation on a dog’s head first and other parts only if it’s very strong.

Unlike piebald, this can cause a dog to be solid-colored but have a white head. Whitehead is found in many different breeds but is particularly common in herding dogs, terriers or bully breeds.

Panda is a comparatively rare breed-specific mutation found in a line of German Shepherd Dogs. Panda can cause split faces or white patches on a dog’s head and can also cause blue eyes in these dogs.

Some breeds like Collies, Shelties, Border Collies, Basenji or Bernese Mountain Dogs get their very symmetrical white markings from so-called Irish spotting. Although this untestable trait can cause some minimal white markings on a dog’s muzzle or a very thin blaze it does not cause blue eyes on its own.

Have you ever wondered why some white dogs almost never have blue eyes? That’s because, in many solid white dogs, the coat color actually happens due to a very light pigment intensity.

White Poodles, Huskies, Westies, Samoyeds, White Swiss Shepherds or Maltese don’t lack any pigment, they were just bred to have the lightest platinum blonde pigment you can imagine. These dogs don’t have any problem with pigment cell migration and no problem getting pigment to the eyes and ears!

So at least some white dogs with blue eyes might not be extreme piebald. They could just have a very light coat color and get their blue eyes from being hidden merle or the blue eye trait.

Albinism is a genetic disorder causing severe problems in melanin production. Albino dogs are easy to spot due to the absence of pigment in their skin, nose, eye rims, hair or eyes. It’s a recessive and rare condition if not bred on purpose.

There are different versions of albinism in dogs. Aside from complete albinism, there are some known cases of partial albinism or colorpoint patterns all of which are associated with pale blue eyes.

No, even dogs with a complete lack of pigment will have icy blue or whitish-blue eyes. The iris is never fully translucent and will show some degree of structural color. Only the pupil is red showing the lack of pigment in the background of the eye.

Puppies tend to have cloudy blue eyes in their first weeks after opening their eyes.

Pigment production in the iris is just delayed causing a temporary lack of pigment that will fade as soon as pigment starts to fill in. The lighter the eye color in the adult dog the lighter these puppy blue eyes will look.

It’s easy to distinguish between these greyish-blue puppy eyes and bright blue eyes that will stay that way. If you look at puppies with complete heterochromia (one brown eye, one blue eye) it’s easy to see the difference between the temporary and permanent blue eye.

Puppy blue also affects dogs with sectoral heterochromia. In this case, pigment only fills in some sections of the iris.

Are Dogs With Blue Eyes Healthy?

In general, eye color by itself does not affect eyesight or eye health! Blue or otherwise.

Of course, cloudiness of the eye lens (e.g. lenticular sclerosis, cataracts) in old dogs and any eye color changes in adult dogs are not normal and should be discussed with your vet!

But blue eyes caused by the blue eye trait (ALX4) don’t point to any further health implications. The same goes for blue eyes in many dogs with white spotting or merle patterns.

So there is no reason to assume that blue-eyed dogs are blind or should have other problems. But: Blue eyes are a symptom of some traits that can affect a dog’s health.

If a dog gets its blue eyes from double merle, extreme white spotting or albinism he can of course have other health problems. Too much merle can result in deafness and eye defects, extended white markings can cause deafness and decreased sun protection. And albinism is associated with increased light sensitivity. But the blue eye color is just a secondary symptom that accompanies these conditions.