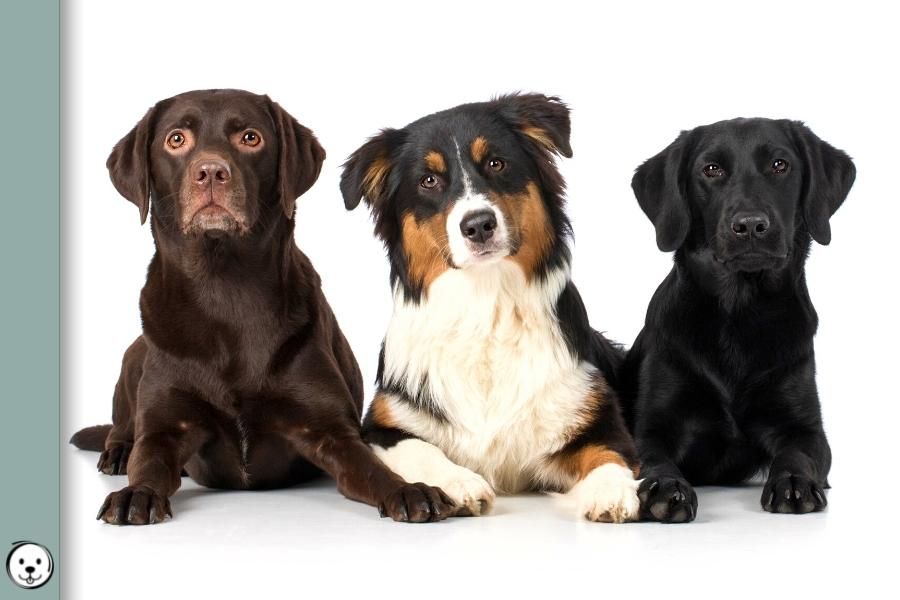 The K-Locus is named for the solid blacK coat it can cause in dominant black dogs[4,5].

With 3 alleles in this series there are currently 6 possible genotypes.

The CBD103 gene at the K-Locus on chromosome 16 encodes the plan for β-Defensin 103. Defensins are a family of proteins that help in the immunological resistance of the skin.

Example: Every yellow Labrador Retriever is KB/KB at the K-Locus but can’t express a dominant black coat because he is also recessive red and can’t produce any eumelanin.

The wild-type kyellow allele has no influence on canine coat color and doesn’t interfere with normal agouti gene expression.

It depends on the genotype at the A-Locus what actual pattern a dog can express. All dogs that are clear sable, shaded sable, agouti, saddle pattern, tan point or recessive black are ky/ky.

Of course, any agouti locus pattern might additionally be influenced by traits found on other loci like white spotting, greying, merle, liver or dilution.

Dogs with a homozygous ky/ky genotype can produce both types of pigment and express the patterns of the Agouti-Series: Sable, agouti, saddle pattern, tan point or recessive black.

The KBlack variant of the CBD103 gene has gained the ability to also play a role in canine pigmentation and pigment type switching.

KB enables β-Defensin 103 to bind to a receptor in the membrane of pigment cells (MC1R controlled by the E-Locus) where it blocks agouti gene expression. This causes pigment cells to exclusively produce Eumelanin and results in a phenotype called dominant black.

The KB allele was found in tooth and bone remains of canids dating back at least 8.000-10.000 years[1]. The mutation probably occurred in domestic dogs but later got into the gene pool of present-day wolves by hybridization with dogs a long time ago[2].

Dogs with a dominant black phenotype are KB/KB, KB/kbr or KB/ky. Dominant black causes a solid coloration in all pigmented areas. It prevents the expression of the Agouti-Locus.

Of course traits like white spotting, greying, merle, liver or dilution have an influence on the actual phenotype of a dominant black dog

Again, this doesn’t apply to recessive red dogs and may look different in domino patterns.

Don’t forget to consider the possibility that self-colored dogs with solid eumelanin-pigmented coat color might in fact be recessive black (kbr/- or ky/ky a/a) instead of dominant black (KB/-)!

The brindle allele kbrindle likely resulted from a recombination between KB and ky.

Somehow this causes a variegated expression of either ky in yellow stripes or KB in black stripes. This creates alternating areas with normal agouti gene expression (ky) and irregular vertical stripes of solid black color (KB).

The A-Locus controls how brindle will look on a particular dog. All dogs that visibly are brindle sable, brindle agouti, brindle saddle pattern or brindlepoint are either kbr/kbr or kbr/ky.

Btw, since kbr combines features of KB and ky every dog with kbr (KB/kbr or kbr/-) allele will test as KB/ky. At the moment there is no test that can reliably detect the kbr allele.

Like the rest of the possible patterns controlled by the K-Locus brindle can be overruled by recessive red and modified by domino.

We don’t know what causes seal, but these phenotypes commonly happen in dogs with a KB/ky genotype and are often attributed to the K-Locus.

Other loci or modifiers may be responsible for seal or ghost tan, we’ll see.

Seal and ghost tan phenotypes are often described as “bad black” since they cause dominant black to become “transparent”. Suddenly a dog’s agouti gene pattern can shine through and is not covered by dominant black as one would expect.

In genetically sable dogs (Ay/-) this affects all pigmented areas and is called seal. If a dog is genetically tan point (at/-) only some faint tan markings will become visible which is called ghost tan.

It depends on the particular breed and their usual patterns if testing the K-Locus makes any sense. Also, keep in mind that kbr is not testable at the moment and will be reported as KB/ky.

But if brindle is not present in a particular breed normal testing for KB and ky is enough to test for all possible combinations (KB/KB, KB/ky, ky/ky).

If your dog shows normal agouti gene expression and is visibly sable, agouti, saddle pattern or tan point without brindle he is clearly ky/ky and needs no further testing of the K-Locus.

But if a dog is dominant black further K-Locus testing can determine if he is homozygous (KB/KB) or carries agouti gene expression (KB/ky).

A test can help predict if a dog is homozygous and can only produce dominant black offspring (KB/KB). Or if he is heterozygous (KB/ky) and has a 50 % chance each to pass on either dominant black or agouti gene expression to his puppies.

This helps predict if a potential mating can produce self-colored or patterned puppies.