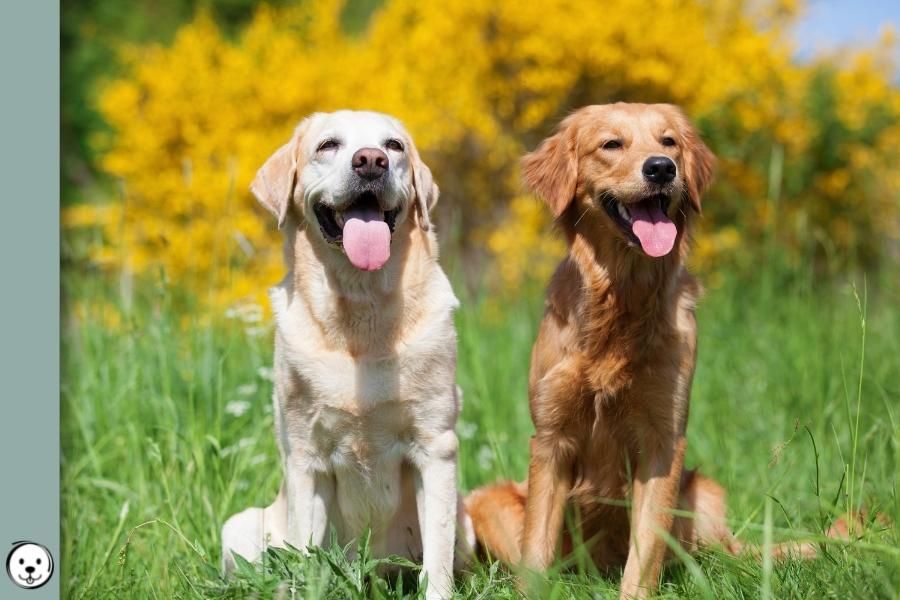 Different amounts of red pigment create phaeomelanin intensity variation from white to yellow up to red. Intensity is a complex trait controlled by a number of different genes.

What is Phaeomelanin Intensity?

Phaeomelanin is a red pigment and one of two pigment types in our dog’s coat. The other one is eumelanin which is responsible for black or brown coat colors.

Depending on the concentration of red pigment in a dog’s hairs coats can be white or cream (Samoyed, Westie), tan or yellow (Golden Retrievers, Great Dane) or orange-red or red (Vizsla, Irish Setter) color.

Different shades of phaeomelanin are not only found on solid-colored dogs. Phaeomelanin in different patterns like tan points or brindle can also express from white to red.

To produce phaeomelanin a dog has to be either recessive red (e/e at the E-Locus) or express a pattern with both pigment types (ky/ky or kbr/- at the K-Locus and sable, shaded sable, agouti, saddle tan or tan point at the A-Locus).

In some breeds, the color of phaeomelanin-pigmented areas is rather uniform due to selective breeding. When we think of West Highland White Terriers, Irish Red Setters or Irish Soft Coated Wheaten Terriers we expect a certain color.

In other dog breeds, there is more variation. Labrador Retrievers, Chihuahua or German Shepherd Dogs come in all colors from cream to red. And Poodles even have a number of varieties each with a distinct phaeomelanin intensity (white, apricot, red).

For a long time, the intensity of red pigment was thought to be caused by variation at a theoretical Intensity Locus.

In reality, the phaeomelanin intensity seems to be controlled by a number of different genes.

At the time of writing, five different loci influencing red intensity have been detected[1]:

So in fact, pigment intensity seems to be a multigenic trait not controlled by a single I-Locus. But even the five loci known at the time of writing can only explain about 70 % of pheomelanin intensity variation found in dogs[1]. So there seems to be even more to discover.

Sometimes intensity modifiers seem to only affect certain patterns. In some breeds like Japanese Akita, Siberian Husky or German Shepherd Dog recessive red dogs usually have white phaeomelanin although dogs with any other pattern will produce red or orange pigment.

Research is ongoing and will certainly make phaeomelanin intensity more predictable in the future. But for now, we have only very little knowledge of how different intensity genes interact with each other.

This is not a simple Mendelian trait and we don’t fully understand how different allelic combinations at the different intensity loci influence pigment color. Additionally, some loci seem to have more impact on color only in certain breeds.

Some breeders claim that dogs with eumelanin color dilution also tend to have lighter phaeomelanin. But there are plenty of breeds with blue-and-tan coats with bright red tan markings on a light blue base. So this rule doesn’t seem to apply to all breeds alike.

Dog breeds with a very light phaeomelanin intensity are often recessive red (they can only produce phaeomelanin but no eumelanin in their coat).

But lightened phaeomelanin also happens in dogs with a patterned coat like Schnauzers or Keeshond.

Dog breeds that are white because of whitehead or extensive white spotting (like Dalmatians or white Bull Terriers) have a somewhat increased risk to suffer from congenital deafness or sunburn. They can have unpigmented patches on their nose and skin and are more often born with blue eyes.

Dogs with white pigment on the other hand are not prone to any problems related to pigment loss or problems with pigment distribution. They simply are white because of a lowered pigment density inside the hair shaft.

Many dog breeds with an intermediate red pigment density that causes a tan, blond or yellow coat. This segment spans a white range of colors between light yellow and light orange and could have easily been split into further subcategories.

Very many breeds with a tan point pattern prefer bright red markings and even call them things like copper or rust. And there are some dog breeds with a solid red coat.