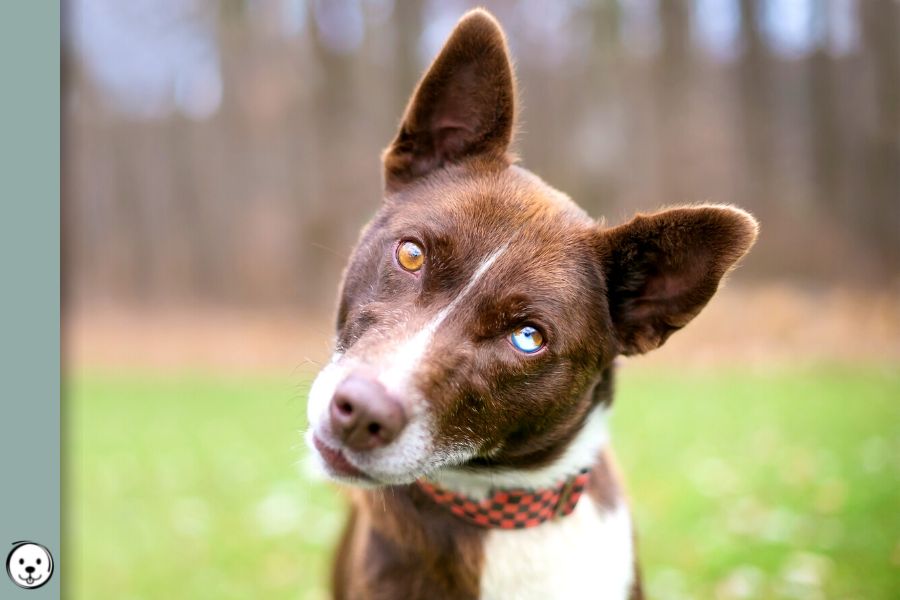 Dogs can have different eye colors like brown, hazel, amber, yellow, blue, green or different in-between shades just like us. Dogs can also have different colored eyes or eyes with more than one color. Here we take a look at all the different dog eye colors and what causes them.

What Determines Eye Color in Dogs?

When we talk about all the naturally occurring dog eye colors we usually refer to the color of a dog’s iris.

The iris is the colored membrane surrounding the pupil of the eye. The iris tissue contains not only pigment granules but also a mesh of fibers, blood vessels, nerves.

The iris reacts to different amounts of light and can contract or dilate to control the diameter of the pupil, a hole located in the center of the iris. Behind the pupil we find the lens that directs light to the retina at the back of the eye. Btw, a dog’s pupil just like ours always has a round shape.

Eye color is a polygenic trait with many unknown modifiers and variables. But there are some known characteristics that determine the general color of a dog’s eyes.

Dogs produce two types of pigment in their coat, yellow or red phaeomelanin and black or brown eumelanin. Despite the great variety of eye colors, it is only eumelanin pigment that gives color to a dog’s iris or his eye rims, skin, nose, paw pads or nails.

How does that work? When light enters the stroma of the iris some wavelengths get absorbed by eumelanin granules. The remaining light bounces off different structures in the iris tissue and some of it may get reflected back outside. This creates the color we see when we look into our dog’s eyes.

Different gene variants can cause a dog to produce brown pigment instead of black pigment or diluted pigment colors called slate, grey or blue (diluted black) or lilac (diluted brown). Each dog produces its own shade of eumelanin which is either black, brown, slate or lilac.

But not only the color but also the color intensity varies from dog to dog. Brown eyes can be light brown, orangey-brown, dark brown or almost black. Yellow eyes can have the color of honey or amber or be very pale with a greenish hue.

The more eumelanin there is and the denser it is packed the darker the eye will look. This creates many different nuances and a huge spectrum of dog eye colors.

Dogs with black pigment and a high pigment density have very dark eyes while dogs with lighter pigment (brown, blue, lilac) and a very low pigment density will have very pale eye colors. And of course, there are many possible combinations in between.

You see, there is no green or blue pigment type in dogs since eumelanin can only be (diluted) black or brown. So if the color of the iris is not caused by eumelanin pigment color but instead due to a lack of pigmentation we call this a structural color.

Structural color is caused by light interacting with eye tissue instead of pigment molecules.

When there is no pigment to absorb some of the light entering the iris all the light gets randomly and diffusely scattered by different fibers and particles. Since blue light is scattered back outside into the open air more easily than other wavelengths this gives the impression of the eye being blue.

This is called the Tyndall effect.

A partial or complete lack of pigment creates eye colors like blue, pale green or yellowish-green hazel eyes. Even dogs with absolutely no pigment in their iris (yes, even albinos) rarely have a completely translucent membrane. In many cases, their eyes instead look whitish or icy blue.

A specific eye color is a characteristic trait of many dog breeds and is often part of the breed standard. In most dog breeds dark eyes are preferred and selected for and lighter eyes are tolerated if not avoidable.

To describe different eye colors we use purely descriptive terms like brown or blue. But there is no precise definition for different colors. So naturally, there is some overlap between different colors like light brown or dark amber. And some people get creative and come up with their own terms or defintions.

We don’t know too much about dog eye color genetics yet. But we know that eye color is mostly associated with eumelanin pigment color and so often correlates with a dog’s coat color.

Some unknown modifiers determine how much pigment is produced. Every of the common dog eye colors has gradual nuances that are somewhat darker or paler. And some additional factors like white spotting or merle can interfere with pigment production and influence a dog’s eye color.

But now it’s time to take a closer look at all the different dog eye colors.

Since black is the most common pigment color in dogs most dogs have brown eyes. Some dogs with black pigment can have very dark and almost black eyes.

But most commonly these dogs have dark brown or light brown eyes. Very light brown can have a yellow or orange hue and be classified as amber by some.

Amber eyes are dark yellow or honey-colored, they are often seen in dogs with liver pigment. Dogs with color dilution but very densely packed eye pigment might also have dark yellow eyes.

Hazel can have different meanings and is sometimes used as a synonym for “light brown“. But it is also often used when the eye has some different hues and a greenish-brown glow.

Yellow eyes can be light amber or palish green-yellow.

Yellow eyes most often occur in dogs with brown or diluted pigment. In dogs with a black coat, they can give a rather harsh expression. For this reason, some people call light yellowish eyes “bird of prey-eyes“.

Dogs with green eyes have very little but still some pigment.

Dogs with blue and green eyes get their looks from some structural color caused by scattered light. In combination, this gives a very pale yellow eye with a greenish shade to it.

A dog has blue eyes when something causes a lack of pigment in the iris of his eyes. And this can have some very different reasons:

Although blue is a structural color it can have some different shades.

Dogs with albinism are commonly described as “white dog with red eyes”. But in reality, they still have whitish or pale blue eyes and only the pupil shines red.

Heterochromia iridum is a term used to describe dogs with more than one eye color.

Heterochromia most often happens in dogs with pigment deletion due to some form of white spotting, merle or blue eye trait reported in Siberian Huskies or Australian Shepherds.

Dogs with complete heterochromia have two eyes of a different color. Bi-eyed dogs most often have one blue and one brownish eye.

In sectoral heterochromia, a dog has two different colors in one eye. There is a lot of variation from brown eyes with blue segments to blue eyes with brown segments. Parti-eyed dogs can also have marbled eyes.

When puppies open their eyes they often have a cloudy blue color also called puppy blue.

At this point, their iris still lacks pigment. Around one month of age, the color starts to come in but it can take weeks or months until the young dog’s eye color reaches its final state.

The color change in puppy eyes runs through different stages. Puppy blue eyes first turn green and yellow before maybe getting a darker amber color or maybe even darken all the way to brown. What eye color a specific puppy will keep depends on its pigment color.

In puppies with marbled eyes (sectoral heterochromia) the pigmented segments also get their color bit by bit. This looks like darker spots are growing in an otherwise blue iris.

Unfortunately, Puppy eye color change sometimes creates disappointment when people think they bought a dog with an especially striking pale green eye color not realizing this color will not last for long.

Dogs with blue eyes already have their truly blue eyes at birth. And with some practice, it’s relatively easy to distinguish between temporary puppy blue eyes and permanent icy blue eyes.

As you now know the eye color depends on the color of eumelanin a dog can produce. So the rarest eye colors in dogs are commonly those that are associated with rare coat colors.

Don’t forget that the amount of pigment can create darker and lighter shades of any given eye color. Some very dark but especially the very pale shades are rarer than medium colors.

Black is the default color of eumelanin so brown eyes are very common in dogs. But it’s rare to see a black dog with pale eye colors.

Brown eumelanin is a recessive trait associated with amber eyes which are not too uncommon. But only very few brown dogs keep their very pale puppy eyes with a shade of green.

Dogs with diluted black pigment (blue) often have pale amber or yellow eyes but some have green-grey or green-yellow eyes. Again, color dilution is a recessive trait and so these paler eye colors are rarer than normal brown eyes.

Dogs with both liver pigment and color dilution have diluted brown eumelanin (lilac). This combination of two recessive traits creates some of the palest natural dog eye colors often described as green-blue, sky blue or green-yellow.

Blue eyes are often associated with traits that cause some loss of pigment like white spotting or merle. And some breeds have a dominant trait that can cause blue eyes without an effect on the coat.

And heterochromia occurs mostly in dogs with a strong enough merle allele.

When we look at rare eye colors we have to estimate how likely some colors appear naturally.

But don’t forget that rare coat colors are often bred on purpose, occur more often in certain breeds and eye color can be selected for to some degree. So of course a population of color-bred lilac merle dogs with Australian Shepherd in their pedigree will have uncommon eye colors compared to any average black dog!

Glow in the Dark

The tapetum lucidum is a layer of iridescent tissue found behind a dog’s retina.

Light is reflected back outside and passes the retina a second time. This increases the light available to the photoreceptors and gives superior night vision. It’s an adaption seen in many nocturnal animals and animals that are active during twilight.

The tapetum lucidum also creates the glow in our dog’s pupils when we shine light at them in low light or try to take a picture with the flash put on.

The color of the eyeshine is most often greenish in color but varies with the angle at which it is seen. So the eyes can also glow yellow, white or blue.

In blue-eyed dogs, we can often experience the red-eye effect when using flash photography.

Red eye glow in dogs is mainly caused when light is reflected by the blood vessels behind the retina. Dogs with blue eyes lack pigment not only in their iris but also in the tissue in the back of the eye.

In dogs with heterochromia, the color of the eyeshine can vary between eyes.

The natural color of a dog’s eye has no influence on his eyesight!

But there are many different conditions associated with eye color that are relevant to a dog’s health. Some express as “weird” eye coloration, others can cause eye color change.

Not all of these problems are problematic for the dog but some might be. And please, always consult your vet if you don’t know if your dog has a serious condition!

Here are some examples of discoloration or color change phenomena: