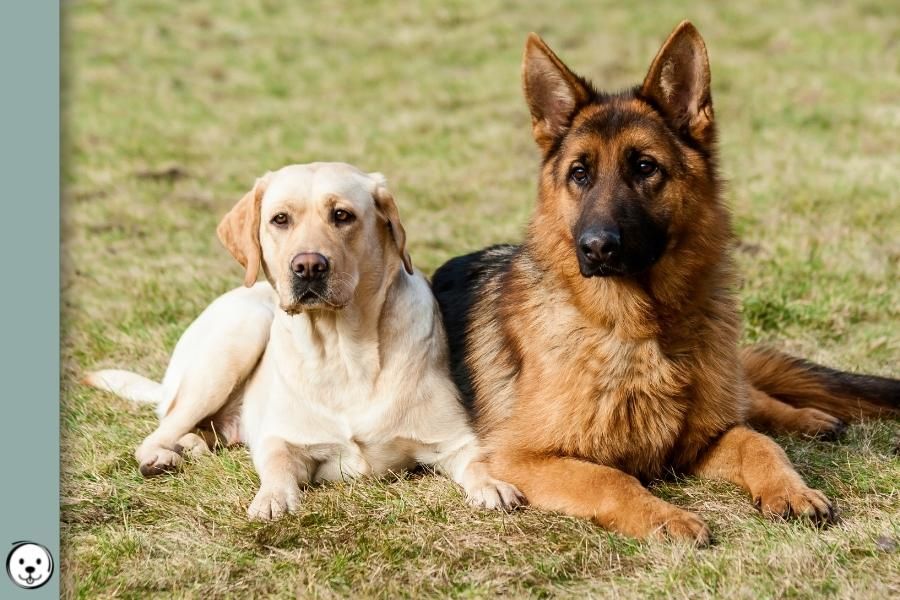 The E-Locus defines how much eumelanin can be expressed. Different alleles can cause melanistic masks, domino, grizzle and cocker sable phenotypes or recessive red coat.

The Extension-Locus was named a long time before genetic testing was available. It got its name because it can extend the amount of black to yellow pigment in any coat pattern.

Alleles at the E-Locus are thought to work in a more or less complete autosomal dominant-recessive manner.

This is the dominance hierarchy of the alleles at the E-locus:

The different domino alleles (eA, eG, eH) seem to have very similar effects and are sometimes mentioned as eD for eDomino.

There is limited info about the hierarchy and interaction of these alleles with one another (simply because there aren’t too many Husky-Spaniel or Borzoi-Malamute mixes out there).

So for now we don’t know for certain if combinations like eA/eG or eH/eA would actually look any different than any of these dominoes on their own. So the hierarchy between these variants remains unknown.

Counting different versions of recessive red (e1-3) there are actually 8 known alleles at the E-Locus so there are currently 36 possible combinations like Em/e or E/eG. These are the phenotypes controlled by the E-Locus:

The MC1R gene at the E-Locus in chromosome 5 holds the plan for the Melanocortin 1 Receptor. This receptor is found in the membrane of pigment cells where it works as a signaling molecule able to promote eumelanin synthesis.

Pigment cells by default produce only white, yellow or red phaeomelanin. But when MC1R detects particular signaling molecules it can order the cells to build black or brown eumelanin.

The E-Locus plays a central role in pigment type switching.

Depending on what alleles a dog has the E-Locus can promote, enable, restrict or inhibit eumelanin production in any pattern provided by the K-Locus and A-Locus.

Melanistic masks express as areas of additional eumelanin-pigmented coat on a dog’s muzzle. Of course, masks need a light base color on the dog’s muzzle because you can’t see a black mask on a solid black dog.

So dogs with a visible melanistic mask usually are sable, agouti, saddle pattern or tan point with or without brindle. White spotting on a dog’s face can hide a melanistic mask.

Masks can be very minimal or extend to a dog’s chest and legs and can increase dark shading in the coat. Since masks get their color from eumelanin they can be black, brown, blue or lilac depending on a dog’s B-Locus and D-Locus.

The wild type allele E does not interfere with eumelanin expression. Whatever a dog has on its K-Locus and A-Locus will be expressed normally.

Any dog that displays a regular pattern with expected levels of phaeomelanin and eumelanin like sable, agouti, saddle or tan point without mask or domino should test as E/-.

Domino restricts eumelanin production in any given pattern. It causes a light undercoat and a pale hair base while also reducing dark shading and dark hair banding. Domino usually makes any area with solid eumelanin smaller while causing bigger phaeomelanin markings.

But how a dog with ancient domino actually looks depends on its original pattern[7]. Interestingly, many affected dogs have a pink stripe down their nose.

Since eA was found in dog remains from 10.000 years ago it was named eAncient Red[6]. But since this allele is mostly found in northern breeds where it causes the typical pale facial pattern of Alaskan Malamutes or Huskies it is also called northern domino.

This variant was also proven to occur in many other breeds like Chihuahua, Beagle or Tibetan Spaniel.

The eG allele works in a very similar manner as ancient domino. It is considered quite rare and also limits the amount of eumelanin in any pattern it works on[3].

Since this variant is found in many sighthound breeds it is often seen in combination with the very frequent tan point pattern these breeds display. In Salukis the resulting looks with big pale facial markings and a widow’s peak are known as grizzle, in Afghan Hounds it is called domino and in Borzoi it is known as sable.

All three e alleles (e1, e2, e3) are loss-of-function variants that make it impossible for the Melanocortin 1 Receptor to promote eumelanin production. Most breeds only have e1, the e2 variant was found in cream-colored Australian Cattle Dogs and e3 was found in white Huskies[1].

But any combination of e alleles (e.g. e1/e2 or e2/e3) causes the same recessive red coat since they all leave the E-Locus unable to work properly.

Since recessive red dogs can only produce phaeomelanin they have a solid white, yellow or red coat in all pigmented areas.

With only phaeomelanin, these dogs can’t express any pattern that would require at least some eumelanin. So any dark shading, hair banding, tan point or saddle pattern, brindle and even merle will be masked by recessive red!

Depending on the interaction between alleles the E-locus can cause some very different phenotypes. There are some things to consider when testing a dog’s E-Locus.

When breeding a recessive red dog genetic testing is highly recommended since this coloration masks all patterns and gives no information about a dog’s genotype at other loci. This is especially true when breeding with merle since recessive red hides any merle pattern!

Also, consider that not all laboratories can test for all E-Locus variants. You should take your dog’s breed background into consideration when choosing the right coat color test for you.

Not all companies test for all versions of recessive red. When your dog has a version that can’t be detected the test result will report the wild type (E). So if a company can only test the common e1 allele a white Husky with an e3/e3 genotype will likely come back as E/E.

The same goes for domino alleles that will not be detected when a test only searches for Em, E and e to begin with. So a dog that is actually domino (eA/e) might come back as E/e or a dog that carries grizzle (E/eG) will come back as E/E.