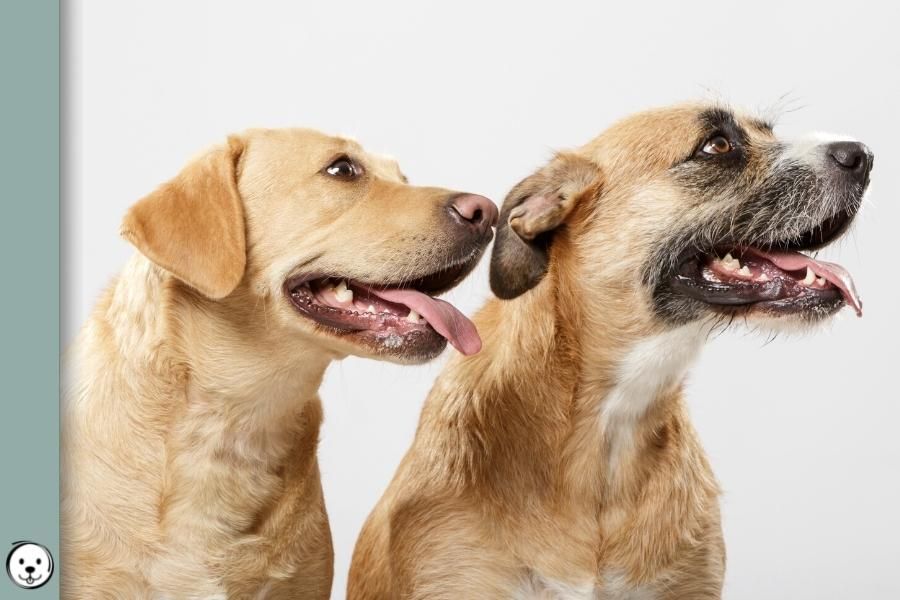 Some breeds like Golden Retrievers and Labrador Retrievers or varieties like white Poodles or black German Shepherds produce only one type of pigment and have a single-colored coat.

But most dogs can produce both eumelanin and phaeomelanin and have banded hairs, yellow coats with darker hair tips or other patterns with areas of darker and lighter pigment.

Here you can learn what makes a pigment cell switch from one pigment type to the other and how the E-Locus, K-Locus and A-Locus interact to create different patterns.

But: This information is a bit technical and is helpful but in no way essential for grasping the concept of canine color inheritance. Feel free to skip this chapter or come back later.

Melanocytes are melanin-producing pigment cells. These pigment cells are found in the hair follicle where they by default produce phaeomelanin unless told otherwise.

Phaeomelanin is a yellowish pigment, but depending on the density of pigment can cause different shades from white to all shades of blond or even dark red.

Eumelanin is a black pigment, but can also come in brown, blue or isabella. The cell has the ability to produce eumelanin but needs a special order to do so.

But how can the pigment cells be told what pigment type to make?

Here the E-Locus comes into play!

The Extension Locus or short E-Locus encodes the building plan for a receptor found in the membrane of melanocytes. This Melanocortin 1 Receptor or MC1R can be activated from the outside of the cell. If the right molecule comes along and binds to MC1R the pigment cell gets a signal to activate eumelanin production.

If all things work according to plan this happens when α-Melanocyte-stimulating hormone (α-MSH) is secreted by the pituitary gland and binds to MC1R.

The various alleles on the E-Locus are building plans for some slightly different versions of the Melanocortin 1 Receptor:

If a dog inherits the recessive e allele from both parents he can not build a normally functioning MC1 Receptor. The pigment cells consequently remain forever locked in their default setting to only produce phaeomelanin.

This is why the genotype ee leads to an all-white, all yellow or all red phenotype and is called recessive red. Typical examples are Golden Retrievers, Irish Setters or Apricot Poodles.

At the Agouti Locus or short A-Locus lies the building plan for Agouti signaling Protein or ASIP.

ASIP wants to bind to the Melanocortin 1 Receptor, it functions as a competitive antagonist to α-MSH and blocks access to MC1R. So if ASIP is present α-MSH can’t bind to MC1R and can’t signal the cell to produce eumelanin. And without a signal from α-MSH the melanocytes produce phaeomelanin.

In any body part where ASIP is expressed the hairs might come out all yellowish since the cells primarily produce phaeomelanin. If ASIP is expressed in intervals the coat will be banded with darker and lighter stripes of pigment.

The different alleles on the A-Locus known up to now cause different patterns:

If a dog inherits the recessive a allele from both parents he can not build a normally functioning Agouti Signaling Protein. The pigment cells can not be stopped from producing eumelanin.

This is why the genotype aa leads to an all-black (or brown, blue, isabella) phenotype and is called recessive black.

The DEFB103 gene at the K-Locus encodes the building plan for β-Defensin 103 (CBD103). This protein normally is part of the innate immune response system of the skin.

In dogs there is a mutated version of the β-Defensin 103 known as KB allele.

KB is able to bind to the MC1 receptor where it promotes eumelanin production and blocks both ASIP and α-MSH from binding to MC1R[1].

KB masks the effect of ASIP so dogs with at least one KB allele cannot show whatever pattern they have at their A-Locus. Since affected dogs only produce eumelanin this phenotype is called dominant black.

We know of 3 gene variants at the K-Locus:

Please note that in some rarer phenotypes like seal or domino the KB variant has a less strong effect and can’t fully block phaeomelanin production.

The K-Locus and the A-Locus need a functioning Melanocortin 1 Receptor to work their magic.

An ee genotype can mask whatever a dog has at his K-Locus or A-Locus, so the E-Locus is epistatic to the other two loci.

The A-Locus should have no effect on coat color when KB is present. So the K-Locus has epistatic control over the A-Locus. Exemptions to this rule occur in Seal or when one of the domino alleles at the E-Locus eA, eG or eH are present.

Here you can find a quick overview of the outcome of all the possible combinations: