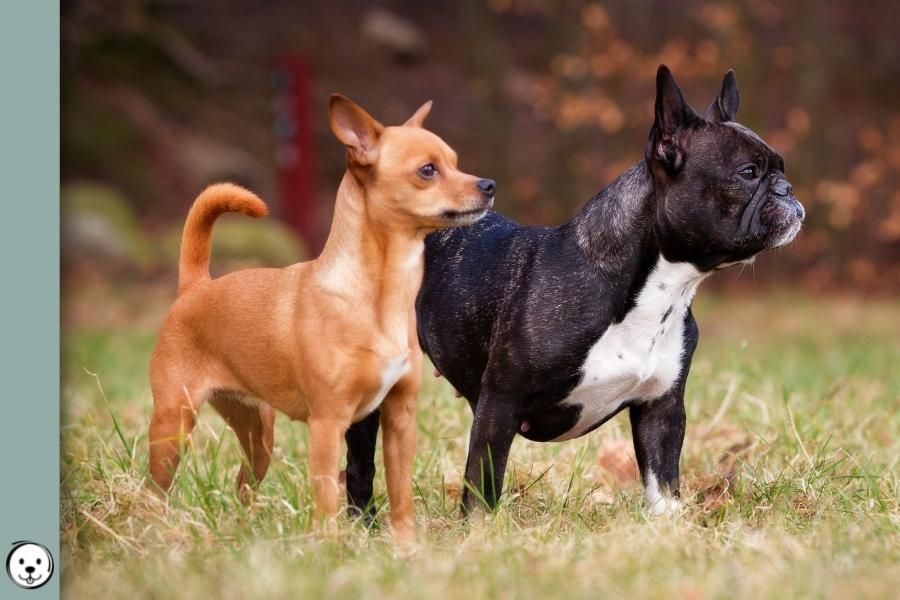 You want to learn more about the genetics of all the colors and patterns in a dog’s coat? Perfect, the first thing you should learn is to tell apart the two different types of pigment we can find in our dog’s coat.

Pigment is what gives a dog’s coat its unique color, but it also influences the eye color, nose color or skin color of our dogs. And the interaction between different pigment types eventually determines if a pooch has a solid-colored coat or a patterned coat.

Each hair follicle has pigment cells called melanocytes which build and transfer pigment into the developing hair. All the different colors and patterns in our dog’s coats are created by either eumelanin or phaeomelanin. But a lack of either of these types of melanin creates a white coat.

By default (also called “wild type”) eumelanin in a dog is a black pigment.

But there are genes that can modify the color of eumelanin in a dog from black to either blue, brown or isabella.

So all the areas on a dog’s coat that get their color from eumelanin are always either black, brown, blue or isabella depending on the dog’s genotype.

But eumelanin does not only dye your dog’s coat a certain color, it is also the pigment type that influences the coloration of a dogs eyes, skin and nose pigment.

Even if you can’t see any eumelanin in a dog’s coat at all (e.g. in all-white dogs), you can in most cases determine the eumelanin color by looking at the dog’s nose pigmentation.

This is not only true for solid-colored dogs but also applies to multi-colored and patterned dogs alike. Whatever pattern a dog’s coat has all the visible eumelanin will always have one of the colors black, brown, blue or isabella!

But depending on the coat color the shade of a dog’s eumelanin may not always be obvious by looking at the fur alone. You should always consider a dog’s nose color to see what color of eumelanin he can produce.

We often describe a dog’s coat color pattern in reference to its shade of eumelanin. When talking about coat colors we often use terms like “Black and Tan“, Chocolate Merle“, “Blue Brindle” or “Isabella Fawn“.

But how does eumelanin work on a patterned dog?

The second type of pigment in a dog’s coat is called phaeomelanin.

This pigment can have shades from white through blond or orange to deep red mahogany or chestnut. phaeomelanin is often called the yellow pigment or red pigment, but it covers the whole range of tan colors from very light to very rich.

Instead of distinct colors like eumelanin (black, liver, blue or isabella) phaeomelanin rather works on a scale and there are many different possible hues depending on phaeomelanin intensity.

In the coat of deep red-colored dogs like Irish Setters we find pigment granules packed in a higher density. And in lighter shades like white, cream or ivory we can find a lower density of yellow pigment.

We even sometimes can find some different shades of phaeomelanin on the same dog due to e.g. darker pigment on the ears or countershading with lighter coloration on the dog’s belly.

If you look at a dog with a solid white, yellow or red coat you sometimes will have to inspect its nose and skin color to identify the base color of its eumelanin since you won’t find any in the coat.

Although all the colored parts of a dog’s coat get their color either from eumelanin or phaeomelanin or both, there is a third “color” a dog can have.

Sometimes there are simply no pigment cells that could produce any pigment. In these areas a lack of pigment causes the coat to simply remain white.

This lack of pigmentation can in some cases extend to the skin and eye color and e.g. cause pink patches on the nose (aka butterfly nose) or blue eyes.

But not every white dog really lacks pigmentation!

As I just mentioned phaeomelanin can sometimes have a very, very, very light shade and turn a dog white with maybe only the slightest sheen of ivory color on the ears or not even that.

The difference is that many white breeds and varieties like white Poodles, Maltese, Samoyeds or Westie are actually pigmented all over, their phaeomelanin pigment just turned a very light color.

The big difference between a very light pigment density and a truly white dog is that in the dogs with white phaeomelanin intensity there is no actual lack of pigment in the coat.

Breeds with white pigment intensity don’t suffer the same consequences as breeds with extreme white spotting. Without a lack of pigmentation of the nose, skin or eyes seen they are not as sensitive to light and don’t have the same risk for congenital deafness as extreme white piebald dogs.

Pigment in solid or patterned dogs

Some dogs only have one of both types of pigment in their coat.

If a dog is solid black, blue, brown or isabella dogs his pigment cells only produced eumelanin (from dominant black or recessive black). And in a solid red, yellow or pearl white dog obviously only phaeomelanin was produced (from clear sable or recessive red).

But of course, many dogs show a patterned coat with both types of pigment and/or with white markings.

Btw, these patterns are mostly controlled by whatever gene variants a dog inherited on its K-Locus, E-Locus and A-Locus and their interaction in controlling the pigmet type.

In some patterns, the change from one pigment type to the other follows a spatial pattern with more or less clearly defined edges between the different colors like in brindled dogs or black-and-tan dogs.

In other patterns, the change from one color to the other happens in single hairs and follows temporal intervals which lead to color bands.

We can find banded coats in shaded sables or wolflike agouti coats.

Noteworthy: In many breeds, we find many purely descriptive terms that can get quite odd or imaginative like phantom (Poodle term for tan points) or dapple (Dachshund term for merle).

These breed-specific terms for coat colors can be a little puzzling for beginners. Please remember that traditional names for some colors are rarely based on coat color genetics.

I know this can be confusing at first. But we have to start somewhere and understanding the types of pigment and their influence on a dog’s color is essential for understanding dog color genetics. Continue here if you feel ready for some genetics basics.