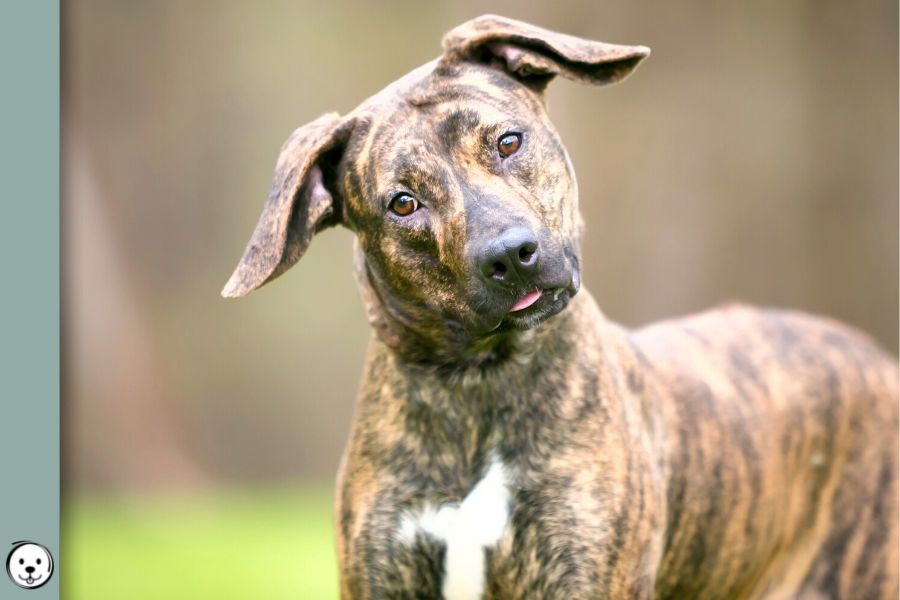 Brindle (kbr) is a color pattern causing black, blue, brown or lilac stripes on a red or yellow base color. Here we look at the variations and genetics of brindle coat in dogs.

While brindle stripes often seem quite irregular they often follow some basic direction with a V-shape along the back and stripes running vertically and loosely following the shape of the body.

Both eumelanin and phaeomelanin are visible in this pattern and many traits like merle, greying, color dilution, liver, white spotting, ticking, intensity or countershading can have an influence on how a brindled dog actually looks.

And there might also be some yet unknown modifiers that affect the expression of different brindle patterns.

There are three alleles at the K-Locus: KB (dominant black), kbr (brindle) and ky (normal expression).

The wild type allele ky causes normal production of eumelanin and phaeomelanin in all patterns. The dominant allele KB causes a dominant black coat with only eumelanin.

kbrindle is recessive to KB but dominant over ky. The kbr allele causes a mix between these phenotypes with stripes of eumelanin on all coat areas pigmented by phaeomelanin.

kbr causes a somewhat random variegated expression of the KB allele on red coat. And this is hardly surprising if we consider that the kbr orignated from a recombination event between a KB and a ky allele. So the brindle allele essentially is a duplication of the K-Locus on one chromosome.

The brindle stripes give us a clue about the pathways the pigment cell precursors (melanoblasts) traveled across our dog’s body. During embryonic development, they migrate from the neural crest along the body all the way to the extremities. And in brindle dogs, some cells produce a solid black coat (KB) and some produce a solid yellow coat (ky) creating a striping pattern.

And since brindle is already present in breeds of ancient origin like Akita, Shiba and other asian spitz breeds the first brindled dog likely lived several thousand years ago. Today brindle is found in dogs from all breed groups like Dachshund, Mastiff, Irish Wolfhound or Cairn Terrier.

By the way, at the moment there is no commercial test available testing for brindle. Instead, KB/kbr, kbr/kbr or kbr/ky will all be reported as KB/ky since elements from both alleles are present.

When will a dog be brindled?

To have a brindle pattern with alternating stripes of eumelanin on phaeomelanin a dog has to be able to produce both types of pigment and to switch from one to the other.

So brindle won’t be expressed in dogs that are either recessive red (phaeomelanin only), dominant black (which would be KB/kbr anyway) or recessive black (eumelanin only).

And of course, the coat has to be pigmented at least in some areas. If a dog is all white e.g. due to extreme piebald we can’t observe the brindle pattern.

Brindle can affect different agouti patterns and can itself be affected by a variety of different genes explaining the many different looks on brindle dogs!

The brindle pattern in some dogs is very minimal with only some sparse stripes here and there.

Minimal brindle can be found in many breeds from Great Dane to Bulldog and is often seen in sighthound breeds like Whippet, Galgo Español or Greyhound. Sometimes stripes even seem to be missing from the pattern.

But brindle can also get very heavy up to the point where the dog looks almost completely black.

Since a very dense striping pattern gives the impression the dog had actually red stripes on black coat this is sometimes called black brindle or reverse brindle. But there is no such thing and technically all brindle dogs express black stripes on a red coat.

The distinct stripes in brindle patterns can be seen most clearly in shorthaired dogs. But of course, many breeds with very different coat qualities can sport a brindle pattern.

The brindle pattern on wirehaired and furnished, curly or longhaired dogs is less visible and often causes a muddy color with darker and lighter areas that seem to blend into one another.

The most basic brindle pattern is a brindled sable. Sables have yellow coat all over the body with varying amounts of dark shading. Some of the sable pattern can be covered by white spotting or a melanistic mask, but usually, there is plenty of space where brindle can show.

Shaded sable and even clear sable with brindle can get quite dark especially along the dog’s back. This can obscure some of the brindle pattern.

Agouti causes alternating dark and light bands in single hairs and usually appears very greyish and can get quite dark. The combination of agouti and brindle is quite rare.

But the effect is nearly the same as in heavily shaded sables because brindle stripes become less visible or not visible at all on an already very dark coat.

In tan pointed dogs, black stripes will only be visible in the lighter tan markings. Such a brindled tan point pattern is often called brindlepont.

In dogs with already very sooty tan points, an extended dark mask, a white blaze or white spotting on the lower legs the tan points and thus the brindle pattern can become very small and barely visible.

Tan pointed dogs with white spotting are commonly called tricolor (e.g. a black-tricolor would be black-and-tan-and-white). As in a normal tan point pattern, brindle will only affect the tan markings.

The combination of brindle with white markings on a black and tan dog is sometimes called trindle (as in tricolor-brindle).

Since brindle only affects red coat only the lighter areas on a saddle patterned dog get bridle stripes. The same goes for the intermediate forms like creeping tan.

Brindle on the muzzle can be covered up by a melanistic mask. This is a common combination in breeds like Boxer, Mastiff, French Bulldogs, Great Danes or Dutch Herder.

While most dogs have a yellow to red pigment intensity under their brindle stripes their base color can be affected by intensity modifiers like the I-Locus. Phaeomelanin pigment color can actually vary from off-white to deep red.

Dogs with a very light base color are sometimes called silver brindle, cream brindle or other names.

Sometimes only the phaeomelanin on a sable, agouti, saddle or tan point pattern can get very light on the dog’s cheeks, eyebrows underside while keeping a normal color on the upper side of the dog.

This phenomenon is called countershading. In brindled dogs, it gives the impression of a color transition underneath the black stripes.

In some Asian spitz breeds, a similar effect is known as urajiro. This is just a Japanese breed term for countershading but these breeds are known to often have more crisp and bright light markings instead of a color gradient from lighter to darker coat.

The color of eumelanin in brindle stripes can be black, brown, blue or lilac.

The combination of liver-colored eumelanin and brindle pattern (kbr/- b/b D/-) is quite rare. Besides, brown stripes on a yellow or red base color don’t give as much contrast as black stripes would.

In a dog with a diluted black brindle pattern (kbr/- B/- d/d) all eumelanin will turn a blue shade.

Since blue stripes o yellow or red coat again isn’t as rich in contrast as black stripes the striping often is not as distinct as it would be in a black dog.

A brown dog with pigment dilution (kbr/- b/b d/d) will have lilac stripes on a yellow or red coat. This is a very rare combination and is often barely visible.

Grey Brindle can be found in Irish Wolfhound, Scottish Deerhound and some terrier breeds like Cairn Terrier.

White markings (from things like piebald or whitehead) are areas with a lack of pigmentation. Since neither phaeomelanin nor eumelanin is visible in the white coat the brindle will be hidden “under” the white spotting.

Many sighthounds like Whippet or Greyhound often come in brindle-white. This can also be observed in the trindle pattern (tricolor and brindle) mentioned above.

Ticking only affects white coat where it shows as pigmented dots and speckles in the original color the coat would have had at this spot. So on a brindle patterned dog the spots would be brindled.

Roan is expressed as areas with many fully pigmented hairs growing in white coat. Roan can get quite dense and give the impression of an almost fully pigmented coat. But the combination of roan and brindle is rather rare.

I’m still searching for mottled or roaned dogs with an underlying brindle pattern. This dog shows extreme white spotting with some colored spots on his ears to illustrate the effect:

Merle deletes some of only the eumelanin in a dog’s coat. While the red or yellow coat is not affected all eumelanin will be a mix of fully pigmented and diluted patches.

Great Danes have a breed-specific merle modifier known as harlequin that only affects dogs with a merle genotype but will not be visible on non-merled Great Danes.

A H/h genotype at the H-Locus will cause all diluted areas in a merle coat to be fully deleted to white. This gives a distinct pattern with fully pigmented patches on a white coat.

The only desired harlequin color is black and white so most breeders try to plan accordingly.

But harlequin absolutely works on sable merle or brindle merle coats. These phenotypes are typically dubbed fawnequin or brindlequin.

Seal seems to make eumelanin transparent to some degree and lets the hidden agouti locus pattern shine through from underneath. But the exact mechanisms behind seal coloration are not yet identified.

Most often seal only affects heterozygous dominant black dogs (KB/ky). Black areas fade and reveal some of the normally hidden sable genotype (Ay/-). Seal dogs typically get a very brownish cast to their coat with a stripe of the black coat down the midline and black coat on the face and lower legs.

There are some rare cases known of brindle expressing on dogs with a seal phenotype.

Domino is most often found in northern breeds (eA) or sigthound breeds (eG) where it modifies the original pattern a dog would have had.

Brindle with domino is quite rare and mostly happens in sighthounds like Afghan Hounds or Borzoi where it can do some interesting things.

On a sable brindle, the domino fades brindle striping. The brindle pattern almost disappears and leaves a light base color with some darker smudges.

And domino on a brindle point pattern will make the black coat on the dog’s back fade to some degree. The brindle can become visible in the black mantle while fading on the dogs face and legs.

Brindle is a very common pattern in many dog breeds. In some of them it’s a very popular pattern (e.g. Boxer, Dutch Shepherd Dog), in others it’s quite rare (e.g. Border Collie):