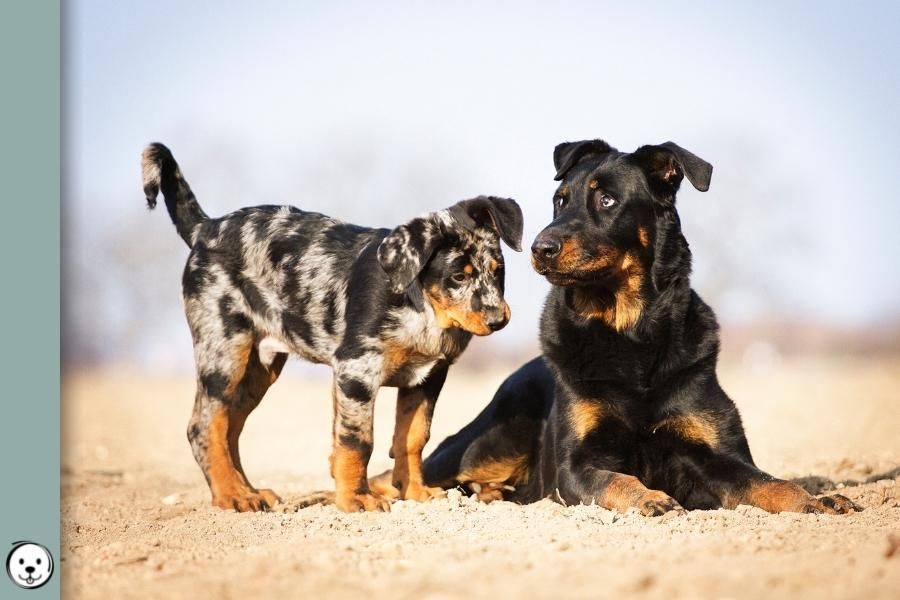 A dog with a tan point pattern has a solid base color with white, yellow or red markings on the muzzle, eyebrows, chest, underside, lower legs, and under the tail. Although this pattern is also called black back or black-and-tan the base color can also be liver, blue, or lilac.

What is a Black Back Pattern?

Dogs with this phenotype have symmetrical tan markings on an otherwise eumelanin-pigmented coat. These lighter markings can be white, yellow, or red and can be found on the muzzle, eyebrows, throat, chest, belly, lower legs, and under the tail.

Interestingly, dogs with a saddle pattern will also be born with a traditional tan point phenotype.

Most of us know this phenotype as tan point or black-and-tan. But since the newer term black back is used by some testing companies we should get used to it.

The A-Locus controls where and when phaeomelanin and eumelanin are distributed in patterns that use both pigments.

To express an A-Locus pattern like tan point the expression of ASIP has to be possible. To have a pattern a dog can’t be dominant black (KB/-) at the K-Locus or recessive red (e/e) at the E-Locus.

Tan points were one of the phenotypes the old A-Locus testing system could detect: Ay (sable) >aw (agouti) >at (tan point) >a (recessive black). But the old A-Locus test couldn’t detect some versions of at nor could it tell the difference between traditional tan points and saddle pattern (both tested as at).

Black back (ASIPBB or at) is the second-most recessive trait at the A-Locus.

The at allel only seems to have incomplete dominant control over a. Dogs that carry recessive black (at/a) will often display smaller tan markings compared to homozygous at/at dogs.

Black back is caused by a particular combination of two regions inside the ASIP gene:

The wild type version of the ventral promotor (VP2) produces the traditional tan point pattern consisting of solid white, yellow, or red areas on the dog’s muzzle, eyebrows, chest, belly, lower legs and under the tail.

The hair cycle promotor (HCP) normally produces a black-tipped (HCP1) or banded coat (HCP2). But there are several loss-of-function variants (HCP3, HCP4 or HCP5) that can’t produce hair banding and instead cause solid black coat.

Any combination of a wild-type ventral promotor and a non-functional hair cycle promotor (VP2-HCP3, VP2-HCP4, VP2-HCP4) represents the new black back allele at. Other combinations (or: haplotypes) represent other alleles (see the A-Locus for more info).

Dogs with a tan point pattern have a dark base color with lighter markings on the muzzle, eyebrows, chest, underside, lower legs and under the tail. They have very specific facial markings and a dark muzzle or a dark ridge between the forehead and nose which is also called a nose bar.

Tan markings can have a very crips border but can in some cases be sooty, smaller or bigger than average or show some black marks, especially on the toes (called penciling or thumbmark).

Additionally, there are many traits that can modify how a black-and-tan will actually look. Let’s go through some examples:

The lighter markings in a black back pattern are pigmented by phaeomelanin. There are some factors that can influence the color intensity on a range from solid white to cream, yellow, orange or even red.

In some dogs, phaeomelanin is darker on a dog’s back than on his belly, throat or muzzle. This is called countershading or urajiro in some Japanese breeds.

This can cause very light areas with very defined edges. Since countershading only affects phaeomelanin can create an interesting color transition inside the tan markings.

Although this pattern is commonly called black-and-tan the base color can be black, liver, blue or lilac. What color a dog’s eumelanin has depends on his genotype at the B-Locus and D-Locus.

If a dog has a brindle variant at the K-Locus (kbr/-) he will express eumelanin-pigmented stripes on top of all coat pigmented by phaeomelanin.

So on a black-and-tan dog, he will produce black stripes on all of his tan markings. A blue-based dog will have blue stripes and so on.

Black Back and Mask

Masks cause additional eumelanin on a dog’s muzzle but can extend beyond the face and cause even more eumelanin on the rest of the body.

On top of a tan point pattern, they can cover some of the tan markings on the face and in more extreme cases even on the chest or the lower legs.

Black Back and White

A dog with tan points and white is commonly called tricolor since he expresses three colors (black-and-tan-and-white). White hides some of the original pattern.

Depending on his eumelanin color different phenotypes are sometimes called black tri, chocolate tri, blue tri or lilac tri. Examples for dogs with a tricolored coat can be found in many dog breeds like Australian Shepherds, Bull Terriers, Bernese Mountain Dogs and Shelties, Border Collies or Collies.

Black Back and Ticking

On some tricolor dogs, some of the color lost by white spotting can return after birth. Pigmented spots that appear inside of white markings will have the color hair at this position would under normal circumstances have had. So on black-and-tan dogs, dots will be black or tan.

Ticked black and tan dogs can be seen in Cocker Spaniels, English Setters and many hound breeds. It is also the reason for the prominent pattern in “blue” Australian Cattle Dogs.

Black Back and Greying

Progressive greying causes a dog’s eumelanin color to fade which turns black to grey and brown to beige.

This affects some dogs with wiry or curly hair as phantom Poodles and many Doodles or furnished long coated breeds like the Tibetan Terrier.

Black Back and Merle

Merle deletes some eumelanin from an expected pattern. It affects only eumelanin so only the black coat on a black-and-tan dog.

Many breeds with black-and-tan or tricolor and merle can be found in the herding group, e.g. in Australian Shepherds, Border Collies, Shelties or Collies.

Black Back and Domino

Domino patterns are generated by inhibiting eumelanin production. This creates larger areas with phaeomelanin which is often a lighter shade than expected.

Tan pointed dogs with domino have huge tan markings while the black mantle gets a pale hair base with a light undercoat and dark hair tips. Very pale facial markings with a widow’s peak resembling a shaded sable pattern are another typical expression of domino.

Domino is a rare trait found only in a comparatively small number of dog breeds. There are different versions of domino around that all seem to work in a similar way:

Ancient domino affects northern breeds but also occurs in some hounds and a variety of other breeds. It is the reason for some of the typical facial patterns of Siberian Huskies or Alaskan Malamute.

Grizzle Domino occurs in sighthound breeds and Cocker Sable is a rare breed-specific version found in (you guessed it!) English Cocker Spaniels and American Cocker Spaniels.

Tan points give a very distinct look and are found in very many dog breeds. Here are some examples: