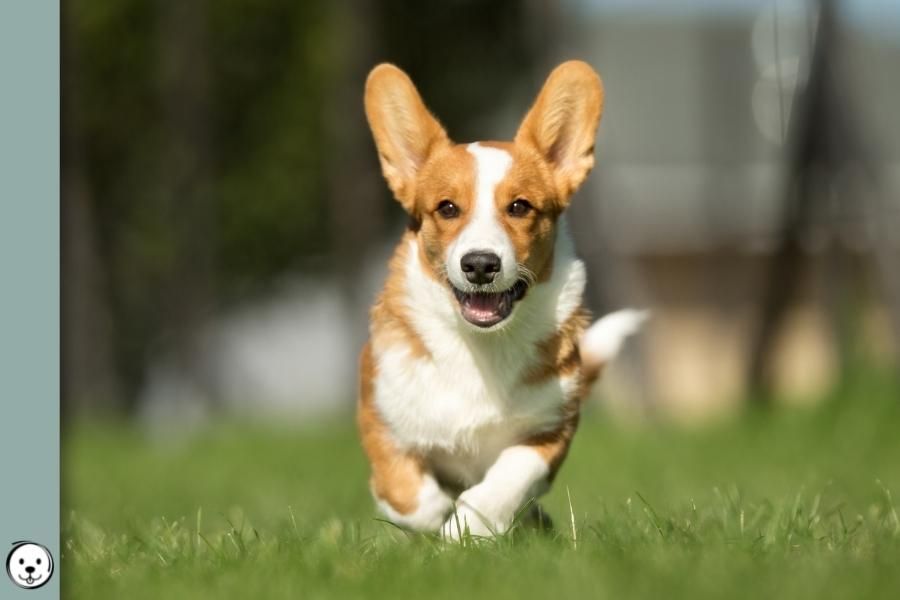 Dominant yellow (also known as clear sable or fawn) describes a phenotype with a white, yellow or red base color in all pigmented areas and little to no dark-tipped hairs.

What is Dominant Yellow?

Dogs with a dominant yellow have a solid white, yellow or red coat in all pigmented areas. In contrast to a shaded yellow pattern a dominant yellow dog has very little or no dark shading (meaning coat with dark hair tips).

Minimal amounts of black hair tips can often still be found on the ears, the back or on the violet gland located on the upper surface of the tail.

Puppies are often born with more shading but will fade to clear sable by the time they get their adult coat.

Clear Sable can hide coat colors and patterns that need some eumelanin to be visible (e.g. merle, greying, liver, dilution). But clear sable dogs can still display brindle, masks or countershading depending on their genotype.

Btw, melanistic masks can sometimes cause more shading than expected even on a dominant yellow dog.

Some solid dominant yellow dogs can resemble dogs with a recessive red coat since both phenotypes don’t express eumelanin.

In any case, a recessive red dog can not have a single black hair even as a puppy while a dominant yellow still has the ability to express some eumelanin.

The A-Locus is part of the canine pigment type switch. It controls when and where phaeomelanin is produced. Different alleles at this locus cause a variety of different patterns.

Until recently genetic testing could only determine if a dog was yellow with or without shading. Both versions were simply called sable (Ay) with Ay being the most dominant of alleles (Ay>aw>at>a). But there was no way of predicting the amount of shading in a sable dog’s coat.

Newer research makes it possible to distinguish between six different phenotypes, but the nomenclature of the newly characterized alleles at the A-Locus is not yet consistent between publications:

Dominant yellow (ASIPDY or Ay) is the most dominant trait at the A-Locus.

It is caused by a particular combination of two newly described regions inside the ASIP gene[1]:

The wild type of the ventral promotor (VP) produces clear phaeomelanin-pigmented areas without any banding on the dog’s muzzle, eyebrows, chest, belly, lower legs and under the tail (VP2).

But in clear sable dogs, we find a more active version of this ventral promotor (VP1) with increased expression of phaeomelanin that can make clear tan markings on the dog’s underside bigger than usual.

This combination or haplotype (VP1-HCP1) represents the new dominant yellow allele Ay. Other haplotypes represent other alleles (see the A-Locus for more info).

Ay is the most dominant trait in this allelic series meaning dogs with an Ay/- genotype can be carriers for any other A-Locus variant, e.g. Ay/at.

We now know that dogs with clear sable can carry and produce shaded sable if they are Ay/Ays. The old testing system would have reported Ay/Ay for this combination and shading carriers could not be detected!

Clear sable is characterized by a solid or almost solid phaeomelanin-pigmented coat. This leaves not too much room for all patterns involving eumelanin to express.

Puppies can have a moderate amount of dark hair tips that will in many cases fade when changing into their adult coat.

The base color of a dominant yellow dog will have whatever color intensity of phaeomelanin he can produce. There are different factors involved that can change pigment density in a particular dog’s coat.

Phaeomelanin can express any shade in the range from white, cream, yellow, orange up to red. It’s pretty normal to see some variation of color on the same dog, e.g. it is pretty common to have denser pigment on the ears.

Phaeomelanin is only used to give color to a dog’s coat. Skin, eye rims, lips, nails and nose get their color from eumelanin.

So a dog that is genetically black will have a black nose black skin pigment. Other loci (see the B-Locus and D-Locus) can change the shade of a dog’s eumelanin to liver, blue or lilac.

Since there is hardly any eumelanin in a dominant yellow dog’s coat you will have to look at his nose pigment to see which color his eumelanin would have had.

But even very small amounts of dark hair tips can give dogs a brown. blue or mouse grey overcast. Dogs with brown-based clear sable can be found in Dogue de Bordeaux or in some Rhodesian Ridgebacks.

Lilac-based clear sable gives barely any contrast and is quite rare since very few breeds have both brown (b/b) and dilution (d/d). The best chance to spot one might be some color-bred designer dogs, I guess.

A melanistic mask is caused by Em/- at the E-Locus. Masks add eumelanin on a dog’s muzzle but can extend beyond a dog’s face and give more shading to any yellow coat than expected.

Masks can occur together with brindle and can by themselves add some or lots of eumelanin to a dominant yellow dog.

Brindle is caused by the kbr allele at the K-Locus. It adds stripes of eumelanin to any phaeomelanin-pigmented areas. So on a dominant yellow dog, all pigmented areas will display brindle striping.

There are many possible variations of brindle, it can give a minimal or pretty dense pattern which can turn a dog’s coat very dark.

The dark stripes in a brindle pattern get their color from eumelanin. This can make patterns like merle, greying or the color of a dog’s eumelanin visible in the coat.

White spotting occurs in areas without proper pigment production during hair growth. White coat can hide whatever pattern a dog would have expressed in this spot.

An interesting thing sometimes happens in dogs that combine sable, white spotting and melanistic masks. Black pigment inside the sable patches seems to pool at the borders of the color patch and creates an interesting pattern called watermarking or etching.

Ticking and roan give some color back to areas with white spotting. In affected dogs, little spots or hairs with normal pigment start to grow in white areas soon after birth.

These hairs or spots will have exactly the color a dog would have expressed in their location if it wasn’t for white spotting. And believe it or not, this is the normal pattern for Red Heelers!

In some dog breeds, sable expresses with a lighter underside which can give a dominant yellow dog a very patterned look. But the mechanisms behind countershading are a mystery for now.

Interestingly, countershading usually appears in the areas where traditional tan markings would appear. So on the belly, lower legs, throat, cheeks, eyebrows and under the tail.

In some Asian spitz breeds like Shiba or Akita Inu, these lighter markings are called Urajiro. They can get very light and form a very crisp pattern.

Clear sable can in many cases hide patterns that need some eumelanin to be visible.

Since this includes merle patterns breeders should be cautious to not accidentally assume a clear sable was non-merle because he looks that way!

Oftentimes even dominant yellow dogs show some puppy shading. This little bit of eumelanin in young puppies can make merle faintly visible for a short amount of time before it eventually disappears.

Dominant yellow is present in many breeds, sometimes together with shaded sable and other patterns (e.g. Belgian Malinois are shaded or clear sable; Shelties are clear sable, shaded sable or tricolor).

Here are some examples of dog breeds that can under the right circumstances have dominant yellow[1]: