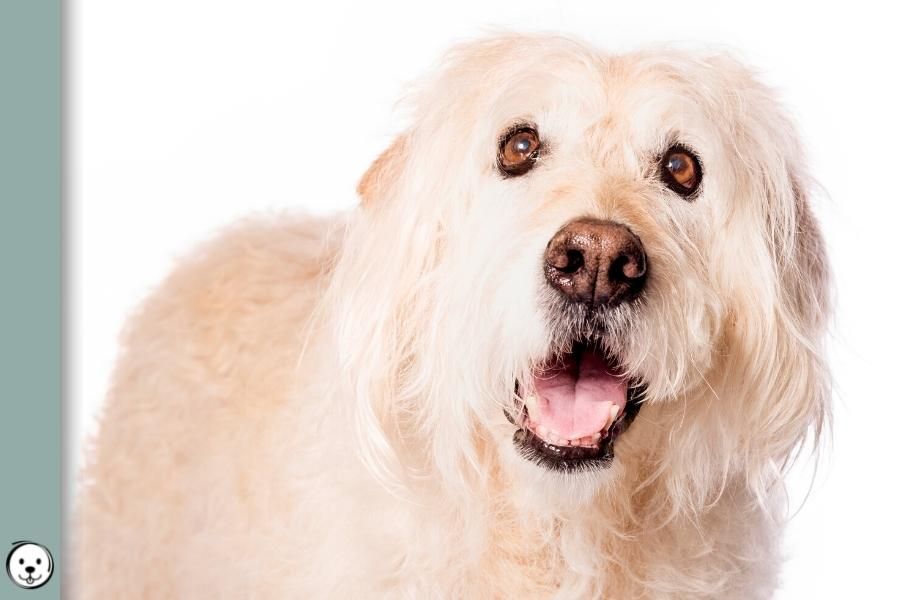 Recessive red (ee) causes a dog to only produce phaeomelanin in all pigmented areas. Since the color intensity ranges from white up to yellow, orange and red this causes a variety of phenotypes. Many dog breeds with solid white, yellow or red coats are in fact ee-red.

What is Recessive Red?

But in recessive red dogs, a non-functional gene variant at the E-Locus keeps pigment cells from ever receiving the signal they need to switch from phaeomelanin to eumelanin production.

What you get is a dog that can only produce phaeomelanin in all pigmented areas.

This gives recessive red the ability to mask any other color or pigment pattern that needs eumelanin to express normally. So the E-Locus has epistatic control over other coat color genes.

But it’s impossible to see what genotype a recessive red dog actually has at his other loci since all these coat color patterns would need eumelanin to be visible in the phenotype.

By the way, the same is true for very clear sable (and some domino phenotypes in sighthounds or northern breeds) which all can easily be confused with recessive red dogs.

In most cases, we can guess what color a dog’s eumelanin would have had since eumelanin still is responsible for the color of lips, eye rims, skin and nail pigment.

Typical signs on a recessive red dog are white whiskers and fading nose pigment which is often called snow nose.

But affected dogs can actually have coat colors in the range between all white, ivory, cream up to yellow, orange or red depending on what color intensity a particular dog can express.

The MC1R gene at the E-locus contains the building plan for the Melanocortin 1 receptor found in the membrane of pigment cells. This receptor plays a central role in pigment type switching.

Pigment cells by default produce phaeomelanin but can be ordered to produce eumelanin.

The mutated e allele lost the ability to detect the signal that triggers the switch from phaeomelanin to eumelanin production. So the pigment cells of an MC1R deficient dog can only ever produce phaeomelanin.

The e allele is a loss-of-function variant. It is the most recessive trait at the E-Locus hence the name recessive red. We currently know of three different mutations (e1, e2, e3) that all cause a loss of function at the E-Locus and produce the same phenotype.

The e1 variant is most common and found in many different dog breeds while e2 and e3 are rare breed-specific variants[2,4]. The e2 variant was found in cream-coloured Australian Cattle Dogs and e3 was found in white Alaskan Huskies and Siberian Huskies[4].

Only dogs that have at least one working copy of any other allele at the E-Locus are able to express both pigment types. But all black or patterned dogs could be carriers (Em/e, E/e, eA/e, eG/e, eH/e) and produce recessive red with the right partner.

When testing you should consider your dog’s breed background since not all labs test for all variants (e1-3) and sometimes report a false negative result. Since it’s impossible to know what a recessive red dog’s genotype has to offer genetic testing is in any case highly recommended if you want to breed.

This is especially true if merle is involved since recessive red masks any merle phenotype.

Recessive red causes a mostly uniform coloration in all pigmented areas. An affected dog can’t express any pattern that would require at least some eumelanin.

If a dog has black shading or had black shading as a puppy or if he has at least some black hair tips along the back, on the ears or his tail, he is not recessive red.

But even truly recessive red dogs can still show a variety of different phenotypes.

They can have white, yellow or red pigment, show white spotting with or without ticking or roan and can have different nose and eye colors.

Phaeomelanin intensity varies from white, ivory and cream colors up to golden, yellow and blond, it can even be orange-red or express as rich red or chestnut color.

Color intensity can be modified by selective breeding, e.g. Labs and Goldens used to be yellow and golden but got lighter and lighter due to higher demand for cream-colored dogs[5].

All these colors from very diluted red up to intense red are caused by different amounts of phaeomelanin in the hair. But for now, we can only explain only some of the genetics behind phaeomelanin intensity[7].

It’s normal to see different shades of red on the same dog depending on hair length or amount of undercoat. Especially on lighter dogs, the ears or around the edges of the ear (also called ear lacing) can be a little darker than the rest of the dog.

And there can be some countershading with a lighter shade on the dog’s belly, chest and throat. This is usually best visible in longhaired breeds but less pronounced and without crisp light facial markings compared to countershading in agouti gene patterns.

Since lips, eye rims and nose leather get their color from eumelanin they are either black, brown, blue or lilac.

Eye colors vary from brown in black-nosed dogs to amber in liver-nosed dogs and yellow-green in blue and lilac dogs.

The name may hint at the seasonal color change that can often be seen on affected dogs. Possibly due to sun exposure, the nose can sometimes get darker over time and soon again fade to a greyish taupe or pink.

A snow nose is more pronounced in dogs with brown eumelanin pigment.

This seems to be the reason for yellow Labrador Retrievers with brown nose pigment not to be a standard color since they can get a very brownish pink dudley nose.

White spotting is found in areas that don’t produce any pigment. So a yellow or red dog can absolutely be piebald or have irish spotting.

An interesting aspect of this is that every dog with white phaeomelanin can also express piebald without it being obvious from just looking at the coat. We simply can’t see white color patches on white non-pigmented background since the contrast between these areas is so low.

Some all-white breeds that can also be piebald are American Eskimo Dog, Bichon Frisé, Bolognese, Maremma Sheepdog, Maltese or Samoyed[3].

Since pigment deletion in a truly white coat can cause blue eyes or even deafness breeders of these breeds obviously bred away from too much hidden piebald a long time ago.

Recessive red dogs with white spotting can express ticking or roan inside their real white markings.

Puppies are born with solid white patches that express ticking or roan sometime later. Spots fill in over the course of a few months and express the same color which would have been visible at their location without the white spotting (e.g. on an actually solid yellow dog all spots will be yellow).

Fun Fact: In some rarer cases the spots fill in with a darker pigment intensity than seen on the surrounding colored patches. Compare these Cocker Spaniels:

Here are some examples of dog breeds that are fixed for an e/e genotype:

Uniform white, apricot, yellow or red coloration is a standard color in many more breeds and sometimes even the most common color[3]: