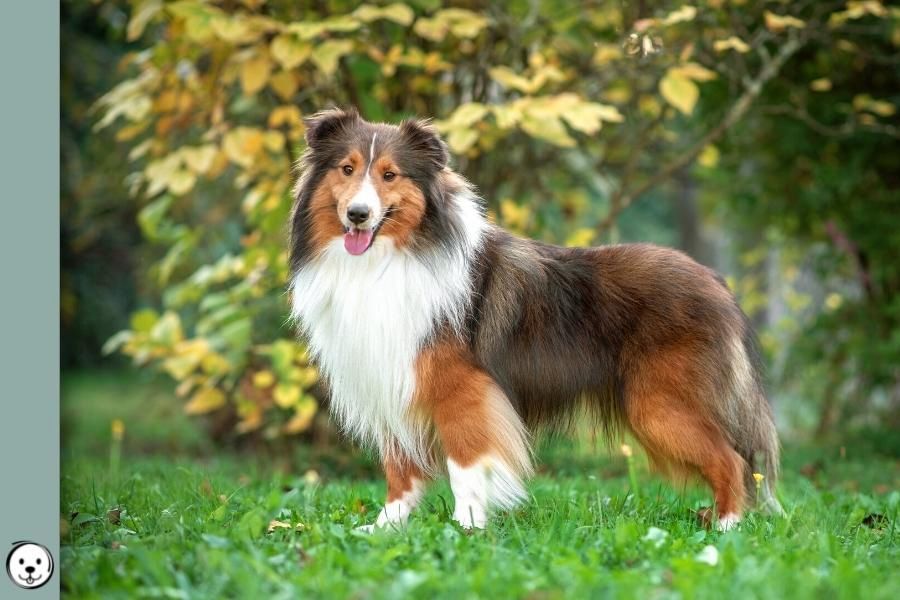 A dog is shaded yellow or shaded sable when he has a white, yellow or red base coat with dark-tipped hair ins some areas. Sable shading is concentrated mostly on the dog’s back and often causes a widow’s peak on the forehead.

What is Shaded Yellow?

Shaded yellow or shaded sable describes a coat with a white, yellow or red base color and hair with dark tips. The expression of dark-tipped hairs is called sabling or shading.

Areas with dark pigment are commonly found on their shoulders, back, neck or tail and the face, chest and lower show lower amounts of eumelanin. But the amount of shading can be extended in dogs with a black mask and on average is greater in puppy coat.

Many dogs with sable shading display a widow’s peak on their forehead.

Until recently there was no accurate way of predicting if a sable pattern would have dark shading or not, both phenotypes were considered as variations of sable (Ay).

The genetics of shaded yellow or shaded sable have only been understood recently. The name shaded yellow was chosen to distinguish this pattern from a dominant yellow phenotype.

The difference between clear and shaded sable is the amount of eumelanin-tipped hairs.

While a dominant yellow dog has an almost solid coat color a shaded yellow dog has considerable amounts of dark pigment seen in the hair tips on his neck, ears or back.

The A-Locus promotes phaeomelanin production at the expense of eumelanin in bicolored pigment patterns.

For a long time, we only knew four different alleles at the A-Locus: Ay (Sable) > aw (Agouti) > at (tan point) > a (recessive black). And for many breeds, this system still works pretty well and is about as much as breeders need to know.

But in some dogs, this old testing system lacked some necessary information to predict all coat patterns. And sable shading was one of those things that could not be predicted previously.

Shaded sable (ASIPSY or Ays) is the second-most dominant trait at the A-Locus.

It is caused by a particular combination of two newly described regions inside the ASIP gene:

The wild type version of the ventral promotor (VP) produces clear phaeomelanin-pigmented areas without any banding on the dog’s muzzle, eyebrows, chest, belly, lower legs and under the tail (VP2). The more active version would cause more phaeomelanin as seen in dominant yellow dogs (VP1).

But a more active variant (HCP1) shifts the banding pattern towards phaeomelanin production. This causes coat with dark-tipped hairs instead of multi-banded hairs.

This combination or haplotype (VP2-HCP1) represents the new dominant yellow allele Ays. Other haplotypes represent other alleles (see the A-Locus for more info).

Ays is the second-most dominant trait in this allelic series meaning dogs with an Ays/- genotype can be carriers for many other A-Locus variants, e.g. Ays/at.

But according to the new allelic hierarchy, a shaded yellow dog can not produce a dominant yellow one. The old testing can not distinguish between these patterns, both will be reported as Ay/Ay.

Puppies for some reason express more eumelanin as they will usually keep in their adult coat. Dogs with a shaded yellow coat are often born with an almost black coat.

As youngsters, they can go through a very paler phase until some amount of shading returns.

Adult shaded sable dogs often have a widow’s peak on their forehead that ends above or between the eyes. In contrast to other patterns, black shading rarely extends along the ridge of the nose.

Since shaded yellow coat contains a noticeable amount of eumelanin any phenotype affecting eumelanin might be visible, e.g. sable merle or greying.

Darker hair tips typically appear on the dog’s ears, neck, back and tail. But a shaded yellow coat can have a large or small amount of sabling. Dogs with less amount of shading are sometimes called tipped sable.

Melanistic masks are known to sometimes extend the amount of shading.

Some heterozygous combinations at the A-Locus are known to behave incomplete dominant.

A shaded yellow dog that carries tan point (Ays/at) or recessive black (Ays/a) might have a darker coat than a homozygous dog (Ays/Ays).

And of course, coat length and coat texture can also have an influence on how dark a dog looks.

The base color provided by phaeomelanin can range from white to yellow up to red. There are different factors that control phaeomelanin intensity.

In shaded yellow dogs different base colors can result in certain phenotypes being described as silver, cream, red, etc.

Nose, eye rims, lips or nails as well as the dark tips in all shaded areas get their color from eumelanin.

The wild type color of eumelanin is black and the majority of dog breeds express black-based shaded sable.

A homozygous recessive combination at the B-Locus (b/b) can turn all black pigment to brown. This affects all the eumelanin on a dog, so the nose and skin pigment will also be brown. Typically brown dogs also have greenish puppy eyes and amber eyes as adults.

Brown-based shaded sable may not be as obvious as black-based sable since there may be little contrast between brown hair tips and let’s say a red base color.

If a dog can produce black pigment (B/-) but is homozygous recessive for color dilution at the D-Locus (d/d) all black pigment will turn to a blue, grey or slate color.

This turns all dark hair tips, skin pigment and the nose leather blue and typically causes a yellow-greenish eye color.

A blue-based shaded sable can have a very distinct and shiny look caused by the blue overcast on his back.

Just as black pigment can be turned blue by color dilution, brown will turn to isabella/lilac. But since lilac hair tips barely give any contrast it can be difficult to spot this pattern.

Brindle (kbr/-) adds dark stripes on any phaeomelanin-pigmented coat. Depending on a dog’s B-Locus and D-Locus all brindle stripes will be black, blue, brown or lilac.

A melanistic mask (Em/-) adds eumelanin to a dog’s muzzle or face. Sometimes masks grow even bigger and can cause more dark shading than expected.

Some examples of dog breeds that can have masks and shaded sable are Belgian Sheepdogs, Leonberger, Papillon or Borzoi.

Traits like piebald, whitehead or irish spotting can cause white patches without any pigment. Think of these patches as an overlay that can hide a dog’s coat color or pattern in some places.

In some dogs the areas that were white at birth can get some of their color back. Over time little fully pigmented dots or a portion of single hairs will grow inside the white markings.

These phenomena are called ticking or roan. They produce exactly the color one would have expected in their place if the dog hadn’t been white.

Merle deletes some pigmented in all eumelanin-colored areas and has barely any effect on any solid yellow coat. To be visible a dog must have at least some eumelanin.

Since a shaded yellow dog can have a large amount of black-tipped hairs on his back this can make the space for merle to work just big enough to become visible.

Producing sable merle is discouraged in most breeds that have both traits since there is always the risk of accidentally producing a dog with hidden merle.

This in turn creates a risk when breeding such a “non-merle looking dog” to another merle and creating double merle. We highly recommend M-Locus testing whenever breeding with merle to reduce an easily avoidable risk.

Progressive greying causes a rapidly fading of eumelanin pigment and is usually only visible in dogs with a longer coat. There it turns black and blue eumelanin to grey or silver and brown or lilac pigment to beige or whitish beige.

Since this only works on eumelanin it only affects the darker shaded areas.

Countershading causes lighter markings on the dog’s underside, chest, throat, muzzle, eyebrows and under the tail. It can give a somewhat smooth color transition from ventral to dorsal areas.

In some breeds, the lighter markings turn almost white and have very defined edges. Countershading is called urajiro in some asian spitz breeds known for their often very distinct version of countershading.

Domino alleles like ancient domino and grizzle reduce the amount and spread of eumelanin and lighten the intensity of phaeomelanin in any pattern.

In dogs that are genetically shaded sable, it can delete most or all of the dark shading and give the dog a uniform cream or pale yellow look. In sighthound breeds like Saluki, this is called newsprint cream.

Shaded yellow is a very common pattern and is found in many breeds[1]: