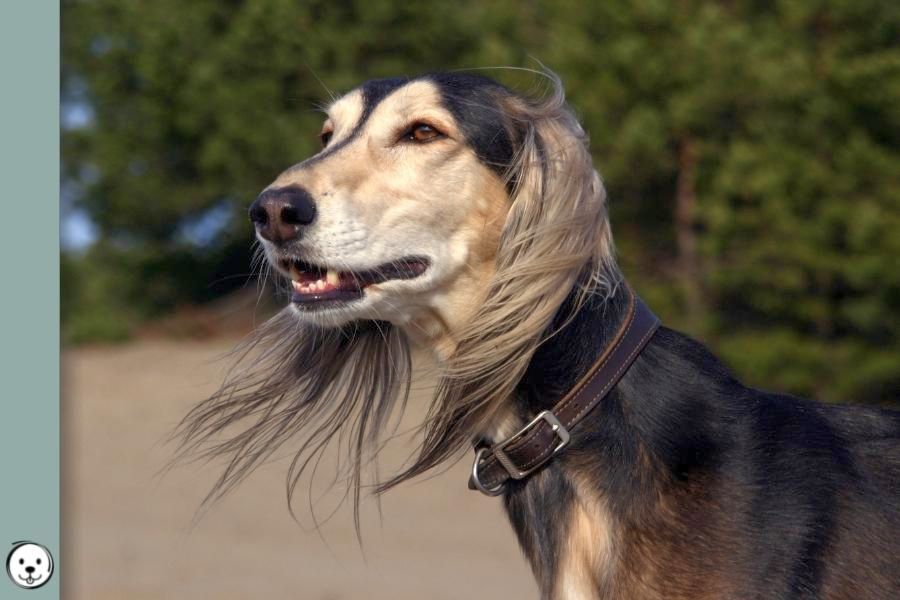 The eG allele at the E-Locus modifies any regular coat color pattern by reducing eumelanin and increasing phaeomelanin production. This causes different new phenotypes mainly found in sighthound breeds where it is mostly known as grizzle or domino.

What is Domino or Grizzle in Sighthounds?

The resulting phenotypes go by various breed-specific names like grizzle, domino, chinchilla, etc… In Salukis it is known as grizzle and in Afghan Hounds it was named after a famous show dog of the 1950s named Tanjores Domino.

Grizzle domino affects any pattern caused by a dog’s K-Locus and A-Locus. The variant eG is considered one of the rarest trait-associated variants in dogs[1,2].

It basically changes almost all known patterns, but the resulting phenotype varies greatly depending on what pattern a dog would normally have had.

Similar to northern domino grizzle also reduces dark shading and dark hair banding in any given pattern. It turns all areas pigmented by eumelanin smaller and causes pale undercoat, white whiskers and pale hair roots. Tan markings typically fade to a lighter color and get bigger than expected.

Dominant black (eG/- KB/-) dogs turn greyish and express some of their normally masked agouti gene pattern. Brindle striping (eG/- kbr/-) fades to some degree and turns up in different areas than expected. And any other pattern like shaded sable, agouti, saddle pattern or tan point is expressed with a reduced ratio of eumelanin to phaeomelanin.

Grizzle patterns can sometimes be hard to pinpoint since pattern expression and effects vary greatly between dogs. Additionally, some patterns can easily be confused with regular shaded sable or creeping tan.

The E-Locus is part of the mechanism that tells pigment cells what pigment type they should produce. The K-Locus and A-Locus depend on a working E-Locus to express in a regular manner.

Grizzle is caused by the eGrizzle allele which is a reduced-function variant of the Extension gene. Grizzle domino eG does not inhibit all eumelanin synthesis like recessive red (ee), but it greatly reduces the amount of eumelanin expressed in any pattern.

The authors of the original study describing this new allele put “EG“ over E in the dominance theory of the E-Locus series (“Em>EG>E>e”). They also came to the false conclusion that grizzle might only work on tan points [1]. Both of these statements have been proven untrue many times by now but unfortunately are still repeated all over the internet.

Since eG is recessive to mask and wild type some dogs can carry grizzle without expressing it (Em/eG, E/eG). However, the wild type allele is known to probably only have an incomplete dominant effect over eG.

Heterozygous dogs expressing the wild type (E/eG) may show indicators like larger than normal tan points, extreme fading from puppy to adult coat or less than normal eumelanin that a dog indeed carries a domino allele.

But an obvious grizzle domino pattern is only expressed in dogs that are either eG/eG or eG/e. Some breeders think that maybe eG/e might cause an even paler coat than eG/eG implying an incomplete dominant relationship between eG and e.

Combinations like eG/eA or eG/eH are extremely rare, so there is hardly any information on the interaction between different domino alleles[3].

Since eG affects many sighthound breeds we have a good basic understanding of the effect of grizzle on typical sighthound colors.

Many colors (e.g. liver) or color patterns (e.g. merle, recessive black) are less common or simply don’t exist in sighthounds. So some combinations like grizzle merle or liver grizzle are very rare.

On a dominant black dog who is genotypically tan point (eG/- KB/- at/-) this often causes a shaded grizzle phenotype with a dark overlay on the top and a lighter underside.

Brindle adds dark stripes of eumelanin in all areas pigmented by phaeomelanin.

So on a sable coated dog (eG/- kbr/- Ay/-) the whole coat should be striped while on a tan point pattern stripes would only be visible in the tan markings (aka brindle point).

Since eG decreases eumelanin production the extent of striping in most brindle domino patterns will be reduced. The remaining stripes will sometimes fade to some pale smudges.

On brindle point patterns (eG/- kbr/- at/-) grizzle domino causes the otherwise black coat areas to express some phaeomelanin. This makes brindle striping visible on a dog’s back and flanks.

Simultaneously eG often deletes striping from the face and the lower legs where brindle would normally be expressed on a tan point brindle!

Grizzle removes eumelanin from any coat pattern and can remove some or all dark shading from a sable coat.

In combination with lighter phaeomelanin and pale undercoat, the eG effects can add up to create a very light and purely cream or yellow coat.

Not many sighthounds with eG in their breed also come in agouti. While northern domino is often combined with aw in sighthounds this is a rather rare combination.

Agouti grizzle is sometimes seen in Chart Polski or Taigan.

It causes a widow’s peak and a grizzled phenotype with reduced dark hair banding looking a lot like a regular shaded sable. Some of these dogs have light facial markings with some black coat under the eyes. Dogs can also sometimes have a darker nose bar between forehead and nose leather.

In dogs with a saddle pattern, the dark saddle can get very small or even be reduced to only some darker hairs on the back of the dog.

This is one of the most common grizzle domino phenotypes. Typically it is expressed as a pale face with a widow’s peak or dark nose bar and pale coat on the dog’s underside and darker banded coat on the dog’s back.

A tan point pattern with grizzle (eG/- ky/ky at/-) will cause lighter and bigger tan points and create large pale facial markings characteristic for the grizzle phenotype.

This pattern can resemble lightly shaded sable or stay quite dark with only some lighter undercoat and some phaeomelanin expression. In some dogs, this phenotype is even called silver sable, golden sable, etc.

In most dogs pointed grizzle creates a very yellow-greyish and shaded look with a dark overlay on paler than average phaeomelanin.

But in some dogs phaeomelanin will not fade to cream or yellow. Grizzle with normal phaeomelanin expression is sometimes called red domino, red grizzle or deer grizzle.

Grizzle domino is common in some closely related sighthound breeds. It was also confirmed in some other dog breeds that mostly originate from Asia or the Middle East[2]:

In some other breeds, the eG variant occurs at a very low frequency and cases of dogs actually expressing a grizzle domino pattern should be very rare[2]: