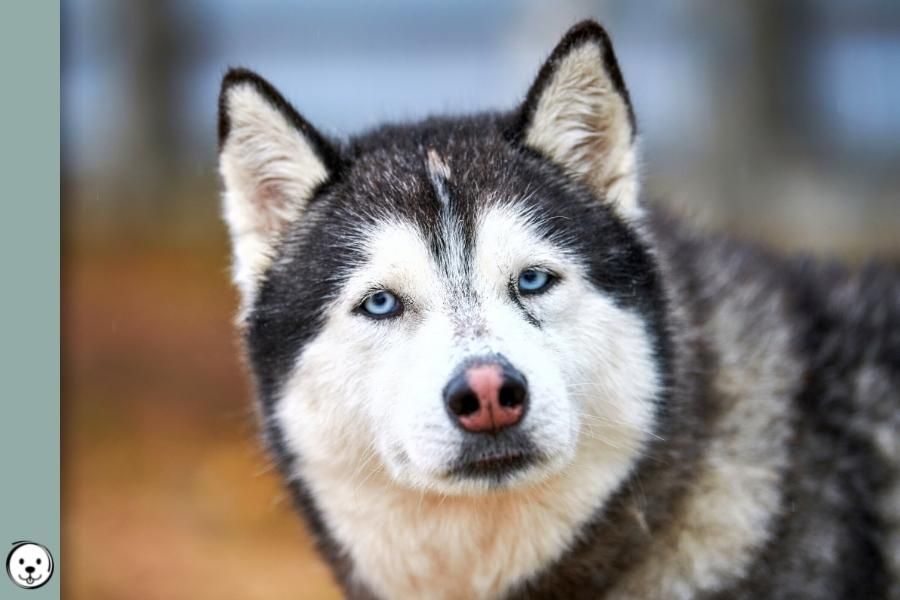 The recently discovered eA allele at the E-Locus is responsible for a particular phenotype with reduced eumelanin production and increased pheomelanin expression. In northern breeds this is called northern domino, but in other breeds this is known as pied or grizzle.

What is Ancient Domino?

Domino modifies whatever pattern a particular dog can express depending on his K-Locus and A-Locus. Domino has an effect on all patterns, but the actual phenotype depends on what a dog would have expressed if he wasn’t domino.

Dominant black dogs (KB/-) without domino have solid coloration in all pigmented areas. But with domino (eA/- KB/-) some of their otherwise masked A-Locus pattern may become visible.

On brindle patterns (eA/- kbr/-) domino can fade brindle striping or make brindle visible in areas that should normally be solid black.

Domino typically removes shading from sable and agouti patterns, banded coat will have a light base and only a dark hair tip. It modifies tan points to become large and very light in color.

And even recessive black dogs that are also domino will suddenly express some phaeomelanin in their coat often with smutty tan point-like markings.

The E-Locus is part of the system that tells pigment cells what type of pigment they should produce (this is called the pigment type switch). Different alleles at the E-Locus influence how much eumelanin will be produced in different coat patterns.

Domino is a reduced-function mutation that can be described as partial recessive red. While true recessive red inhibits all eumelanin production, domino only reduces the amount of eumelanin in a given pattern.

The newly discovered variant eAncient Red is responsible for different phenotypes with lesser than expected eumelanin in a variety of dog breeds. Why ancient? Well, this allele was found in 10.000-year-old dog remains[2]. But some texts refer to this allele simply as eD as in eDomino.

Ancient domino (eA) is (incomplete) recessive to melanistic mask (Em) and wild type (E) but (incomplete) dominant to recessive yellow (e). Its interaction with other domino alleles (eG, eH) is not yet understood.

Any masked or normally pigmented dog could be a carrier of ancient domino (Em/eA, E/eA). There are even some examples of E/eA Ay/- dogs that are born with dark sable puppy coats but then fade to a very light pattern. This implies an incomplete dominant interaction between E and eA.

But a full ancient domino pattern is only expressed in dogs that are eA/eA or eA/e. It is again possible that this trait is incomplete dominant in relation to e. So eA/e might give an overall lighter pattern than eA/eA or not[1].

The effect of ancient domino combined with other domino alleles (eA/eG, eA/eH) is unknown since such pairings are very rare[1].

eA impacts all phenotypes regulated by the K-Locus and A-Locus.

Domino decreases the amount of eumelanin in any coat pattern. It often also turns a dog’s whiskers, hair roots and undercoat white and creates a prominent vertical pink stripe on the nose.

But ancient domino gives very different phenotypes depending on the actual background it works on. Even in affected dogs, its expression varies from very minimal to very obvious.

There might be some overlap between different patterns, e.g. a very light tan point domino and a dark agouti domino.

And in some cases it can be surprisingly hard to distinguish between domino patterns and some other patterns, e.g. in some circumstances, domino can resemble regular recessive red, sable, tan point or wolfgrey[1].

In addition, countershading creates a lighter underside on all red coat areas and can make a sabled dog resemble a tan point domino by creating very light facial markings.

In a dominant black dog, you normally would expect a solid coloration in all pigmented areas. But domino downregulates the K-Locus and the A-Locus pattern becomes visible to some degree.

Domino combined with KB and Ay or Ays (clear sable or shaded sable) causes the coat to turn a greyish color or can resemble a sable pattern with some grey overlay at the back.

Domino combined with KB and aw (agouti) will most likely look like an agouti pattern with lighter hair banding.

Domino with KB and at (tan points) or asa (saddle pattern) often expresses with a smutty greyish overcast on all areas that would normally be red in these patterns.

A reader suggested some dogs with domino + dominant black + tan points (eA/- KB/- at/-) might be hard to tell apart from some E/- ky/ky at/a phenotypes which often causes small-ish smutty points.

Brindle normally causes a variegated striping pattern by alternating between eumelanin and phaeomelanin expression. Since brindle (kbr) is not that common in breeds affected by ancient domino this phenotype is not as common as in sighthound domino phenotypes (eG).

Domino reduces eumelanin and masks the K-Locus in any pattern. Even brindle striping will turn less distinct and domino brindles have way less or no striping especially on the lower legs or on the face.

In sable brindle domino any remaining stripes often fade to grey. And in brindlepointed (brindle + tan point) some striping may suddenly appear outside of the tan points and on the dog’s black mantle instead.

Since domino reduces the amount of eumelanin it can turn any sable pattern into a solid yellow coat with minimal to no shading. This domino phenotype resembles clear sable or even recessive red and is sometimes called fawn domino or cream domino.

Since puppy coats in sable dogs can be way darker than in adult coats some dark sable shading or pale facial pattern may still be visible at birth and fade out later on.

The study that described the eA allele mentioned that this interesting phenotype is found rather often in Drever and Cirneco dell’Etna[1].

Domino agouti is one of the most common phenotypes in some northern breeds. It gives light facial markings typical for Siberian Husky or Alaskan Malamute.

This pattern often has a widow’s peak and can resemble a regular shaded sable, but some dogs also express a dark nose bar. One distinctive feature in many domino agouti dogs is a little bit of residual spectacle pattern with some rest of the black shading under the eyes.

Domino removes dark hair banding from the agouti pattern and lightens phaeomelanin. This often creates a pale coat with a paler hair base and dark hair tips.

Domino causes saddles to shrink up to the point where they only consists of some black hairs and are barely noticeable anymore.

In Beagles the combination of domino and saddle pattern creates a phenotype with a very minimal saddle called “pied“.

The pairing of domino with a tan point pattern creates one of the more common domino phenotypes.

Tan point domino creates pale facial markings with a widow’s peak and a dark nose bar running from the forehead not all the way to the nose leather.

The pale coat with darker hair tips can look like a shaded sable. Sometimes the darker areas on the dog’s back get small enough to look like creeping tan on a non-domino dog.

Recessive black should turn the coat a solid color in all pigmented areas. This is caused by a loss of function variant that lost its ability to promote phaeomelanin production.

But the eA allele seems to restore some functionality of the a allele. This regained function causes a patterned phenotype with smutty tan markings or a dark agouti-like pattern with pale undercoat and red to cream markings.

Yes, domino can even modify a merle pattern!

Beautiful Suri of Josephine Lange in Germany probably (probably Mh/m ky/ky at/at eA/e) is one of the rare examples of a tan point domino merle.

Ancient Domino is common in many northern and spitz-type breeds. But it was found in lots of other types of dog breeds[1]: