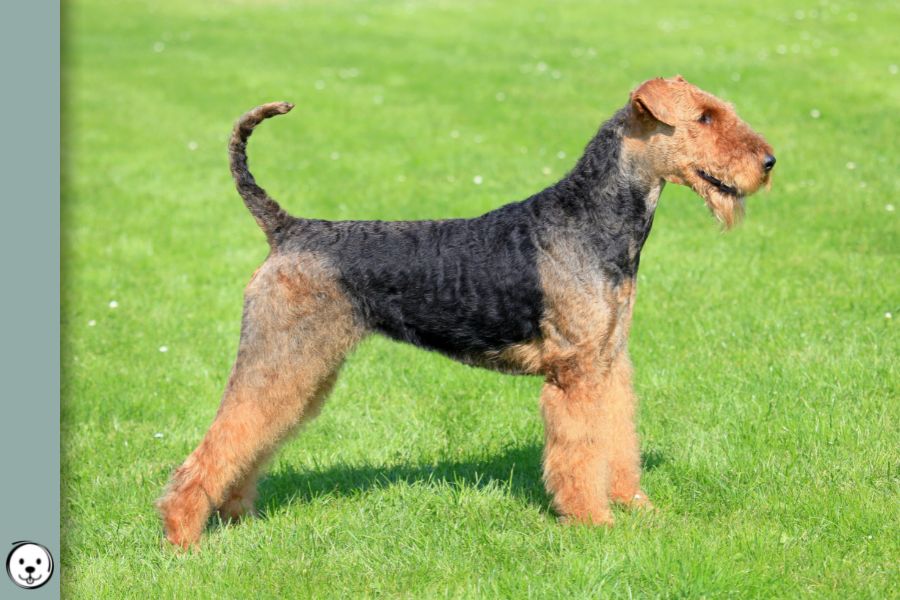 The Airedale Terrier is a medium-sized wirehaired terrier with a characteristic saddle pattern. But the “King of the Terriers” is born with a tan points pattern and develops its saddle pattern later.

Let’s have a closer look at the different Airedale Terrier color patterns:

Airedale Terriers have a classic black and tan saddle pattern.

Like all dogs with a saddle Airedale puppies are born almost black with small tan markings.

Over time the tan areas get larger until black coat is only found at the sides and upper parts of the dog’s back, up the dogs neck and on the top of the tail. Some dogs have black shoulders or thighs which is considered undesirable.

The saddle can be jet black or have some or many red hairs sprinkled in. Red shading inside the saddle can get very extensive which is sometimes confused with a “grizzle” coat (a separate trait in Airedales).

Some dogs keep some dark shading on the side of the skull, around the neck or on their ears.

Head, ears, shoulders, legs, thighs, elbows and underside of the body are tan-colored. The tan markings in Airedale Terriers have the color of autumn leaves and range from orangey beige to golden yellow.

White markings are not desirable but some lines of Airedales have a characteristic small white patch on the chest. White toes or a few white hairs between forelegs can occur in every puppy and often disappear over time.

Some Airedales don’t have a jet black saddle but instead look hoary and greyish. This blend of grey, black and white hairs is called grizzle in terrier breeds. Nowadays grizzle coat seems to be rare in Airedales.

A grizzle-and-tan Airedale Terrier gets its faded saddle from progressive greying. Less and less pigment is produced in growing hairs turning them grey or white. Interestingly, this is only observed in bearded dog breeds.

Grizzle puppies are born with full black pigment and a tan point pattern. But in this case, the color intensity of the black coat fades as the saddle shrinks leaving a grey saddle.

Just like dogs with a black saddle some dogs with a grizzle pattern have varying degrees of tan hairs growing inside their saddle. And they also can have small white markings on the chest or toes.

But not every greyish coat in Airedales seems to be truly grizzle! Faded color is sometimes attributed to neutering, old coat overripe for trimming or inappropriate coat care like clipping.

All Airedale Terriers have a saddle pattern. An interesting thing about saddle tan is that these dogs are born with a traditional tan point pattern with only small tan markings.

But over time the black coat areas shrink while the tan keeps growing and creeping forward. It can take up to 24 months for the final pattern to be achieved.

So Airedale puppies and youngsters at different stages might still have some dark shading on their face, legs or ears.

Non-standard colors can happen in any dog breed. Most breeders try to avoid them but others may breed them on purpose for various reasons despite being considered undesirable.

Sometimes these non-standard colors occur by accident due to recessive alleles. Recessive traits like liver or diluted color can be carried and passed on for many generations. They will only ever be expressed in dogs that inherited a copy from each of their parents.

But in other cases, a non-standard color might be achieved by crossbreeding and introducing these non-standard traits on purpose.

Airedale Terriers are bred as pets and for show purposes. Deviations from accepted patterns like a too large or too minimal saddle happen only very rarely.

Some purebred dogs with too many red hairs inside their black saddle can look almost red or resemble dark sable. But in solid red Airedales there seem to be different things going on.

Red Airedale Terriers are a non-standard coloration bred on purpose and marketed as rare color by some breeders.

These red dogs seem to ge their color either by truly being clear sable like an Irish Terrier, shaded sable or recessive red. Colors range from light tan to deep brownish-red.

Solid black Airedale Terriers are another type of off-standard color some breeders produce on purpose.

In the past black puppies appeared in litters bred from black-and-tan dogs. This indicates both of such parents carrying for recessive black (asa/a).

Lines of black Airedales might have been produced from such recessive black offspring (a/a). Or the black coat was achieved by introducing dominant black (KB/-) by outcrossing.

In the past there were some very, very rare cases of Airedale Terriers with brown instead of black pigment. Puppies will be born brown-and-tan and have a brown saddle when growing up.

But what makes an Airedale Terrier brown?

Brown coat is caused by having two copies of the recessive b allele at the B-Locus (b/b). Since almost all Airedales nowadays are fixed for a B/B genotype the chances for getting a liver-colored puppy are slim to zero.

The breed standard describes all the different traits an Airedale Terrier should have.

This includes his conformation and temperament but also the coat texture and color of an ideal representative of this breed.

The major kennel clubs often use their own standards provided by their affiliated breed club. These standards are usually similar in their general outline but can differ in many details like coat color.

Let’s see what different clubs have to say about the accepted Airedale Terrier colors[1-3]:

A dog’s coat gets its colors from two pigment types called eumelanin and phaeomelanin. Different proportions of colors in a particular dog’s coat create different patterns.

All Airedale Terriers are fixed for a saddle tan pattern with black and tan pigment. So regarding patterns and coat colors there is not too much variation.

So Airedale Terriers like most dog breeds can only produce some of all the possible colors. These are the genes and alleles involved in Airedale colors and patterns:

All Airedale Terriers are fixed for black eumelanin pigment (B/B D/D). Eumelanin is also the type of pigment that gives color to the nose, skin, nails or eyes.

Airedale with greying might have faded black hairs sprinkled throughout the saddle resulting in a grizzle pattern.

The phaeomelanin intensity on Airedale Terriers is tan, golden or an orangey red.

But some residual white like a small white blaze on the chest or a few white hairs between the forelegs can happen and is even considered a characteristic trait of certain strains of this breed[1].

The accepted patterns in a dog breed describe the distribution of colors in a dog’s coat.

All Airedale Terriers have a saddle pattern. Their E-Locus (E/E) and K-Locus (ky/ky) allow for patterned coat with both pigment types.

The saddle pattern is caused by the asa variant at the A-Locus (asa/asa).

The asa is one of the A-Locus alleles described only recently. So many testing companies still use the old A-Locus testing method where saddle tan and tan points are both reported as at!

A long time it was thought that saddle tan was a variation of tan points caused by a modifier gene. This seemed intuitive since puppies with both patterns are born with traditional tan points! But now we know that black back and black saddle are in fact different patterns caused by separate alleles at the A-Locus.

Since Airedale Terriers are fixed for many traits color testing is rarely necessary. Just keep in mind that if you do test and your dog comes back as at/at he is in fact asa/asa.

Airedale Terriers have dark brown eyes, a black nose and black pigment on their lips, eye rims, paw pads or nails. Dark eyes are preferred. Lighter eye colors happen but are considered highly undesirable since they take away from the terrier expression.

All Airedale Terriers are fixed for curly coat and furnishings.

On a shorthaired dog, the coat usually does not get long enough to cause a curly phenotype. These dogs only have a wiry curly growth pattern on areas with a longer coat like the beard or leg furnishings.

The breed standards of the Airedale Terrier ask for a hard, dense and wiry coat. The hair should lie flat on the back and should only have some crinkle or slight wave to it. It should never be long enough to look shaggy or ragged.

The undercoat consists of shorter and softer hair growing underneath the wiry guard hairs.

But in reality, many Airedale Terriers don’t have the low-maintenance coat typical for utility dogs. Many show-bred Airedales have a long beard and soft, fluffy and abundant leg furnishings.

Other Coat Types in Airedale Terrier

Some less common alleles in this breed can produce a non-standard coat type[4]:

A proportion of Airedales is genetically longhaired[4]. Combined with a curly coat and furnishings this turns the coat less wiry and causes pillow-like woolie leg hair and curly hair growth (like in Poodles).

Officially, a too soft or too curly coat is considered faulty. But today many breed fanciers actually seem to prefer these longer softer coats and deem them aesthetically more pleasing.

Another type of non-standard coat is seen in the so-called Redline Airedale Terriers (a term coined by breeder Henry Johnson). These originally working-bred dogs have short and wiry coats but only minimalistic furnishings with barely any leg hair and very sparse beards. They also often have a deep red-tan color.

Some breeders consider them a genetic throwback to old working and hunting dogs.

And yes, this might simply be a case of weak furnishings that popped up some time ago.

Considering normally furnished dogs can carry and produce weak furnishings this explanation doesn’t seem too far-fetched. But of course, some breed fanciers claim that these dogs are not purebred and rather got their shorter coat type from outcrossing.