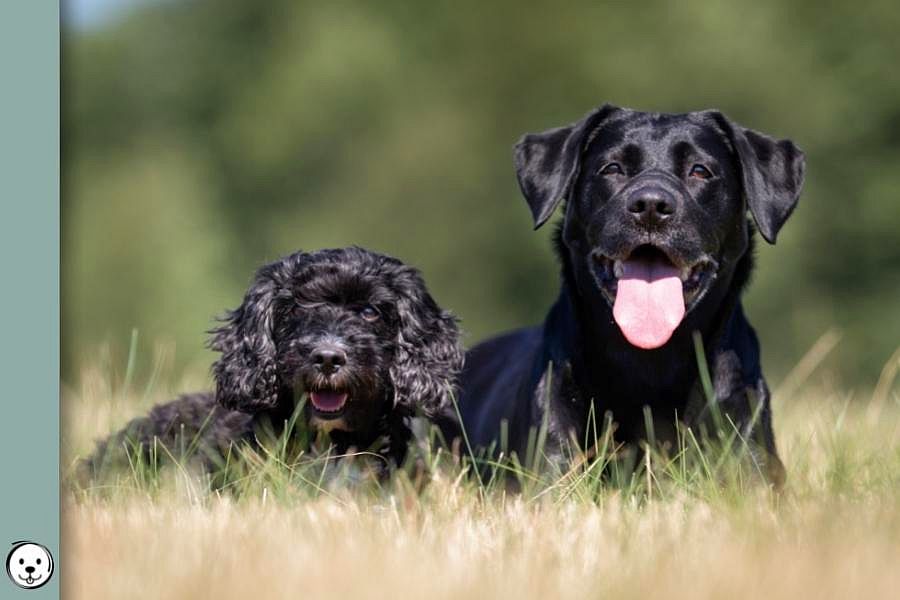 The dominant allele at the K-Locus (KB) inhibits the production of phaeomelanin and causes a solid eumelanin-pigmented phenotype in dogs that is commonly called dominant black. Here we look at the variations and genetics of dominant black coat in dogs.

What is Dominant Black?

The KB allele at the K-Locus promotes eumelanin synthesis and blocks phaeomelanin expression. Whatever pattern a dog has on its A-Locus (clear sable, shaded sable , agouti, saddle pattern, tan point, recessive black) will not be visible.

Example: Did you know that the majority of Labrador Retrievers has a tan point genotype (at/-) but can’t express tan markings because all black and brown Labs are almost always KB/ KB[2]?

If a dog is able to produce eumelanin the KB allele causes a solid eumelanin-pigmented coat in all pigmented areas. By the way, dominant black was named after the black eumelanin pigment color in a wild-type coat. But an affected dog can just as well be brown, blue or lilac.

Besides brown pigment and color dilution, there are many other traits like merle, domino, white spotting or greying that influence the colors and color pattern on a dominant black dog.

The K-Locus in dogs has gained the ability to play a role in pigment type switching several thousand years ago[4]. Different alleles at this gene locus can allow or prohibit agouti gene expression[1].

KBlack or KB is the dominant allele in this series and is responsible for a dominant black coat while kbr and ky allow for agouti gene expression.

Since KB is a dominant trait even one copy of KB is enough to produce a dominant black phenotype.

Dogs with an KB/- genotype can carry brindle (KB/kbr) or normal agouti expression (KB/ky). But a dog that is homozygous dominant (KB/KB) can only produce dominant black puppies.

At this point, we should mention that there is currently no commercial test available for the kbr allele. Since kbr has combined features from KB and ky it will show up in tests as KB/ky. So if your dog’s test comes back as KB/ky he might actually be KB/kbr, kbr/kbr or kbr/ky.

When will a dog be dominant black?

Dominant black causes a solid color in whatever shade of eumelanin a dog can produce in all pigmented areas. But first of all to express a dominant black phenotype a dog has to be able to produce eumelanin.

If a dog is recessive red (ee) the KB loses its ability to activate eumelanin production. So recessive red dogs can only ever produce phaeomelanin and dominant black simply can not be expressed.

Example: Labrador Retrievers are almost always E/- KB/KB and produce a solid black or brown coat. But since yellow Labradors are e/e KB/KB they can’t express dominant black since they can only produce yellow pigment.

Many different genes can cause a variety of phenotypes on dominant black dogs.

Eumelanin can be black, brown, blue or lilac depending on a dog’s genotype at the B-Locus and D-Locus:

These genes determine the color of all the eumelanin on a dog’s body.

They not only turn all the eumelanin in the coat a certain color, they also influence a dog’s nose color, skin color and even eye color.

White spotting is caused by a partial or complete lack of pigmentation on some areas in a dog’s coat. White can mask whatever color these areas would normally have had.

Ticking or roan in white areas has the same color the coat would have had without the white markings. So on a dominant black dog all ticking will have the color of a dog’s eumelanin.

Example: Dalmatians, German Wirehaired Pointer or English Pointers are counted as basically fixed for KB/ KB[2]. but any color is only visible in the spots and patches while most of the coat is covered by white spotting.

The G-Locus can cause fading of eumelanin color in dominant black dogs and gives the coat an almost multi-colored quality with a color transition between hairline to hair tips.

Affected puppies are born with full pigment color but less and less color is found in the growing hair until the hair is light gray, beige or even silvery white.

Progressive Greying needs continuous-growing coats to take full effect. This is mostly visible in long-coated and furnished breeds like Bearded Collies, Poodles and some other bearded curly dogs.

Merle deletes some pigment in eumelanin-colored areas and causes a marbled pattern of pigmented, diluted or even white patches. Since Merle only has an effect on eumelanin it affects all the pigmented areas in a dominant black coat.

Breeds where KB and Merle can appear together are bicolored Border Collies or Pyrenean Shepherd. And of course many color-bred dogs combine both of these traits so today there are also plenty of solid merle bully breeds, poodles or spaniels .

Great Danes take it one step further and can not only be black merle but also harlequin. In affected Great Danes a breed-specific mutation at the H-Locus modifies merle to express as white coat with black patches.

There are different alleles at the E-Locus (eA, eG and eH) that can cause domino or grizzle patterns. To put it simply domino reduces eumelanin production. This can cause a dominant black coat to express as agouti-like or a greyish pattern.

Older studies claimed that domino possibly had no effect on KB[3], but today we know that this is not true. But as unique and interesting a dominant black domino phenotype might seem it is also very rare.

Of course there are exceptions to every rule: