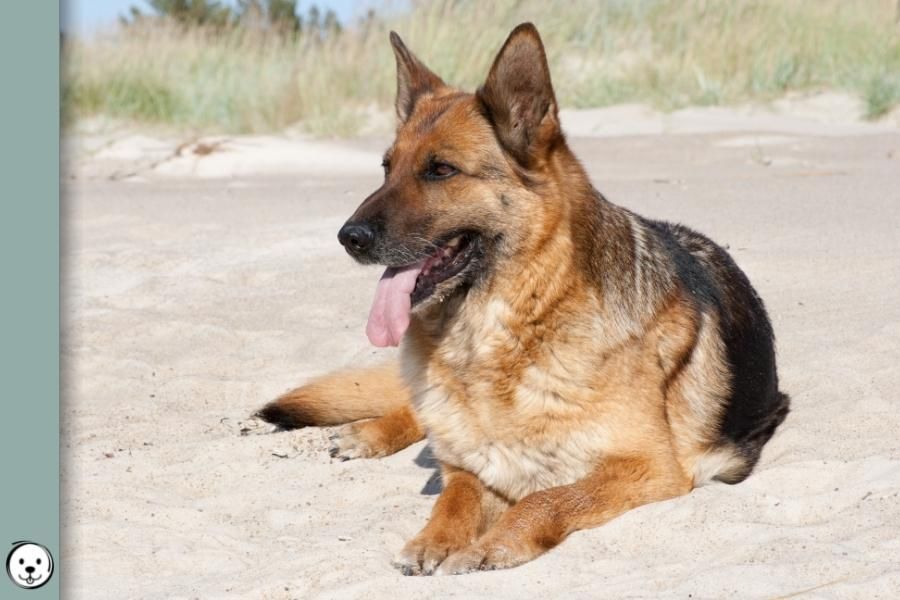 A dog with a black saddle has solid dark coat on his back and large tan markings covering his face, chest, shoulders, legs and underside. Dogs with saddle pattern are born with regular small tan points that soon grow to form a saddle tan pattern.

What is a Saddle Pattern?

Some dogs born with a black-and-tan pattern can change quite a bit during their first months after birth.

Growing tan markings can cause a phenotype called creeping tan. These areas can grow even further until there is only a black saddle left of the original black-pigmented areas.

Until recently a black saddle pattern was considered a modified version of the traditional tan point pattern[2]. The only available test looked for variation at the proposed RALY-Locus but the test worked only for a limited number of breeds.

But newer research shed some light on the complex mechanisms controlling the different A-Locus patterns. This gave us the ability to predict if a black-and-tan dog will develop a creeping tan or saddle tan pattern.

The A-Locus promotes phaeomelanin production in a variety of different pigment patterns.

Long time we only knew how to test for four different patterns: Ay (sable) > aw (agouti) >at (tan point) >a (recessive black). This test explains most patterns that are available in a variety of different dog breeds. But it also had its shortcomings, e.g. could not detect some patterns or would provide incorrect testing results in some breeds.

A newer approach to A-Locus patterns can distinguish between six different variants:

Black saddle (asa) is recessive to clear sable, shaded sable and agouti. It is dominant over tan point and recessive black.

A saddle pattern is caused by a particular combination of two regions inside the ASIP gene:

The wild-type version of the ventral promotor (VP) called VP2 produces clear phaeomelanin-pigmented areas without any banding on the dog’s muzzle, eyebrows, chest, belly, lower legs and under the tail.

The more active of two known versions of this promotor called VP1 produces bigger phaeomelanin markings that can extend to the dog’s head and back.

The hair cycle promotor (HCP) normally produces a tipped coat (HCP1) or a banded coat (HCP2). If the HCP loses its functionality (HCP3, HCP4 or HCP5) all banded coat areas will not have phaeomelanin bands and hairs will be all black. Dogs with saddle pattern so far all test as HCP4.

This combination or haplotype (VP1-HCP4) represents the new dominant yellow allele ASIPBS. Other haplotypes represent other alleles (see the A-Locus for more info).

A yellow dog with a black saddle usually is homozygous for saddle tan (asa/asa). Creeping tan with a yellow face and a dark hooded phenotype (often with a widow’s peak) is seen in dogs that carry tan point (asa/at).

Remember that tests applying the old method will report tan point and saddle tan both as at and can not distinguish between those patterns!

Dogs with saddle patterns are born with a traditional tan point pattern. But by the time they reach 18-24 months of age, the tan markings will have extended to cover most of the dog.

Not long ago creeping tan and saddleback were considered a modified version of the traditional tan point pattern.

We now understand that saddle tan is caused by a non-functional hair cycle promotor combined with an active ventral promotor. This produces big tan marking growing from the ventral area upwards but a solid black coat without banding in the remaining saddle.

Black Saddle phenotypes range from only very big tan markings (sometimes called creeping tan) on the head and legs to a classic saddle or even minimal saddle. There can even be banded or yellow hairs growing in the saddle giving it a more grizzled look.

A creeping tan phenotype can create a widow’s peak on a dog’s forehead resembling a similar pattern seen in a shaded sable coat. And a minimal saddle can be even harder to distinguish from a shaded sable dog.

The color of the big tan markings on a black saddle dog can vary from white to yellow or red. But for now, we can’t explain all factors that influence phaeomelanin intensity.

Although this pattern is called black saddle the saddle actually will have the color of a particular dog’s eumelanin.

So instead of a black saddle, some dogs will have a brown saddle, blue saddle or lilac saddle. Eumelanin is also used to give the nose, eye rims, lips, nails and eyes their color. So for example, a dog with a brown-based saddle pattern will also have a brown nose and amber eyes.

Melanistic masks add eumelanin to a dog’s muzzle. As seen in many German Shepherd Dogs this also works on dogs with saddle tan.

Brindle stripes add a striping pattern to all areas pigmented with phaeomelanin. So on a dog with saddle tan, every pigmented area but the saddle will be brindled.

White Spotting can make some of a dog’s pattern disappear. The combination of a black saddle pattern with white markings is often described as tricolor.

Ticking or roan are both phenotypes that cause some of a dog’s white spotting to get some of its color back.

At birth, white markings will be solid white but over the course of some weeks and months, some pigmented spots or fully pigmented hairs may appear inside the white areas.

These dots or hairs will have exactly the color a dog would have had at their location if ot wasn’t for the white spotting. So on a dog with a saddle pattern, some ticking or roan may have the phaeomelanin’s color while dots at the back will have the eumelanin color seen in the saddle.

Merle affects only eumelanin where it deletes some of the pigment in random spots. Since only the saddle on a black saddled dog produces eumelanin merle can only be visible in the saddle.

This is a combination regularly seen in the Norwegian Dunker breed but all in all this combo is quite rare.

In some wiry, curly or longhaired breeds eumelanin can not keep its full color and fades to a paler version. So black fades to grey and brown fades to beige.

Since progressive greying only works on eumelanin naturally only the dark saddle will be affected. A well-known example of this phenotype can be observed in Yorkshire Terriers.

Sometimes a dog will express a much paler phaeomelanin intensity on his belly, throat and muzzle than on his back. This is called countershading and creates an interesting effect since it doesn’t change eumelanin production.

In some hound breeds and northern breeds, a combination of domino and saddle patterns is known to happen sometimes. Domino reduces the amount of eumelanin produced in any pattern.

Domino will cause a saddle to shrink even more and can even cause a pale hair base with only some black tips. This can make a saddle way smaller and more grizzled than expect.

If a saddle was only small to begin with the few remaining areas with some black hair tips can look more like shaded sable than a saddle. In Beagles this phenotype is known as pied.

Saddle tan is very common in many different dog breeds, but is most common in hound breeds or German Shepherd Dogs: