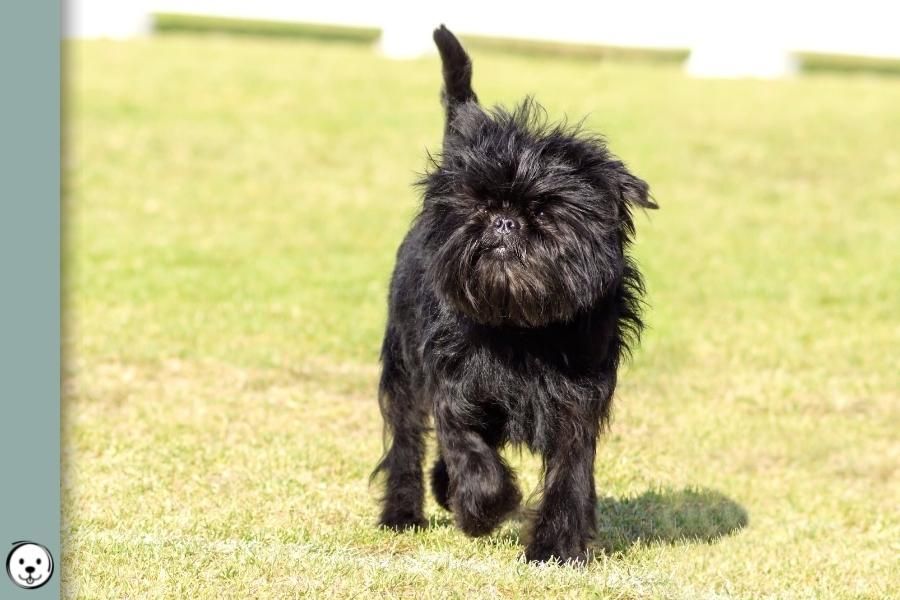 The Affenpinscher is a wire-haired and bearded toy dog from Germany. Affenpinschers come in a variety of different coat colors and patterns like red, grey, silver or black-and-tan. Some breed clubs only accept solid black which is the most common of all Affenpinscher colors.

Let’s have a closer look at the different Affenpinscher color patterns:

A black Affenpinscher is a solid-colored dog with black hair.

Most Affenpinschers are pure black with a black undercoat. But some of these dogs can have grey shading seen as a few white or silver hairs or a rusty cast to the coat.

Solid black Affenpinschers can be dominant black (Em/- KB/- or E/- KB/-) or recessive black (Em/- ky/ky a/a or E/- ky/ky a/a) since both traits occur in this breed.

These dogs are born with a solid black coat. But over time less and less pigment is distributed into the growing hair shafts. Why? A trait called progressive greying causes pigment to fade over time.

Some of these black-silver or grey Affenpinschers have a darker face while the rest of the dog turns grey. This is often seen in dogs that carry a variant for a melanistic mask (Em/-) which seems to protect some facial pigment from greying.

Progressive greying is untestable as of now. But the idea is that it is an incomplete dominant trait with a dosage-dependent effect. So it’s normal that some grey dogs turn a little paler than others.

These dogs are often clear sable without too much dark shading (E/- ky/ky Ay/-). And they can come with a black mask (Em/- ky/ky Ay/-).

But some red sable dogs have black hair tips producing a shaded sable pattern (E/- ky/ky Ays/- or Em/- ky/ky Ays/-). Dogs with black shading are called “Belge” according to the AKC standard[1].

The dark shading on a red Affenpinscher can be black. But if the dog has progressive greying this will turn some of its black hair tips zo a more grey or silver-grey color.

It’s worth mentioning that some of the solid red dogs in this breed seem to be recessive red (e/e)[4]. These dogs can’t produce any black pigment in their coat and will neither have black shading nor a black mask.

It can be virtually impossible to distinguish a clear sable from a recessive red coat since both only express red pigment. But recessive red dogs often have fading nose pigment which is considered non-standard in this breed.

Belge is a term for a red Affenpinscher with a black overlay commonly called shaded sable.

The amount of dark shading varies from dog to dog. And progressive greying can cause various shades of grey or silver mixed into the belge coat. And shaded red Affenpinschers additionally may have a black mask.

A black-and-tan Affenpinscher has a black coat with symmetrical red or orange-red markings on his muzzle, eyebrows, chest, belly, lower legs and under the tail. This is commonly called a classic tan point pattern (E/- ky/ky at/-).

Dogs with a tan point pattern can have a black mask (Em/- ky/ky at/-) that might cover up some of the tan markings on the dog’s face.

Since progressive greying occurs in this breed a black and tan Affenpinscher can also be affected. This would turn all the black in this pattern to silver or dark grey (although oftentimes masks are less affected).

The breed standard describes all the different traits an Affenpinscher should have.

This includes his conformation and temperament but also the coat texture and color of an ideal representative of this breed.

The major kennel clubs often use their own standards provided by their affiliated breed club. These standards are usually similar in their general outline but can differ in many details like coat color.

Let’s see what different clubs have to say about the accepted Affenpinscher coat color patterns[1-3]:

A dog’s coat gets its colors from two pigment types called eumelanin and phaeomelanin. Different proportions of colors in a particular dog’s coat create different patterns.

But Affenpinschers like most dog breeds can only produce some of all the possible colors. These are the genes and alleles involved in Affenpinscher’s standard coat colors and patterns:

All Affenpinschers are fixed for black eumelanin pigment (B/B D/D). Even if not present in a dog’s coat color pattern it is always eumelanin that gives color to a dog’s nose, skin, nails or eyes.

Some Affenpinschers show progressive greying which can cause some hairs to turn grey or silver.

The phaeomelanin intensity seen on red dogs or on dogs with red markings ranges from orangey tan to red. Longer furnishings are easy to bleach and can have a lighter shade of tan.

Affenpinschers shouldn’t have any white markings (S/S). But some residual white like a thin white patch on the chest or white toes simply can happen in any dog breed.

The accepted patterns in a dog breed describe the distribution of colors in a dog’s coat. Dogs can be solid-colored or have a pattern with more than one color.

And that can be quite tricky… Sometimes the same term is used for colors that are caused by different genes. And in other cases genetically similar phenotypes have many different names.

According to the FCI breed standard traditional colors once ranged from solid or dirty yellow or red to silver and grey, black-grey and pure black[2].

But the majority of today’s Affenpinschers have a solid black coat.

The FCI and the KC even have gone as far as to only accept black dogs. Maybe to distance themselves from similar breeds like the Belgian Toy Griffons.

And indeed, red or black-and-tan Affenpinschers can look very much like a Griffon Belge or Brussels Griffon.

Since this is a somewhat rare breed even in its country of origin. There aren’t too many breeders and not too many non-standard colorations like white Affenpinschers available.

So whatever an Affen’s coat color pattern, he will always have dark brown eyes, a black nose and black pigment on their lips, eye rims, paw pads or nails.

The Affenpinscher is a wirehaired dog with a characteristic mustache and bushy eyebrows. The long and shaggy facial hair stands off to all sides to underline the breed’s “monkey-like appearance“.

This toy breed’s coat type is described as neat but shaggy. The dog’s back is covered in very dense and harsh hair. The longer coat on the head or legs usually is somewhat less wiry.

This is the typical coat growth pattern of shorthaired dogs with furnishings.

Other Coat Types in Affenpinschers

Some less common alleles in this breed can produce a non-standard coat type[4]: