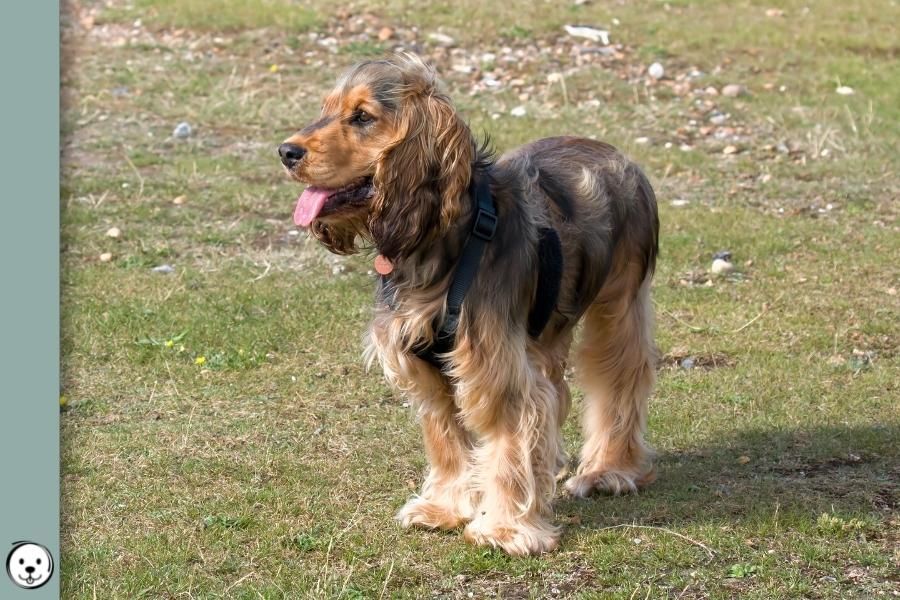 The eH allele at the E-Locus causes an interesting phenotype in Cocker Spaniels that either resembles a regular sable pattern or is described as a dirty red color pattern. Both of these phenotypes are actually caused by a version of domino similar to eA or eG in other breeds.

What is Cocker Sable?

The eH variant found at the E-Locus modifies any coat pattern a dog would normally express by partially inhibiting the expression of eumelanin. It causes pale undercoat and reduces black or brown areas while increasing phaeomelanin production.

The effect is very similar to northern domino (eA) and sighthound domino (eG) so eH is also considered a domino allele.

On dominant black dogs, eH causes a phenotype that looks a lot like regular “shaded sable“ in other breeds would look like hence the confusing name.

Cocker Sable is expressed as a sable-look-alike pattern on dominant black dogs with a tan point genotype (eG/- KB/- at/at). These dogs should be solid in all pigmented areas but eH causes the A-Locus pattern to become visible to some degree.

On dogs that can actually express a tan point pattern (eG/- ky/ky at/at) the eH variant causes a phenotype with black shading on red coat known as dirty red. It decreases the amount of eumelanin in the coat while promoting pale hair roots and larger tan markings than expected.

Cocker Spaniel domino is considered a rare coloration and is sometimes seen as controversial although Cocker Sable seems to be in the breed for almost 100 years by now. Most breed clubs consider sable a non-standard color, only some breeders try to keep this color alive today.

Cocker sable is caused by the eH variant (officially eH(D84N) or eHypostatic). This allele reduces eumelanin expression and produces more phaeomelanin than expected in any given background pattern.

Today many laboratories test for the eH variant. But there are no scientific studies and hardly any information that describes the mode of inheritance and expression of sable patterns in Cocker Spaniels.

Since eH causes a partially inhibited eumelanin production it has the ability to modify any coat pattern occurring in Cocker Spaniels.

Affected dogs express a pale cream- or tan-colored mask with dark pigment on the head, neck and blanket. Facial markings like a widow’s peak or a darker nose bar are very common.

Contrary to domino patterns found in other breeds eH doesn’t seem to fade phaeomelanin intensity quite as much. Many sable Cocker Spaniels express about normal golden pigment color.

Cocker Sable is mostly found on solid dogs, but can also be expressed together with piebald spotting or ticking and roan (aka sable roan).

Tan point patterns can be modified by eH to be expressed as a light red coat with dark hair tips. This is known as dirty red in Cocker Spaniel breeds.

Dirty red Cocker Spaniels can also have white spotting or express a ticking or roan pattern.